Apparently I have it all wrong and Australia is not experiencing a turbo-charged immigration boom after all, according to a long-winded post by Aidan Morrison at the Quixotic Quant Blog [my emphasis]:

The Population Ponzi story tells us that sometime in the mid-2000s the Howard government kicked the gate-open to mass migration to feed the mining boom, then an un-holy alliance between big retailers, property developers, and budget-stressed politicians allowed the gate to stay open ever-after. The sustained influx of immigrants post-boom can then explain most things weird and worrying about our economy, including per-capita real income falling, low wage growth, and high house prices.

The alternative story is that sometime in the mid-2000s the Australian Bureau of Statistics changed the definition of an official statistic called “Net Overseas Migration”. The arbitrary definition they had at the time was malfunctioning, and the next arbitrary one they changed to has been malfunctioning even worse. A blithely ignorant press didn’t even notice the change, let alone query the disfunction that inspired it, so the entire country has been putting their faith soaring population figure that has the integrity of custard. The harder alternative figure shows that our migration rate is actually flat…

And even worse than being accidentally oblivious to the error once or twice, you could be really loud obnoxious, and incessant about repeating the error, and all the incorrect conclusions you could draw from it. Here the gong has to go to Leith Van Onselen from Macrobusiness, who has to be the head cheer-leader for the very small clutch of economists indulging in this dalliance with the ‘Population Ponzi’ explanation for the mediocre economic performance of our economy. In a trend that saddens me for a fun, insightful business blog which I otherwise love reading and pay money to subscribe to, Leith is slowly turning half of Macrobuiness into a thinly econo-veiled anti-immigration rant. And he wheels out this graph and state-based ones (and longer ones with even more, larger definition shifts) again, and again, and again, and again to explain every imaginable economic ailment from low wages to crowded trains…

Now the baselessness of the Population Ponzi story is exposed. We’re not importing masses of people just to delay the impacts of population aging, so that a later generation can deal with that problem. We’re getting new people on long-term visas to replace the rising fraction of Australian’s population who are possibly still long term – but increasingly ‘part-time’ – residents. The Net Overseas Migration metrics have completely failed to capture the correct story.

…the moment someone starts claiming that immigrants are congesting our roads and there’s no way we can build enough infrastructure can keep up with their rate of arrival, (see Cory Bernardi and Mark Latham here) it’s time to grip your sides and start rolling around in the aisles in laughter. That particular rate of growth has unequivocally slowed. People who are overseas don’t drive their cars on the M4 in Sydney, or cram up the train stations in Melbourne.

1. The ABS always strings together their data after series breaks. It is really bad in the economic data where the whole concept of what they are trying to measure can change (like the 1998 CPI revision). You could do a similar deep dive into every ABS dataset and finish with more questions than answers.

2. Many people who use the data (including most of those people in your example) know there is a series break in 2006. But as you have shown, it doesn’t really make much of a difference in the end. The divergence with the raw arrivals/departures data that started in the early 2000s remains. The new 12/16 rule applies symmetrically to those who leave and arrive, and although the ABS notes that it increases the NOM estimate during their 2003-06 test period, this was kind of the point. They were classifying many arrivals as short-term (i.e. not in ERP) when they stayed more than 12 out of 16 months, but not consecutively. This applies to much of the international student cohort, of which there are now over 600,000, compared to 200,000 in 2001.

3. My point is, the discrepancy you point out between your physically present population (PPP) and the estimated resident population (ERP) is not primarily because of this change in methodology in 2006. The difference is simply the number of residents currently abroad, short term, at any point in time, minus short term visitors (under the new definitions of short-term). The census also won’t catch the million residents who are abroad that night.  And while short term departures are growing, the number abroad at any point in time will grow as well.

4. The new methodology means that the ERP is higher than the old methodology because it makes sense to count people who reside in Australia more than 12 out of 16 months as residents who need the type of long-term facilities that residents need. In my view, ERP is the more important concept economically than physical bodies on the ground on any day. It also matches more closely the way these things are measured internationally.

5. So if the whole issue boils down to net short-term movements what is causing the change since 2001-02? From ABS 3401 we see that this is mostly from the rise in short-term resident departures for holidays!
  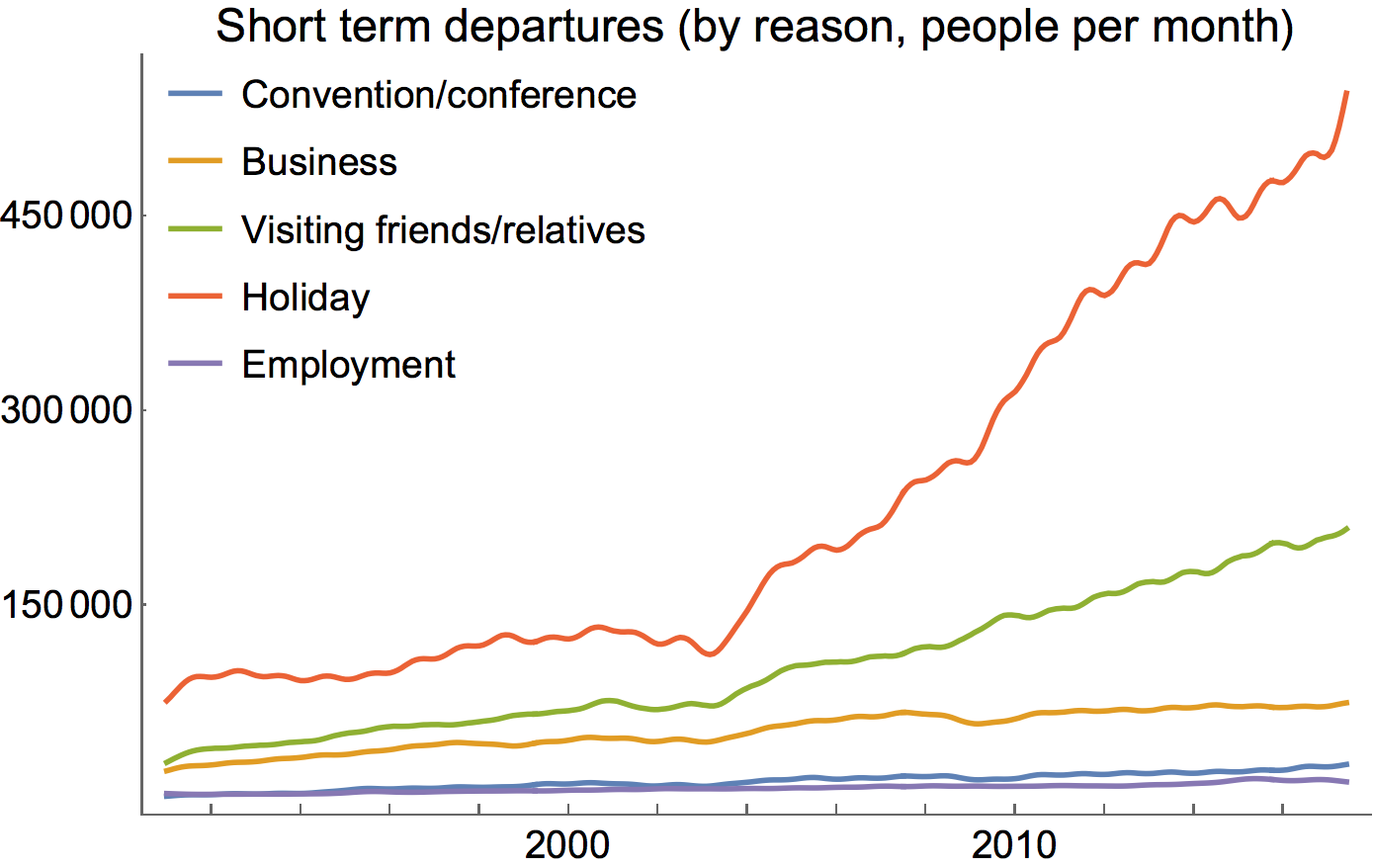 Also, mostly these trips are for less than a couple of months.
  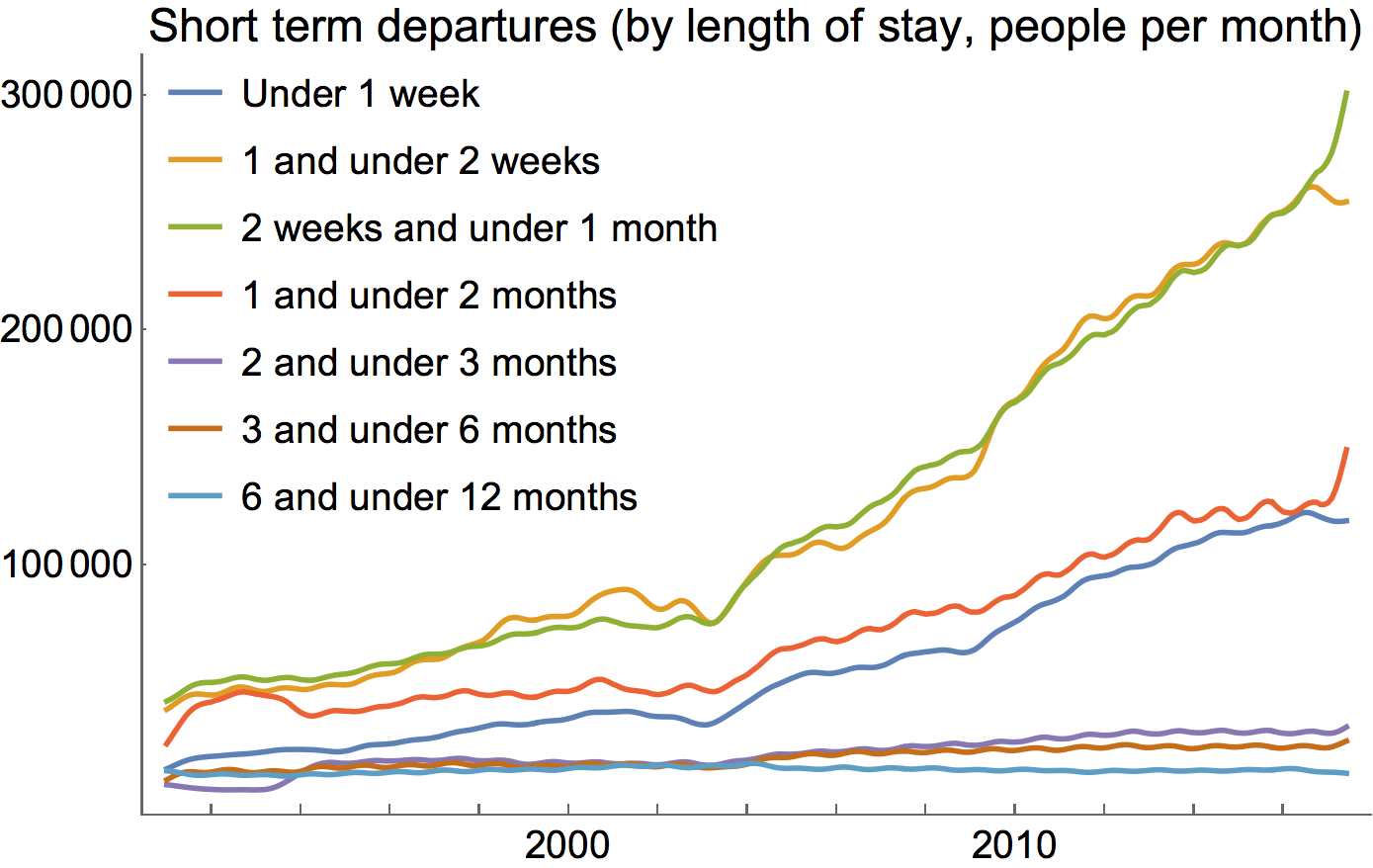 We can see that the increasingly popular destinations are NZ (big boost in 2003-04), Indonesia (likely Bali) and the US. Less so to China or India, as many might expect.
  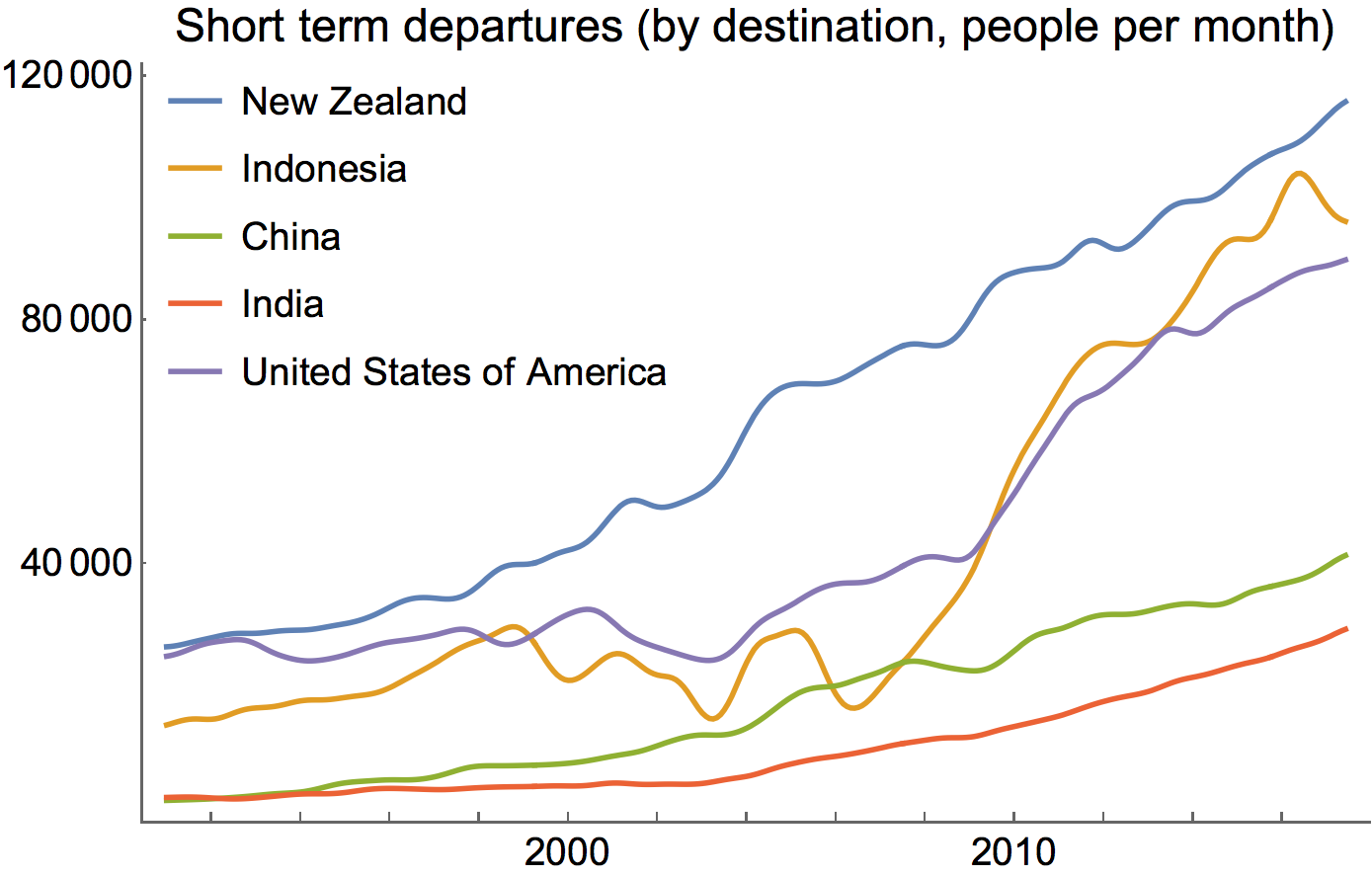 I would guess that retirees are a big portion of the post-2002 short term departures boom (a lot of baby boomers started retiring 10 years ago). There are plenty of anecdotes to back this up. And it’s now a hot button political issue that pensioners are getting the pension while on cruises and travelling abroad.

The data also shows that the number of people over 65 travelling abroad has tripled in the 10 years to 2015-16, with a relative decline in the share of short-term resident departures coming from people aged 30-60.

The other point to note is that both the baby boomers and their children (the baby-boomer echo) were, in the past ten years, at the stage of life where they are more likely to travel abroad.

We can see below that what data we have shows that people over age 60 have been a larger share of short-term departures recently, with people aged 30-60 being a declining share of the total. 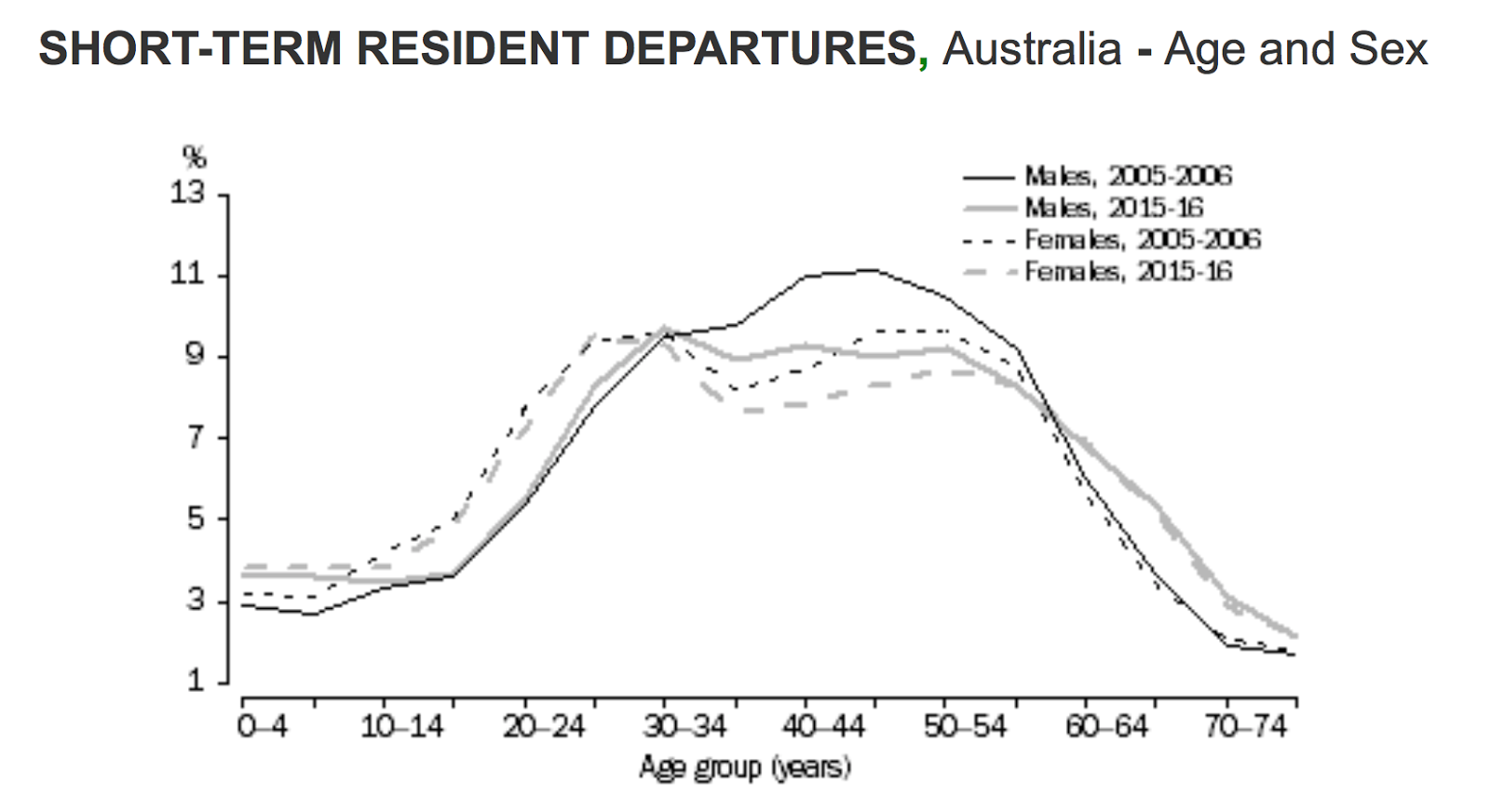 6. Which brings us full circle. The 2006 methodology change meant that some inward immigration which was previously considered short-term, like international students, is now considered long term (i.e. residents), while there has been a rise in short-term departures from baby-boomers and their children holidaying in Bali!

Should we subtract retirees on holidays in Indonesia and on cruise ships from our resident population figures? I suspect not. Do their holidays mean that inbound residents residing more than 12 out of 16 months don’t need to be considered in terms of housing and infrastructure needs? Probably not.

Overall, after a lot of thinking on this topic, I suspect that the ABS data, although imperfect, and although hiding a series break, is probably the ‘better’ metric to use in planning and economic analysis.

Are we supposed to believe that Melbourne’s and Sydney’s populations have not boomed primarily because of the migrant influx?

And are we supposed to believe that the projected rise in Melbourne’s and Sydney’s populations by 97,000 and 87,000 people per year respectively for decades to come will not be driven by expected ongoing mass immigration?

Omicron continues to wash through NSW and VIC