The Australian Budget has a history of running small deficits and surpluses with occasional blowouts. Contemporary history has seen General Government net debt to GDP approach 20% under Labor in 1995 and the Coalition in 2017. In between, a Coalition government under Prime Minister John Howard and Treasurer Peter Costello ran surpluses sufficient to pay net debt down to zero during Australia’s mining boom.

Ratings agencies have adjusted the sovereign credit rating over time to reflect this ebbing and flowing of debt. In 1975, Standard and Poors rated Australia AAA. By 1989 the rating had dropped two notches to AA. It was subsequently upgraded again to AAA as the Howard Government operated consecutive surpluses.

The major vulnerability for the Australian Budget is the external imbalance in an economy that runs persistent current account deficits. Because Australian banks borrow so much money in international markets largely to fund domestic mortgages they are constantly at risk of international liquidity shocks.

The Australian Budget steps in with public guarantees to the banking system when this happens. Thus, although the Australian Budget has relatively low debt-to-GDP metrics, credit rating agencies demand that they remain that way to preserve the AAA rating as a backstop to bank borrowing.

Australian politics insists that Australia sustain budget surpluses ostensibly because it is equated with good economic management. In truth, the surplus is simply a figment of the property bubble at the heart of the Australian economy that requires the support of the tax-payer to persist. The Australian Budget is the key stone in the Australian credit arch.

In recent years the Australian Budget has deteriorated as the structure of the economy has left is denuded of growth sources. As the mining booms passed and the enormous household debt (186% of GDP) stalled consumption and investment, fiscal deficits became a key component in GDP growth.

As well, the disintegration of Australian political integrity associated with the end of the mining boom period doomed the Budget to successive regimes of neglect.

This very obviously undermined its role in the above system exposing Australia to deeper adjustments during future periods of global stress. Earlier this year, Productivity Commission data revealed that 47.8% of Australians aged under 25 were enrolled in a bachelor degree at university. In turn, it confirmed that the Rudd Government’s goal to increase university participation rates to 40% have been exceeded. According to data published on the federal government’s Course Seeker website, this explosion in enrolments Around 90% of imported goods now come into Australia tariff-free, with cars, furniture and knitted goods among the remaining 10% of goods on which tariffs apply. The federal government currently collects around $1.5 billion from tariffs, or just 0.3% of its total tax take, and the amount that it collects will fall further as new Greens leader Adam Bandt will use today’s National Press Club speech to call for free childcare and dental care for all Australians. It is estimated that this would policy cost about $18.2 billion a year, but Bandt will contend that it can be financed by new taxes on the ‘super-profits’ of large gas companies and The National Farmers’ Federation (NFF) and National Seniors Australia (NSA) have proposed reducing the income tax rate on pensioners’ earnings in order to address labour shortages. At present a single person can earn up to $480 per fortnight without affecting their pension entitlement, but they incur an effective marginal tax rate of 50% if their The $0.221-per-litre fuel excise reduction is scheduled to end on 28 September. The Coalition stated in its pre-election Budget in March that the fuel excise cut had to be temporary due to its cost, with the Coalition also demanding budget repair from the new Albanese Government. Opposition Leader Peter Dutton is now urging Labor to In 2015, the newly elected Victorian Labor Government tore up the contract to build the East-West Link, with Premier Dan Andrews declaring “we will never again see a situation where a government, too embarrassed to submit a business case to Infrastructure Australia, lies, deceives and misleads all Victorians on infrastructure priorities”. Seven years on and The Fair Work Ombudsman is currently investigating 11 universities nationwide for allegedly underpaying their staff. This comes after a Senate inquiry into wage theft revealed in March that half the nation’s 40 universities have been implicated in staff underpayment. Meanwhile, analysis of employment data from eight universities in Victoria highlights the growing issue of insecure The Australian National Audit Office (ANAO) on Thursday handed down a scathing assessment of the former Coalition government’s $1.38 billion Building Better Regions Fund (BBRF). The audit found two thirds of funded infrastructure projects were “not those assessed as being the most meritorious”. Liberal-held seats received twice as many grants as Labor electorates, while Nationals Communications Minister Michelle Rowland recently confirmed that Labor has abandoned plans to privatise the national broadband network for the time being, and that it will scale back proposed 3% per annum wholesale broadband price increases that the former Coalition government had directed NBN Co to implement to recoup costs. There is also speculation that Labor Deary, deary, me: Dr Chalmers warned of a “confronting” update on the country’s economic and fiscal position, but his statement to the parliament painted a picture of a nation well-placed to transform challenges into opportunities. And despite previously downplaying the prospect of improvements to the budget because of record high commodity prices, the Treasurer now The Age Editorial has demanded the $580 million 1000-bed quarantine hub in Mickleham Victoria be shut down as it is no longer needed: We are unlikely to get any recognition that it was a poor use of taxpayer money. What we do get is optimistic claims that it could yet be used to house Ukrainian Commissioner of Taxation Chris Jordan has compared tax avoiders to drug cheats, with his comments coming after the ATO and Rio Tinto reached a $1 billion settlement last week. Jordan says the ‘model’ that resource companies have been using to avoid tax has been broken by the ATO, resulting in savings to taxpayers of around Below is the Executive Summary of a new paper by Bob Birrell and Ernest Healy from The Australian Population Research Institute. Like MB, it argues that the Andrews Government’s Suburban Rail Loop Project (SRL) is unnecessary, wasteful and will choke the state in debt. The SRL also highlights one of the many costs of mass 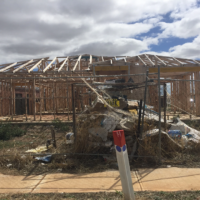 Australia’s home builders continue to fall like dominos with 10-year old Sydney building company Jada Group yesterday joining the long list of collapses, owing $2.4 million to 45 creditors. Like the other collapses before it, the soaring cost of materials was cited as a key factor behind Jada Group’s demise. Indeed, the next graphic from Oh Albo, or should I say, Jim Scullin: Anthony Albanese says he will pursue a “large” legislative agenda beyond what Labor committed to at the election – despite growing economic challenges – with the October budget to be focused on finding savings without raising taxes. In an interview with The Australian, the Prime Minister said Treasurer Jim Chambers has again ruled out the idea of introducing a windfall profits tax, despite Nobel prize-winning economist Joseph Stiglitz having personally lobbying Chalmers to adopt such a tax. Stiglitz contends that a windfall profits tax is a “no-brainer”, claiming that it would discourage companies from putting up their prices. He also says that Transport experts have called for Dan Andrews’ Suburban Rail Loop – a 90 kilometre orbital rail system that would run underground between Cheltenham and Werribee at a cost of up to $120 billion – to be scrapped. They are concerned that the obscene costs and resources consumed by the project risks “monopolising public transport spending Melbourne’s $10 billion airport rail project will reportedly commence construction this year following the belated release of the project’s business case: Global construction giants have been short-listed to build two key sections of the $10 billion Melbourne Airport Rail Link – including the Tullamarine station. Federal and State infrastructure ministers have lauded progress being made The head of the peak body representing universities will reportedly urge the federal government to boost funding to the sector and increase access to university education in a bid to ease skills shortages: In a speech to the National Press Club on Wednesday, Universities Australia chair John Dewar will outline how the government can reset After spending month’s attacking the Morrison Government’s JobKeeper waste, The AFR’s Joe Aston has turned his sites on the ‘Teal’ independents for sooking about only receiving five parliamentary staff rather than eight following the Albanese Government’s decision to reduce their allocation of personal advisers to one each (plus four electorate advisers): Five days have elapsed, By Stephen Halmarick, Chief Economist at CBA: Key Points: A stronger economy than that expected at the time ofthe March 2022/23 Budget is helping deliver a better-than-expected budget outcome for 2021/22 –as we anticipated. As signalled by the new Treasurer, it will be important for fiscal policy to tighten along with monetary policy to help Deloitte Access Economics has released an analysis of state budgets, which shows that Victoria is not forecast to return to Budget surplus until 2025-26: By which time, Victoria’s net debt is forecast to reach 27%, and has grown much faster than any other state over the past two years: Moody’s downgraded Victoria’s credit rating from In the late 1990s, Australia privatised the system that helps the unemployed find work. The idea was that by paying employment service providers for each person they placed into a job, the process would become more efficient. Instead, a parasitic industry developed with around 40 privately run employment agencies earning millions in fees from the