By MacroBusiness in Commodities, Featured Article

Courtesy of Sober Look: China’s Ministry of Commerce blamed the increase in vegetable prices on “strong winds and rainfall in the country’s eastern regions” that “disrupted production and logistics.” Nevertheless vegetable prices are up 15.4% over the past four weeks. China Daily: – The wholesale prices of 18 types of vegetables in 36 cities rose 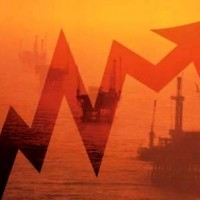 By MacroBusiness in Commodities

Courtesy of Sober Look: Brent crude oil priced in euros hit a new high today of €94.83/barrel, exceeding the highs reached in 08 as well as early this year. Source: Bloomberg This rally has been driven by four factors: 1. The euro is down close to 15% over the past year. 2. Draghi’s “Believe me, Yesterday former Treasury Secretary Ken Henry appeared in the below ANU video at the AFR in which he complained about the state of public policy debate (no arguments there), celebrated the fiscal response to the GFC (no argument there, either, beyond the FHOG, which wasn’t Treasury’s idea), mentioned in passing the challenge of the Australian 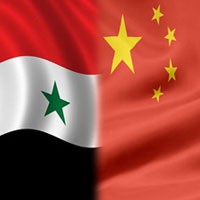 By Flashman in Commodities, Featured Article

By Michael Feller Reports last night that Beijing would receive an envoy of Syria’s Assad regime will no doubt rekindle Western commentary that China is supporting a fellow dictatorship in the vain hope that it can stem the tide of freedom and democratisation that is sweeping the Arab world. Yet the reality is a lot After a few days of stability, the ore price slid again yesterday: And the charts: And Chinese steel prices: The recovery in Chinese bulk shipping indexes remains plateaued: The ore price fell again yesterday: And as the chart shows, we are now well clear of the neckline on the head shoulder break, which now looks like upside resistance: For those that don’t think that this pattern is text book then this week’s RBA chart pack may convince: Notice the left hand chart with By __ADAM__ in Commodities

There are some hopes that Chinese stimulus will work wonders.  Rio Tinto, for instance, believes that the stimulus will support demand for their iron ore.  Chief executive Tom Albanese said in today’searnings announcement: Although sentiment remains negative in Europe and the US recovery is still fragile, our order books are full and we expect Chinese GDP growth 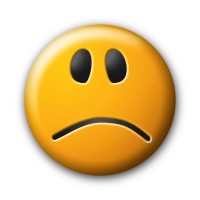 Sounds like the annual Diggers and Dealers mining pow wow is a little more downbeat this year. From the AFR comes this quote from Neville Power, CEO of Fortescue: “We have not seen anything like the tight labour supply that was forecast,” he told media following a presentation at the Diggers & Dealers conference in Kalgoorlie. Iron ore remains impressively weak. In the past, when the price has fallen swiftly it has to rebound just as quickly. There is no sign of that so far in this round of weakness. Here’s yesterday’s prices: And charts: Chinese steel is still falling: And the coastal bulk shipping rallies have stalled for now: There is Friday saw a little more downward pressure on the iron ore price but coking coal was smacked for another 5% last week: Newc spot bounced last week adding 3.5% to USD85.65/t, while coking coal continued its decline falling 5.5% to USD182.27/t. Although prices at the premium end of the thermal coal spectrum gained ground, a succession of utility tender By Chris Becker Over the weekend, reports continued to emerge following BHP-Billiton’s (BHP) announcement of a large impairment charge on its US shale gas assets on Friday, that expansion plans in the Pilbara will be put on the backburner. CBA analysts first reacted by cutting earnings forecasts at BHP – but this already looked priced Not a lot of movement in the ore complex yesterday but what there was was not encouraging with spot easing and swaps reversing to their lows: The bounce in iron ore looks weak. Rather like a dead cat. Here’s yesterday’s moves: And the charts. No change to steel prices: But 12m iron swaps reversed substantially: Maybe a test of the low or straight through? The rally in China’s bulk shipping indexes is slowing too: The rally could be more short lived The RBA commodity price index for July is out and shows a 2.4% fall for July: Preliminary estimates for July indicate that the index rose by 1.3 per cent (on a monthly average basis) in SDR terms, after rising by 0.3 per cent in June (revised). The largest contributors to the rise in July were Find below ANZ’s new commodity price forecasts, which include material downgrades to the iron ore complex. The ANZ team is excellent. Still, I can’t help feeling that an average price of $140 early next year is pretty bullish. ANZ Commodity Insight – Price Revision My call for a short term bounce in iron ore is firming up. Overnight we saw positive moves across the complex: And to the charts. For steel: As well as ore itself: Looks like the head and shoulders pattern may miss, which is good news to say the least. Nonetheless, I would caution against hopes Here’s your daily update ore prices. Not a lot of action yesterday but prices still fell on the spot market. In fact, they took out last year’s October low and the neckline on our scary head and shoulders pattern: The break is minor and may be bear trap but even so not encouraging. Neither is Just when you thought it might be safe to wade back into bulk commodities, coking coal gets crunched. From the ANZ Commodity Daily: Newc spot added 1.5% to USD82.8/t last week in light, macro-driven trade, while coking coal tumbled 9.7% to USD192.9/t as producers offered significant discounts to attract buyers. Despite the price cuts, buying interest is reported Here are Friday’s closing prices for iron ore: And the charts. First, Chinese steel: In short, prices fell again, despite rumours of monumental regional stimulus packages. There is clearly still fundamental weakness in the steel market. And for ore: The price of $116.20 is right on the neckline support of last year’s crash at $115.89 Here’s your morning ore update: So, 12 month swaps finally found a bit of support even if spot continued its descent through the neckline of its head and shoulders pattern. Given the hand-wringing that has suddenly seized the MSM over iron ore, one can’t help wondering if we’re not at the bottom here, at least By Flashman in Commodities, Featured Article

By Michael Feller Like oil, which we analysed in MacroInvestor on Monday, the iron ore market is awash with divergent indicators. While spot and swap prices have been tracking lower in recent weeks – analysed today at length by Chris Becker and before that by David Llewellyn-Smith – many an investor has lost his or

As predicted, coking coal is now breaking down in sympathy with iron ore. From the ANZ commodity daily: Newc September futures added 0.2% to USD87.8/t, while coking coal dropped sharply to USD202.1/t on reports of distressed cargos being offered at significant discounts. The sentiment surrounding coking coal has deteriorated in recent days due to continued concerns about weak demand, high By Chris Becker in Commodities

By Chris Becker The thundering falls of iron ore continued overnight with spot prices falling almost 4%, and swap by nearly 3% with steel (rebar/billet) slipping slightly: This was on the back of news that Chinese buyers have asked for deferrals on shipments – from the FT: Traders and analysts said that Chinese buyers And to today’s iron ore round up: So, a decelerating fall. But not much fun to be had in Chinese steel with billet playing catch-up to rebar weakness: By David Llewellyn-Smith Why is the AFR backtracking on the Deloitte report it rightly cast as the end of the mining boom yesterday? Talk that Australia’s mining boom will end in the next few years misreads the Deloitte Access Economics report on the front page of this newspaper yesterday. Rather than ending, the boom is 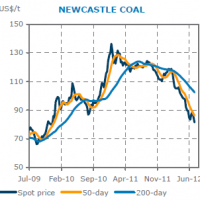 Fresh from this morning’s gloom over iron ore, comes this morning’s ANZ commodity report with the news that thermal coal is also plumbing new lows and coking coal is weakening: Newc spot dropped 4.8% last week to USD81.5/t, while coking coal fell 0.7% to USD213.6/t. Prices have continued to decline following muted buying and high inventories. In addition, The Friday close for iron ore was not pretty. Here are the key prices: And the charts, first steel: And now ore: Shanghai rebar and iron ore 12m swaps have broken their October lows well and truly. It’s clear air below. Spot will follow. No idea how low this goes, but I wouldn’t be at By __ADAM__ in Commodities

I have mentioned a couple of times that coal inventory in China has reached historical high both in ports and at power plants as demand for electricity (and hence coal) slows amid slowing economic growth, while production of hydroelectric power picked up recently. The chart below is from Goldman Sachs, which shows the coal inventory days at major Courtesy of Sober Look. Here is a good summary of commodity returns as of the end of last week. Overall the CRB commodities index is down 3.1% year-to-date. The index was down as much as 12.5% back in June but recovered as the North American drought pushed up agricultural commodity prices (10.8% rally in less than a

Find above the latest spread of key iron ore prices. Chinese steel prices have rolled over and are falling, both billet (green) and rebar (pink). 12m iron ore futures have busted support and are threatening new lows vis-a-vis last year’s plunge. Iron ore spot is sitting right on the support that has held since last