New Zealand Prime Minister Jacinda Ardern suffered another blow this week, with Roy Morgan reporting that her Labour Party coalition remained well behind in the polls, trailing the National coalition by 6.5 percentage points: As shown above, support for Ardern’s Labour Party began to fall in October 2021 after the Reserve Bank of New Zealand (RBNZ) commenced its rate hiking cycle. Since then, Labor’s vote has plunged a whopping 11.5%, meaning it would comprehensively lose office if an election was held now.

The surge in inflation, cost of living and interest rates has driven both consumer and government confidence to near record lows, suggesting Kiwis are extremely unhappy and blame the government for their plight: 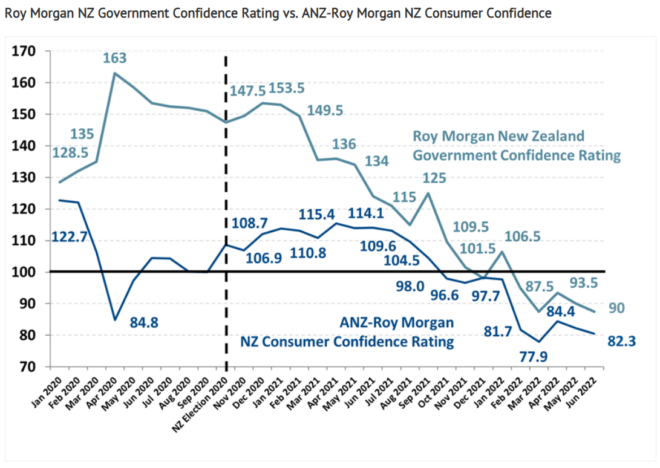 Kiwis are unhappy, and they blame the government.

The collapse in consumer confidence is also a bad omen for New Zealand’s economy, given its historically strong relationship with household consumption – the economy’s biggest growth driver. As illustrated in the next chart from ANZ, consumption spending is likely to collapse to recessionary levels if past correlations hold: A consumption-driven recession on the cards? The RBNZ on Wednesday hiked the official cash rate (OCR) another 0.5% to 2.5%, which was the third double rate hike in a row. It also signaled further aggressive interest rate hikes in a bid to tame inflation, and recommitted to its ‘forward track’ guidance of a 3.9% OCR by September 2023, which would coincide with next year’s election.

Also on Wednesday, the Real Estate Institute of New Zealand reported that house price falls had accelerated and broadened to every major market.

The prospect of a deteriorating economy, rising mortgage repayments and falling house prices are a lethal cocktail for Jacinda Ardern’s Labour Government, whose biggest roadblock to re-election is now the RBNZ.