As we know, Australia’s household saving rate boomed last calendar year on the back of lockdowns (which reduced expenditure) and massive stimulus (which increased disposable income).

An enormous $187 billion of household income was saved in calendar year 2020 – more than double the previous peak of $80.5 billion saved by households in 2015: There are 851 words left in this subscriber-only article.

Turns out, household savings are booming across the globe, as illustrated by the next chart via SoberLook at Twitter: 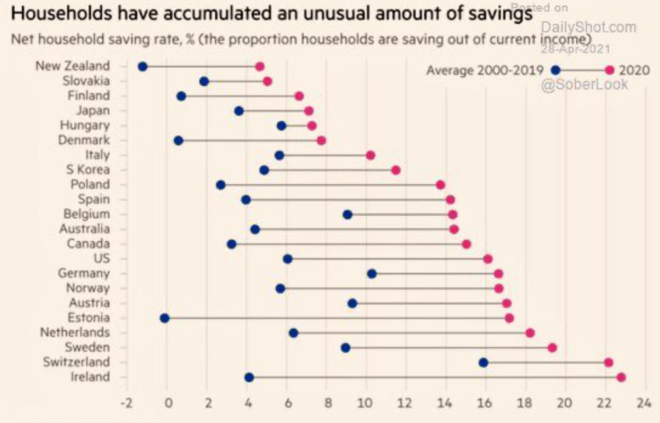 Household saving rates have boomed across the globe.

As you can see, Australia’s household savings rate is only middle of the pack, lagging well behind several European nations, Canada and the United States.

Part of the reason is that most other nations experienced far longer lockdowns last year, which obviously limited the ability of households to spend.

The bigger issue going forward is that there is now a massive war chest of savings (effectively unspent stimulus) available to be spent across the world’s economies, which has coincided with a syncronised boom in asset values (both equities and property).

It is fair to conclude, therefore, that the global economy is facing an epic consumer-driven boom as savings are spent and the ‘wealth effect’ takes hold.