The Guardian’s economics poster boy, Greg Jericho, has written another article chock full of shiny charts attacking the federal government’s inability to drive unemployment down and wage growth up.

Jericho’s key points are as follows:

The next chart encapsulates Jericho’s arguments: Australia’s real GDP per capita growth has stagnated since the GFC.

Regular readers will know that we agree with Greg Jericho’s points and have argued similar for nearly a decade. The difference is that unlike us, Greg Jericho deliberately ignores one of the key drivers of Australia’s sluggish per capita GDP and wage growth: mass immigration. Why? Because it is supposedly racist to suggest that Australia’s immigration intake was far too high:

“Immigration – because there are many desperate to hate – must be treated with extreme care by politicians and journalists… The inherently racist parties will seek to use any discussion and any seeming evidence of the negative impact of migrants as fuel to burn their fires of hate”.

Because of this view, Greg Jericho never mentions immigration, despite its obvious deleterious impacts on the labour market and wages. But the proof is in the data. 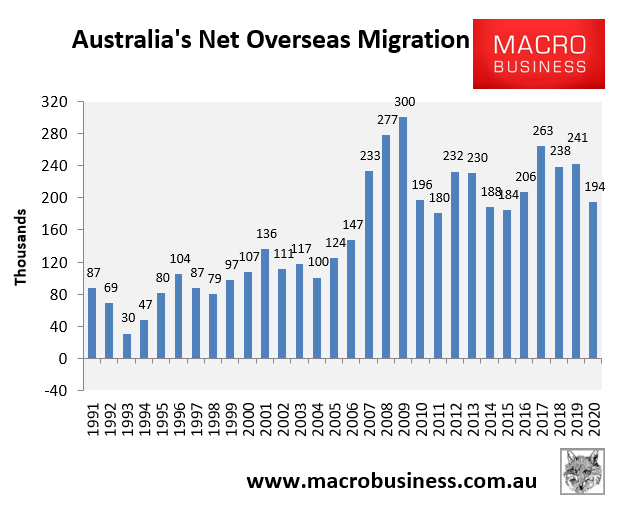 This huge increase in migrant workers flooded the labour market, making unemployment higher that it otherwise would have been and wage growth lower.

Heck, even the Australian Treasury’s own propaganda report, entitled Shaping a Nation, explicitly acknowledged that the overwhelming majority of Australian jobs growth went to migrants between 2011 and 2016: The flood of migrant workers also contributed to Australia’s productivity decline since 2005 by congesting our cities, driving up the cost of infrastructure provision, and discouraging firms from adopting labour saving technologies and automation (explained here).

Australia’s labour productivity collapsed after 2005, coinciding with the boom in immigration.

The biggest risk to Australia’s labour market is the Morrison Government’s planned reboot of the mass immigration program via:

If the pre-COVID level of migration was restored, an extra 200,000 workers would enter the Australian labour market every year. This would necessarily drive up unemployment and put downward pressure on wage growth (other things equal), making it impossible to reach the new 4.5% unemployment target (let alone the 4% championed by Jericho).

Despite this threat, Greg Jericho refuses to question the Coalition’s immigration reboot because to do so would supposedly be ‘racist’ and ‘hatist’.

Yet it is precisely because of the Fake Left’s failure to rationally discuss immigration that ordinary Australians have been pushed to “the inherently racist parties” that Jericho hates so much.

AIG on the services PMI: A decent