As part of my “Crashlist” I regularly follow the spot price (in USD) for gold, silver and oil as they are the three benchmarks that measure the strength of the global economy, the value of the US dollar and the speculative excess inherent in modern global markets.

Today we are seeing expectations of a similar move in Oil prices (almost doubling in price) as the Middle East troubles develop.

Crude prices will touch $200 a barrel if the Arab revolution spreads to Saudi Arabia, the Centre for Economics and Business Research (CEBR) said on Friday.

… the revolutions around the Arab world have pushed up the price of oil which had temporarily stabilised at $116 yesterday. This is 38% above its average level for 2010. And if the unrest spreads to the Gulf states and Saudi Arabia, the price could rise to $200 easily…

Of course Silver’s peak in January 1980 was also partially the result of the Hunt Brothers attempt to corner the market, perhaps a fairer ratio to use would be that seen later in October 1980 which was a Silver/Oil ratio of .56, which would translate to a Silver price of $112 with the same ratio and Oil at $200.

Of course it’s just speculation that Gold/Silver will reach exactly the same ratios as seen in 1980 or that Oil will reach $200 in the near future, however the Middle East unrest seems far from over and I think an energy crisis developing and the prices mentioned above being reached are a definite possibility.

Silver spiked and closed above $35.50 last night, a new intraday and daily close record for the current bull market. I suspect the rise that we see over short to medium term is going to absolutely blow minds, many will miss out and buy too late on the way up. The blowoff peak is likely to see an almost as shocking correction on the other side, so it is important to be ready to sell, have an exit plan and put it into action when your targets are met.

He makes a valid point that this comparison analysis is just speculation – I too am wary of linking one chain of events from previous economic and monetary era to the current day system: most of which no one truly understands how it works.

Regular readers will have seen this “Phase of Bubble” diagram before: Where is gold/silver now? Or the AUD?

It is easy to quickly compare the gold price to this diagram, and make a subjective judgement of what phase it may or may not be. This linear scale chart of the 10 year bull market in gold (in USD) gives a solid indication. 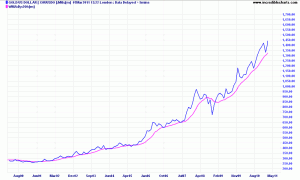 Was the GFC the Bear Trap?

Technical and charting analysis (plus monetary analysis of the money supply, interest rates and the real rate of inflation) all help the trader and investor alike in picking changes in trends or an acceleration of an underlying trend.

But sometimes, the best indicators are more public, as BB continues:

The Mania Phase
The hysteria around Gold and Silver at the peak of the mania phase is likely to be intense and hard to ignore, so it’s important to be mentally prepared for it. One of the most prominent that I came across today, was this recent front cover to SmartMoney magazine:

Here is a recent A Current Affair video on Gold: Gold Buying Investigation

Granted it’s more about selling Gold (and not getting ripped off), than buying, but they do cover the investment side of it briefly at the start of the video.

Gold and especially Silver have been getting an increasing amount of media coverage as they continue to rally out of their early year lows. Especially now that the rest of the market is tracking sideways/down the spotlight is on Gold and Silver as they continue to rise in the unstable conditions that the Middle East/Northern Africa troubles are presenting.

I am still of the opinion that Gold/Silver are on the verge of going truly parabolic within the next couple of years. As I’ve pointed out previously, in the last 2 years of the last Gold bull market the price Quintupled ($169 to $850) and I suspect this bull market will end with an equally impressive move.

I am no Michael Pascoe-bashing gold bug commentator – far from it. I contend that gold may have a legitimate place in a future monetary system, given that the likely path to a sustainable non-debt based economy may require a deflationary gold standard.

But as a trader and empiric investor, I see gold, silver and oil for what they are and how they behave: speculative commodities, whose price activity is supported by fundamentals, but the trend is completely beholden to the vagaries and behaviour of market participants (i.e traders, hedge funds, and “the crowd”) and non-participants (e.g the Princes on Martin Place) alike.

Oh how times change. For the first 18 months of

The ferrous complex was still riding the hot

Grantham: Superbubble about to burst

From the always excellent Jeremy Grantham at