After lobbying the NSW and Victorian governments for assistance in June, one of Australia’s largest home builders – Metricon – continues to teeter on the brink of collapse. Yesterday, it unceremoniously sacked 225 employees over Microsoft Teams in a desperate bid to reduce costs:

The move will impact 9 per cent of its workforce…

Most of the roles that will go are not in building or construction itself, but in front-of-house jobs like sales and marketing.

“We are working to restructure our front end of the business given the current climate and the need to move forward more efficiently,” he said.

Already, Australia’s home building industry is in crisis with literally dozens of firms going under in 2022.

The main cause is the sharp rise in input costs across the construction process, as shown in the below graphic from Fairfax: 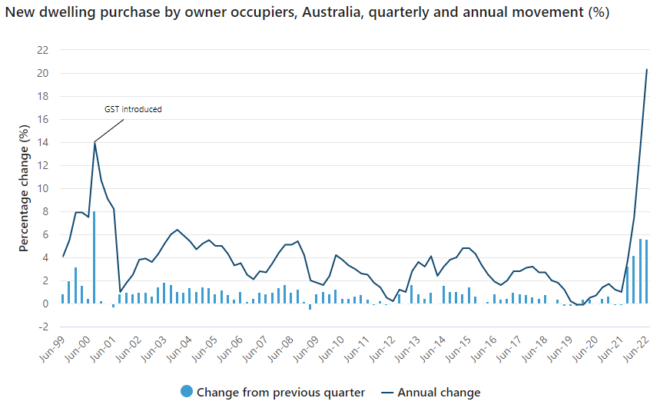 Despite a record number of homes under construction across Australia (see next chart), builders are falling like dominos because the cost of construction has risen above their fixed price contracts. Record number of homes under construction.

In short, Australia’s home builders are experiencing a “loss-making boom”, whereby they are busier than ever, but also losing money on every home built.

Many more builders will go under before the supply pressures ease.