They say that god created economists to make the meteorologists look good, which we basically concur with, but it probably hasn’t ever been of a bigger relevance to combine weather- and economic forecasting than just now. The current extreme energy crunch is clearly weather-linked and even the Green Eurocrats probably hope for an extraordinarily warm winter this year. Natural gas prices are up 55% over the past three days as inventories are running scarily low across Europe ahead of the winter season. The only winner in this energy crunch is Vladimir Putin.

Let’s have a look at the situation.

Chart 1. There is currently a 1-to-1 correlation between gas prices and electricity prices in Europe 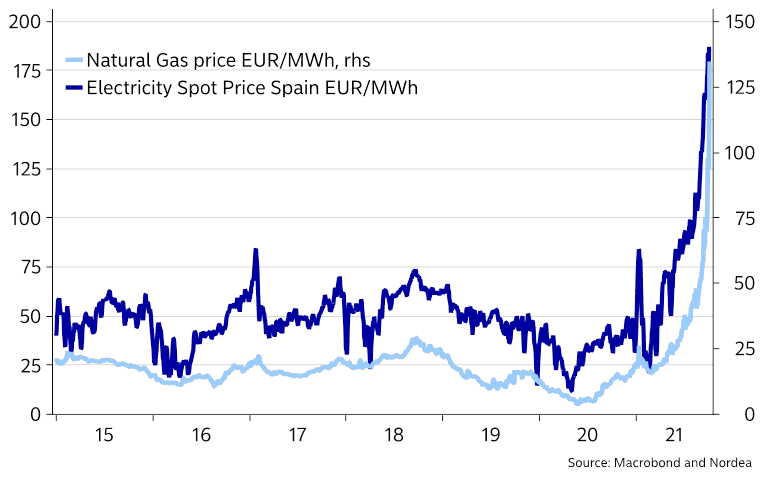 To understand why we are currently stuck in an energy crunch, we need to turn time at least ten years back to the launch of the German Energiewende in 2010, which was further accelerated by the Fukushima-disaster in 2011. Germany decided to end the nuclear capacity as soon as possible with a potential end-date during 2022. Capacity in nuclear production has since gone from >10% of German energy consumption to levels below 5% currently, with wind energy and natural gas as the replacements.

Chart 2. German energy consumption mix has moved away from nuclear towards wind and gas 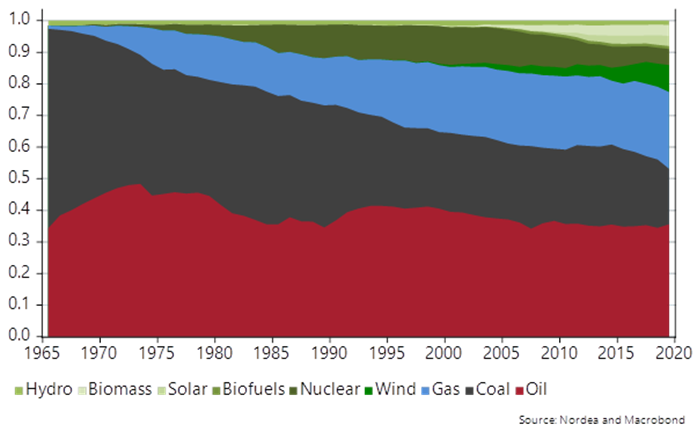 We have seen similar developments in countries such as Sweden and France, which has left the European electricity grid vulnerable should the wind not blow. Windfarms have produced 30-40% less electricity Y-T-D compared to a normal year, which paired with a structurally distressed supply chain has chased energy input prices up into the stratosphere with continued bizarre daily price increases in both natural gas, coal and oil at the moment.

Even if we see ourselves as a cross-asset strategy team, we don’t have a strong view on whether the wind will blow more or less than usual over winter, why we prefer to take a look at the energy situation should weather patterns behave as normal over the next 4-5 months. Inventories are scarily low ahead of the heating season.

How low are inventories? Germany is already under water

German inventories of natural gas are scarily low ahead of the winter. We have taken a deep look at Gazproms major storage sites in Germany (Katharina, Jemgum, Redhen and Etzel), and were almost shocked by the severity of the issue. Current inventories will run frighteningly close to zero by Mid-March 2022, if usual seasonal patterns unfold over winter.

The current 16900 MCM/D inventory in Gazproms German facilities is barely enough to survive the winter, as the inventories usually drops by between 17500-20000 MCM/D between late October and mid-March. This is too much of a knife-edge situation to be truly comfortable with. Remember that natural gas make up around 25% of the total energy consumption in Europe still. We are counting on you Vladimir! 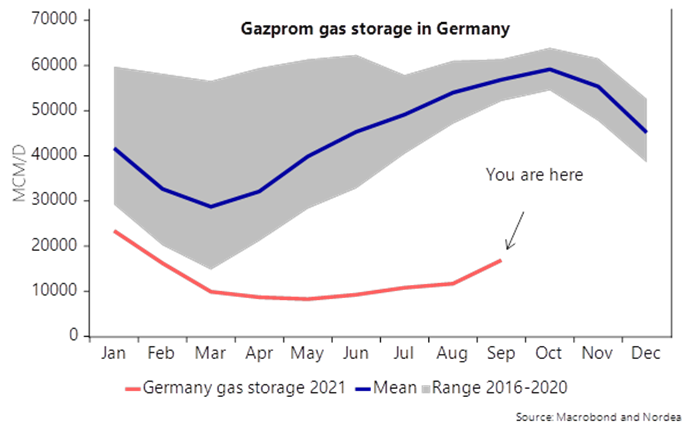 The situation is about as bad in China, if we just replace natural gas with coal in the charts, which could prove to be even more problematic as coal makes up around 60% of the energy consumption in China. Per anecdotal evidence China has now re-allowed Australian coal shipments to reach Chinese land-territory despite the ongoing geopolitical dispute between the two countries.

This development arrives on top of an already struggling Chinese real estate sector and a weak credit impulse – a potential triple whammy for Xi Jinping to deal with?

Oil stocks remain more resilient not least as inventory levels were extremely elevated during 2020 (remember that we had negative oil prices in Q2-2020 – it already feels like an age ago) but also as oil supply is probably more flexible than natural gas and coal supply. OECD oil stocks remain below averages, but not in a dramatic way. US oil inventories are even above usual mean levels still, which makes the situation less uncomfortable for the Yankees. 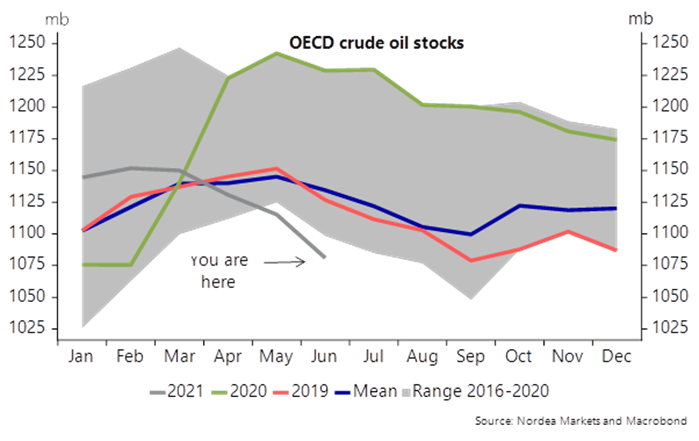 Which regions will suffer the most? The US is in a better spot than Europe and China

How big of an effect should we expect on global 2022 growth prospects from already observed price increases in energy? We constructed an energy input index for both the Euro area and the US. If we allow the regression on GDP to run only since the shale-boom, the model is roughly undecided on whether a higher energy price basket is good or bad news for the US economy, while it is clearly negative for the Euro area no matter the calculation horizon.

The bottom-line is that the Euro area is likely to be the most sensitive and we should expect at least 1.5-2%-points to be shaved off 2022 growth prospects (on a stand-alone basis) within the G3+ countries (Japan, Euro area and US) just due to the recent price moves in energy.

Chart 6. US and Euro area GDP forecasted by energy prices since 2000. The Euro area is clearly the most sensitive today 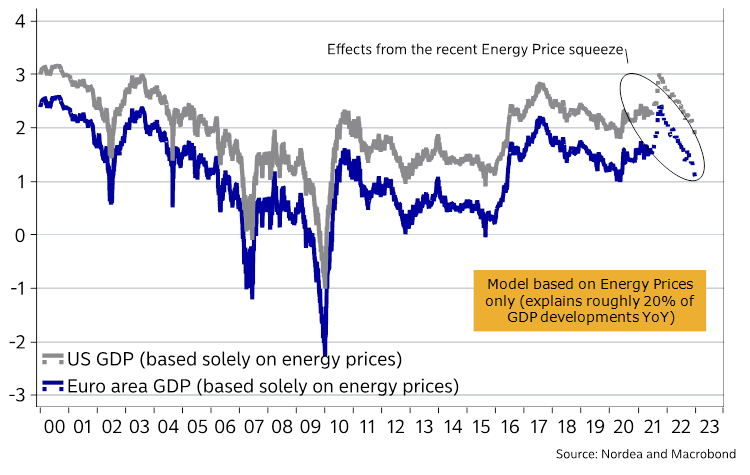 We have constructed an energy consumption price index for China, Europe and the US , which also reveals how the US is clearly less hit by the current energy squeeze compared to China and the Euro area. This is both driven by different compositions in energy consumption, self-sufficiency and geographical price differences. The (Russian) natural gas and coal dependency of Europe and China respectively puts them in a worse spot than the US.

Chart 7. The price development in the energy consumption basket of China, US and EU since Nov-2020 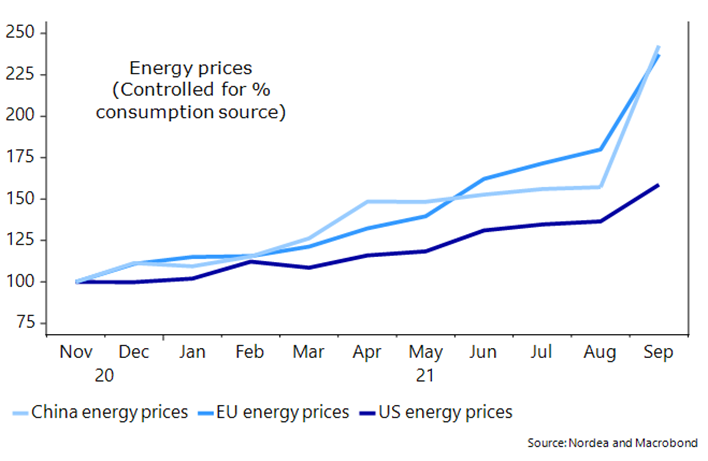 This also serves as a friendly reminder on why it makes sense to be long the USD versus CNY and EUR into year-end and why the Fed should be less scared of the energy crunch turning into an immediate negative growth story than the ECB and the PBoC should.

For the same reasons, it probably makes sense to frontload expectations of higher inflation and bond yields EVEN more than what we have already seen. What it means to 2022/2023 growth prospects (and hence medium-term inflation) is another debate. Whether Europe is about to enter an energy recession is now solely in the hands of the Tsar, which feels reminiscent of the power possessed by the Muftis in the 1970s. Let’s hope that the wind starts blowing!

US gas prices have pulled back sharply as

The ferrous complex was weak again on 18 October,

Numera with the note. I agree but am more bearish

A crucial driver of the energy crunch underway