The Reserve Bank of Australia (RBA) has released its June Bulletin, which includes an interesting report on the unprecedented stimulus undertaken by the world’s economies.

The first chart below shows the ramp-up in debt across advanced and emerging economies, which was driven higher by pandemic stimulus:

These direct measures, including those that are expected to persist into early 2022, have ranged from 5 to 24 per cent of 2019 GDP in advanced economies. Authorities in emerging market economies have provided smaller, yet still significant, direct fiscal support which has been equivalent to between 1 and 9 per cent of GDP (IMF 2021). For many economies, this has contributed to the largest single-year increase in the government debt-to-GDP ratio during peacetime…

The next chart shows the cumulative pandemic fiscal response across nations: Interestingly, “the direct fiscal response in the acute phase has mainly consisted of direct transfers to households and businesses, wage subsidies and tax deferrals”:

Wage subsidy schemes were deployed in almost all advanced economies to preserve pre-pandemic employment relationships and to provide replacement income to workers in affected businesses. The use of wage subsidies was motivated by a range of considerations: expectations that the pandemic disruptions would be short lived; the limited need for structural adjustment given the nature of the shock; and the perceived success of Germany’s wage subsidy scheme during the Global Financial Crisis…

The take-up of wage subsidies has been substantial. Across advanced economies, the use of the subsidies peaked at between 15 to 60 per cent of the labour force. 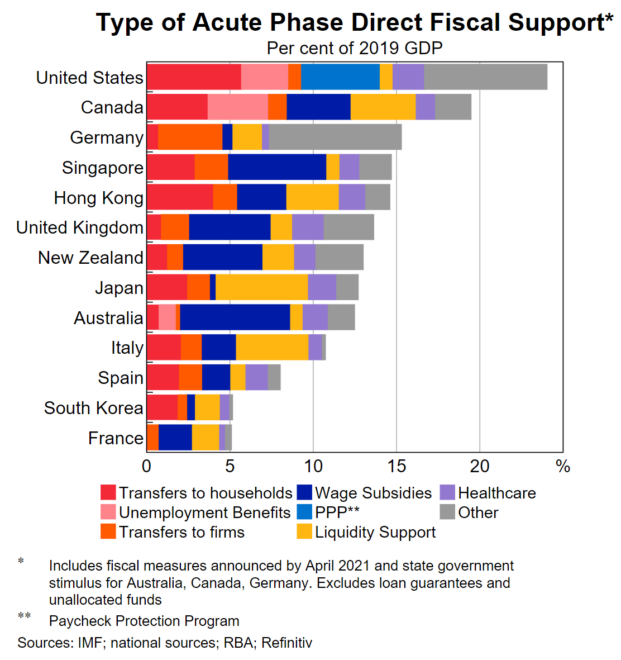 Because of this fiscal stimulus, “private incomes in advanced economies held up well during the pandemic despite the sharp drop in economic activity and hours worked”:

Household income support schemes helped to cushion the fall in household consumption. By providing households with more income certainty, they supported households in maintaining a higher level of consumption than otherwise; restrictions on services consumption meant that this boost to consumption was most evident in spending on goods. These schemes also contributed to a significant increase in household savings during 2020 and early 2021. The RBA also notes that “fiscal policy in advanced economies is expected to remain accommodative over the next few years as the support during the acute phase evolves into fiscal support for the recovery phase”:

The announced recovery phase measures should help avoid a repeat of the post-Global Financial Crisis experience in some advanced economies, where fiscal austerity was adopted before the economic recovery was entrenched. The premature winding back of fiscal support, before private demand was able to sustain the recovery, created unnecessary headwinds for many economies… Nevertheless, there will inevitably be some ‘fiscal drag’ on the economy, since the amount of stimulus will be falling:

Fiscal support during the acute phase of the pandemic has been so large that, even with the transition to the sizeable recovery phase support, there will be a tightening of fiscal settings in 2022. In advanced economies, cyclically adjusted fiscal deficits, which represent the deficit after accounting for the role of automatic stabilisers, are expected to decline from 2022; this will result in what is known as ‘fiscal drag’… The most interesting takeaway from this report is the sheer size of the global fiscal response to the pandemic. As big as Australia’s response was, it was nowhere near the biggest.