Melbourne property values were hardest hit by the COVID-19 downturn.

According to CoreLogic’s daily dwelling values index, Melbourne property values declined 5.9% between mid-March and 18 October 2020, but have since rebounded strongly, gaining 6.7% since then (see next chart). This comes after Melbourne dwelling values have risen 2.2% so far over March 2021, which is already the strongest monthly growth since October and November 2019, as well as 2009 (each 2.3%). Given there are still three days left in the month, these monthly peaks are certain to be broken at March’s end.

The momentum is obviously set to continue given the strong rebound in Melbourne’s auction clearance rates: 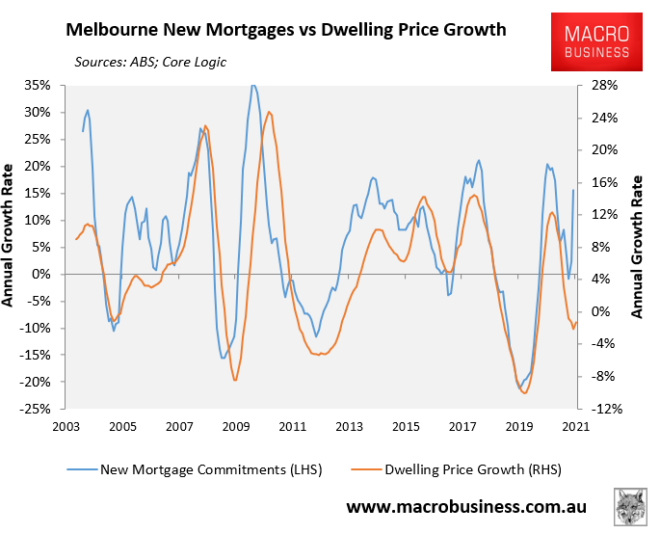 The rebound in Melbourne mortgage demand is pointing to strong price growth.

Both indicators – auction clearance rates and new mortgage demand – have historically been excellent leading indicators for price growth, as shown clearly in the charts above.

Therefore, the immediate outlook is for Melbourne dwelling values to experience ongoing strong price growth over the foreseeable future.

We will know that prices are likely to slow once these two indicators start to weaken.