The commodity boom continues to rain riches down on Australia with Australia’s trade surplus soaring to a new record high $10.1 billion after increasing by $3.0 billion in January, according to the Australian Bureau of Statistics.

The increase in Australia’s trade surplus was driven by a strong lift in exports, which rose $2.3 billion in January to $39.8 billion.

The trade surplus was also assisted by a $700 million fall in imports to $29.7 billion. 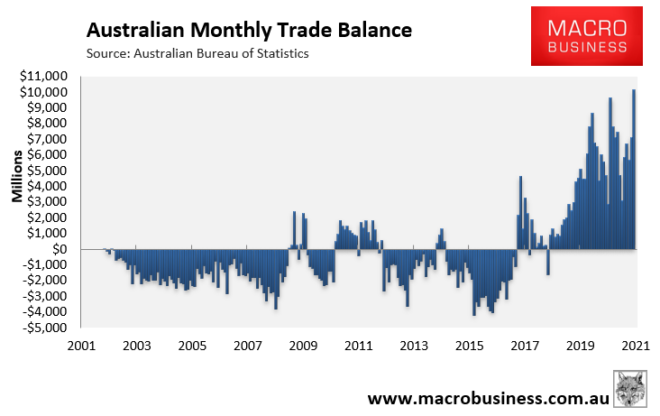 As expected, commodity exports are roaring on the back of iron ore, more than offsetting collapsing services exports caused by the closure of Australia’s international border, which has prevented international tourists and students from arriving: The iron ore boom has more than offset the collapse in services exports caused by the closure of Australia’s international border.

China’s boycott of Australian exports is clearly having minimal impact on Australia’s trade balance, which is healthier than ever.

Some very important articles today point to the