Data released yesterday by the Australian Bureau of Statistics (ABS) shows that the nation’s total household wealth increased by $501 billion in the December quarter, reaching a record high of $12 trillion. The estimated wealth per capital has in turn risen to a new high of $467,709. 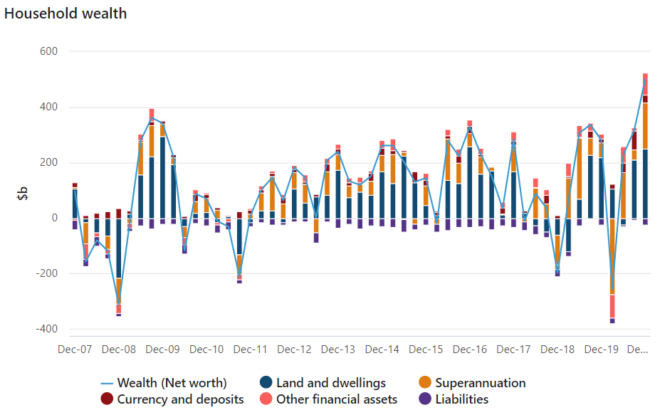 Australian household wealth surged in Q4 2020 on the back strong rises in property and share values.

The surge in household wealth has been driven by factors such as recent strong growth in dwelling prices and the share market’s rebound in the wake of the COVID-19 pandemic. Strong property price growth was the biggest contributor to the rise in household wealth.

However, while Australia’s housing wealth soared, the ratio of housing-debt-to-income continued to fall, recording a 2.5% decline through 2020, which is the biggest decrease since 1990: I predicted this outcome earlier this month. While households are taking-out new mortgage commitments at a record pace. Households are also furiously repaying existing mortgages.

Accordingly, the outstanding stock of mortgage debt (mortgage credit growth) is barely growing and actually shrinking as a ratio of household incomes and gross domestic product.

This helps to explain why Australia’s financial regulators are not too concerned about the property boom, since it does not yet point to financial instability.