On the one hand, Aussies are taking advantage of the lowest borrowing rates on record to pile into the housing market, with new mortgage issuance running at all-time high levels in January, according to the Australian Bureau of Statistics (ABS): New mortgage commitments are running at a record high, driven by owner-occupiers.

At the same time, growth in the stock of mortgages outstanding was running just above record lows in January 2021, suggesting Australians with existing mortgages are also taking advantage of low interest rates to repay debt at a record pace: The upshot is that while Australians are undoubtedly taking-out mortgages at a record pace, the value of these new loans is being mostly offset by existing mortgage holders repaying their debts at a similarly frenzied pace. Accordingly, outstanding Australian mortgage debt is barely increasing.

As shown in the next chart, new personal finance commitments are running at their lowest level on record, according to the ABS, tracking at roughly half the level of the late-2010 peak: The Reserve Bank of Australia’s (RBA) personal finance growth data – which captures new loan commitments and repayments – also shows that the stock of personal loan commitments fell by 12.4% in the year to January 2021 – a decline that dwarfs the troughs experienced during the early-1990s recession (-6.0%) and Global Financial Crisis (-7.8%): 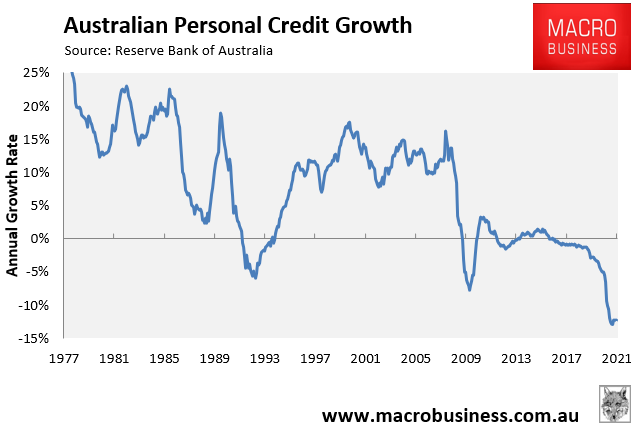 The key takeaway is that record low mortgage rates and the property boom do not necessarily mean that Australian household debt will rise.

If the flood of new mortgages is offset by repayments and ongoing declines in personal debts, then the stock of outstanding household debt could remain stable or even fall relative to incomes or GDP.

This might help to explain why the RBA is currently sanguine on the property boom as it doesn’t yet point to financial instability.

SQM Research are out with their nation-wide

The ABS has released the latest quarterly capital

Via AIG: Where goes property goes

This weekend marked the second biggest weekend of