The digital games and interactive media sector is probably much larger than you think and still growing. To put it into perspective, one of the highest rating movies ever, Avengers: Endgame, grossed US$858m during its opening weekend. Grand Theft Auto V’s release, earned US$1b in just over three days.

What is driving the growth of gaming?

There is a dearth of investment options for Australian investors in this space. If we exclude microcaps (under $50M capitalisation), the only real candidate is Aristocrat (ASX:ALL).

Aristocrat provides entertainment from casino-themed games such as Vegas Penny Slots or adventure games such as RAID: Shadow Legends. These are free to play but make money through in-app purchases. This shift to digital games now generates around 40% of its revenue. Recent comments from Aristocrat indicate revenues are up 20% due to COVID restrictions.

What is a gambling company doing developing games? Interesting that you should ask.

As I mentioned, a key driver behind the explosion in gaming revenue has been through freemium games, those that are free to play. Some examples of how these work:

The mechanics of getting paid as a game developer in this area is not dissimilar to the mechanics of getting paid as a poker machine developer. The longer you can get each player to play, the more money you are likely to get. Additionally, the majority of your customers earn you almost nothing, and a much smaller number deliver you most of your revenues. And just as importantly, the basis of gameplay is psychology. How to keep the player in the goldilocks zone: not so easy that they get bored, not so hard that they get frustrated. And how to space out the dopamine shots through rewards to keep the gamers gaming.

There is (disturbingly?) a lot closer links than you might think between gambling and gaming.

How else can you access gaming stocks in Australia? 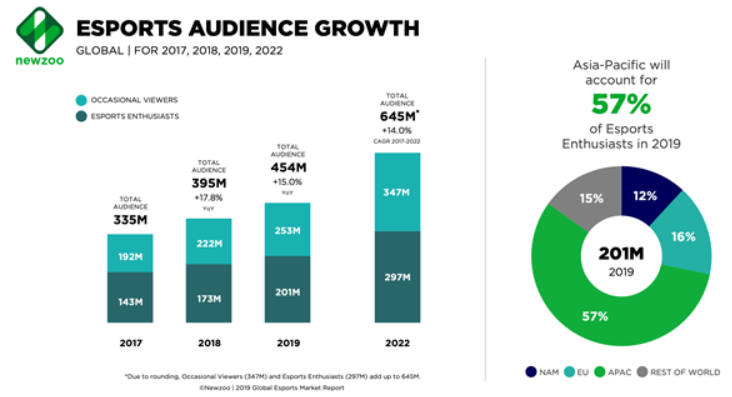 At the microcap end of the ASX market, several companies offer exposure to the gaming landscape. However, most of these are at a very early stage and are capital hungry. They should be regarded as options/ venture capital stage opportunities, not dissimilar to listed biotechs, where the risk to capital is high. i.e. you are more exposed to the success or failure of an individual game than you are to the growth of the entire industry. We only invest in large caps, so I haven’t looked at these companies in any detail:

What about international gaming companies?

For a more pure-play exposure to this growth, investors need to invest in US-listed video game companies like Activision Blizzard, Take-Two Interactive, and EA.

For a more diversified exposure, you can get access through Sony, Google, Apple and Microsoft. All four of these companies have significant exposure to the growth of gaming.

For a more targeted Asian focus investors could target some of the big Chinese stocks like Tencent Holdings. But buyer beware. There is political risk in these stocks, as the situation currently unfolding with TikTok highlights.

With global COVID restrictions, all of these companies have seen significant share price appreciation since the March lows.

The pure-play stocks generally rate well on our quality or growth criteria but look expensive to us on our value criteria. So it becomes a question of how much do you pay for growth?

What does Nucleus own?

We do own the diversified names such as Sony, Google, Apple and Microsoft – although we have been lightening our exposure recently.

In Australia, we have exposure to Aristocrat, but internationally the pure-play gaming stocks look too expensive for my tastes. We want to buy them but can’t justify the current prices. In a market pullback, these stocks are high on our shopping list.

Make no mistake, there is a generational shift underway. The average age of an eSports viewer is 23, the average soccer fan is 42. eSports viewers tend to be richer and better educated than non-viewers. It is an interesting market segment.

Asian stock markets have all broadly sold off in

MB Fund Podcast: The Bull Case for Investment Markets in 2021

Stocks to buy as yields rise

The bond back-up continued in the US overnight

Wall Street dropped for the third day in a row