By Martin North, cross-posted from the Digital Finance Analytics Blog:

The latest Financial Stability report released by the Bank of England provides insights into the UK mortgage market, and some of the concerns the regulators are addressing. Of note is the information on “Buy-to-Let” loans, or Investment Mortgage Loans. Most striking is the strong concerns expressed about the rise to 17% of all loans being for this purpose. In Australia, by comparison, 35% of housing loans are for investment purposes. We also look at household debt ratios and countercyclical buffers.

The PRA conducted a review of underwriting standards in the buy-to-let mortgage market between November 2015 and March 2016. It reviewed the lending plans of the top 31 lenders in the industry, who account for over 90% of total buy-to-let lending. A number of lenders planned to increase their gross buy-to-let lending significantly, with overall planned lending in the region of £50 billion.

Given competition in the sector, this strong growth profile raises the risk that firms could relax their underwriting standards in order to achieve their plans. The review further highlighted that some lenders were already applying underwriting standards that were somewhat weaker than those prevailing in the market as a whole.

At its March meeting, the FPC welcomed and supported the draft Supervisory Statement. The Supervisory Statement reflects microprudential objectives, aiming to reduce the risk that buy-to-let lenders make losses that can threaten their safety and soundness. From a macroprudential perspective, policies that prevent a slippage in buy-to-let underwriting standards should also reduce the threat of buy-to-let lending amplifying wider housing market risks. The FPC discussed that, although the 200 basis points increase in buy-to-let mortgage rates was lower than the interest rate stress applied to owner-occupied lending under the FPC’s June 2014 Recommendation, lenders tended to assess affordability for buy-to-let mortgages using interest cover ratios of at least 125%. In addition, loan-to-value ratios at origination in excess of 75% were less common in buy-to-let mortgages than in owner-occupied mortgages. Buy-to-let loans therefore typically started with a larger equity cushion for lenders, which reduced the associated credit risk in the first few years of the loan given that these loans were typically non-amortising. The FPC considered that no action beyond this was warranted for macroprudential purposes at that time. It will continue to monitor developments and potential threats to financial stability from the buy-to-let mortgage market closely, and stands ready to take action.

Another piece of data in the report is the household indebtedness. Worth comparing this with the RBA chart we highlighted yesterday, where the ratio in Australia is north of 175%. 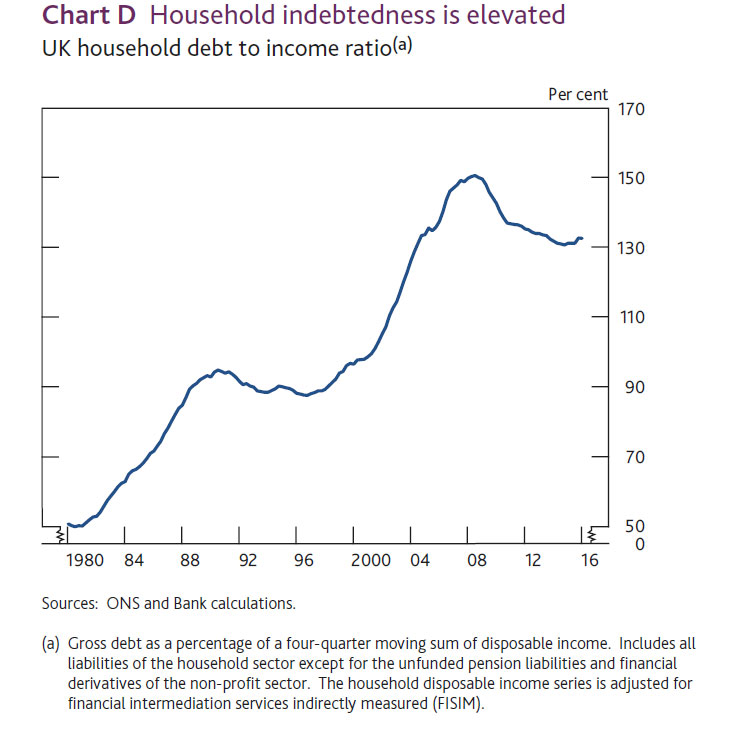 More broadly, The Stability Report highlighted the risks to the UK economy, especially around Brexit. The webcast is worth listening to.

Of note is that fact that the regulators reduced the UK countercyclical capital buffer rate from 0.5% to 0% of banks’ UK exposures
with immediate effect, reflecting heightened risk and the wish to encourage banks to lend.  Australia already has a zero percent buffer.

The FPC is reducing the UK countercyclical capital buffer rate from 0.5% to 0% of banks’ UK exposures with immediate effect. Absent any material change in the outlook, and given the need to give banks the clarity necessary to facilitate their capital planning, the FPC expects to maintain a 0% UK countercyclical capital buffer rate until at least June 2017. This action reinforces the FPC’s view that all elements of the substantial capital and liquidity buffers that have been built up by banks are able to be drawn on, as necessary, to allow them to cushion shocks and maintain the provision of financial services to the real economy, including the supply of credit and support for market functioning.

It will reduce regulatory capital buffers by £5.7 billion. For a banking sector that, in aggregate, targets a leverage ratio of 4%, this raises their capacity for lending to UK households and businesses by up to £150 billion.

In March, the FPC had begun to supplement regulatory capital buffers with the UK countercyclical capital buffer. This reflected its assessment that the risks the system could face were growing and additional capital was needed that could be released quickly in the event of an adverse shock.

At that time, the FPC judged that risks associated with domestic credit were no longer subdued, as they had been in the period following the financial crisis, and global risks were heightened. The Committee raised the UK countercyclical capital buffer rate to 0.5% and signalled its expectation that it would increase it further, to 1%, if the risk level remained unchanged. As set out in this Report, a number of economic and financial risks are materialising. The FPC strongly expects that banks will continue to support the real economy, by drawing on buffers as necessary.

The FPC has therefore accompanied its decision to reduce the UK countercyclical capital buffer rate with a Recommendation to the PRA that it bring forward this planned reduction in PRA supervisory capital buffers.

Recommendation: The FPC recommends to the PRA that, where existing PRA supervisory buffers of PRA-regulated firms reflect risks that would be captured by a UK countercyclical capital buffer rate, it reduce those buffers, as far as possible and as soon as practicable, by an amount of capital which is equivalent to the effect of a UK countercyclical capital buffer rate of 0.5%.

The PRA Board has agreed to implement this Recommendation. This means that three quarters of banks, accounting for 90% of the stock of UK economy lending, will, with immediate effect, have greater flexibility to maintain their supply of credit to the real economy. Other banks will no longer see their regulatory capital buffers increase over the next nine months, increasing their capacity to lend to UK households and businesses too.

Consistent with this, the FPC supports the expectation of the PRA Board that firms do not increase dividends and other distributions as a result of this action.