Let me outline the impact of plummeting iron ore prices. For every $1 fall in the price of iron ore the Australian economy loses $800 million in foreign income and the Federal Budget takes a $300 million hit to company tax — that is the public’s money. In other words, your money.

…Tens of thousands of direct jobs have been lost and mines have shut down in South Australia, the Northern Territory and Western Australia, and many more lost indirectly. All those who relied on a healthy iron ore industry have felt the threat or succumbed to it.

However, what is really galling is that the price has fallen off a cliff not just because of international forces beyond our control but because of the words and actions of companies, particularly London-based multinationals, who mine and export our iron ore.

…Australians own the iron ore. That’s why the companies which mine it have signed contracts with the State of WA undertaking to maximise its price when they sell it.

Are the two biggest multinationals, Rio Tinto and BHP Billiton, doing that? Or has their oversupply done nothing more than actually force the price down and threaten the economy of our country? And all for what?

…If you are angry about being gamed like this, the good news is you have power as owners of this resource to ensure miners maximise iron ore value and help repair the economy. It is called a social license to operate. And it is provided by you to the companies you trust to develop your natural resources.

Write, email or ring your local Parliamentary Member. Be clear in your views.

You really have to live through these rent-seeking episodes to understand just how deep is the contempt for the Australian people among our elite miners. This is concentrated Banana Republic clap trap, urging the people of an island commodity nation in their own name to act contrary to their own interests for the benefit of one man.

Vale does a good job of exposing Twiggy’s rhetoric today at the FT:

In an interview Luciano Siani, chief financial officer…said Vale would be likely to “push to the fullest” its production of the highest grade of iron ore, which commands a premium price from steelmakers. By contrast Vale would be more likely to “manage” its more “standard” iron ore supplies, he said.

“Maybe we will have several stories unfolding [in the iron ore market],” Mr Siani said. “We believe that the products will behave differently according to the segment.”

…Among Vale’s rivals, Australia’s Fortescue Metals Group is most reliant on lower-grade ore. Many smaller companies also depend more on lower grades.

“We are seeing . . . the early days of a segmentation in the market,” Mr Siani told the Financial Times. “We have a lot of oversupply of more standard ore . . .”

Which is why this happened: 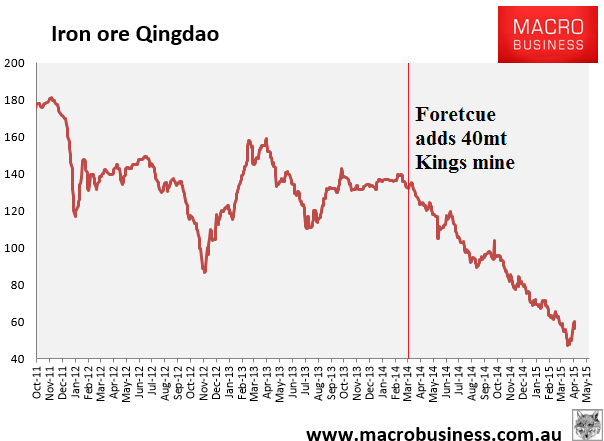 I can only repeat the following in the hope that some of my countryman see through Mr Forrest’s epic assault upon their good sense.

Owing to geographic concentration, the benefits of scale and capital intensity, iron ore extraction is a natural oligopoly business. What’s at stake here is not whether prices can be artificially propped up but who owns the cartel and whether that benefits Australian welfare. Let’s take a quick look at two scenarios to make the point.

The first scenario is the cartel structure favoured by Andrew Forrest and various pollies that seeks to protect and include iron ore juniors by pulling back major miner supply expansions. The second is also a cartel but one that results from swift junior rationalisation enabling the major miners to consolidate their pricing power.

In the junior cartel, Australian iron ore produces 837 million tonnes (mt) of iron ore from 2016 onwards. It does so at a slightly improved price for 2016 as oversupply is reduced in the short term by 43 mt as majors retrench.

However, as Sino, Roy Hill, Anglo and Vale continue their expansions and Chinese demand keeps falling, the glut builds from 2017 onwards and the price keeps falling.

In due course, smaller members of the junior cartel require enormous subsidy to stay afloat as they register huge losses year after year in a price environment stuck at $20 and below. It’s either that or the cartel must negotiate spectacularly implausible shared volume cuts across all Australian producers (at least those in the cartel).

Trade rules must be junked, Chinese relations destroyed and the WTO as well as ACCC told to piss off. To operate this would require a virtual nationalisation of all players as total transparency governs quotas, otherwise widespread cheating is inevitable, as in OPEC.

In the alternative model, the major cartel, Australian iron produces 880mt in 2016. It does so at an average $10 lower than the junior cartel in that year given the higher supply glut. However, as the 50mt of junior and 165mt of Fortescue production shuts down by 2017 the iron ore price at first stabilises and then slowly rebounds as some pricing power returns to the major producer’s cartel. Iron ore volumes are down to 715mt but the price is trading at $40 per tonne in a rough market balance.

Juxtaposing these two scenarios gives you the following total revenue chart for the sector (and nation):

Most importantly, in the junior cartel there are no profits for anyone as protected oversupply crushes all margins, including those of the majors. There is also a gigantic Budget drain for WA as it supports the juniors with huge subsidies that completely overwhelm royalties.

In the major cartel, unprofitable iron ore is driven out and solid profits return to the low cost producers as Roy Hill emerges as the marginal producer around $40. There is no budget drain and solid royalties, as well as a Federal tax take (if much lower than the past).

When you cut through all of the crap it’s really very simple, the juniors and Fortescue must die as soon as possible for the good of the nation. It is the only viable fix for the historic iron ore glut.

The ferrous complex was a bit of a mess on

I have been wondering why it has taken China so

The ferrous complex was roughly stable on October