The bad news continued overnight for long only investors as US stocks slipped following European bourses, with the worst losing streak in over a year. A below expectation release of US service sector activity hampered any attempts at a recovery, with the ISM down significantly on November’s level and factory orders falling again, four months in a row.

While the US is still in positive territory, but clearly decelerating, the same can’t be said in Europe where only Germany (surprise) registered any meaningful expansion and beat expectations, with France and Italy bumbling alongside the UK.

The FTSE lead the decline and although it recovered somewhat before the NY open, it still remains on target to hit its pre-Christmas and October correction low:

The DAX cash market ended flat while Eurostox fell overall 0.5% but moving into NY trading all the futures are down. The S&P500 fell nearly 1%, closing just above the psychologiclaly importnat 2000 points level, but fell further in post-close trading:

On the dailies, the S&P is heading towards terminal support at 1970 points, the former resistance level from mid last year and an important support level where the Christmas rally burst through. A fall below could be ominous and see this dip turn into a correction down to 1800 points.

This does not bode well for Australian stocks, coupled with falls across the commodity complex (save gold, interestingly enough) with the SPI futures hammered, sending the ASX200 down 1% on the open this morning.

The ASX200/SPI is slowly forming the right hand shoulder in a bearish head and shoulders pattern, unable to make new highs in any subsequent rebound. In the short term this means a revisit of the October low just above 5000 points, but in the medium to long term, could see 2015 shape up as the year of the bear with 4500-4900 points the next down target:

Commodities first before currencies with oil not able to catch a break and making fat tail moves on the downside. WTI was clobbered down to below $48USD a barrel while Brent was sent down to just over $50USD a barrel, or about 4% falls all round.

I don’t think a chart here is necessary do you? Well at least on the four hourlies the $52.50 level needs to be broken through, with a follow through to $59 before I would get excited (save an intra-week swing trade).

Gold is powering ahead having a nice breakout on the dailies but coming up to downtrend resistance around $1225USD per ounce: The volatility here is a little too high for a proper risk reward position in the short term, however longer term players could be slowly acquiring long positions here – particularly in weaker non USD currencies (e.g Euro, AUD)

US Dollar remains king as it rules over Euro, Pound and Aussie, but not Yen overnight. Euro brokedown through the 1.19 handle again forming a new low on the four hourlies, now down some 500 pips since the pre-Christmas breakdown on speculation the ECB will finally press the QE button: 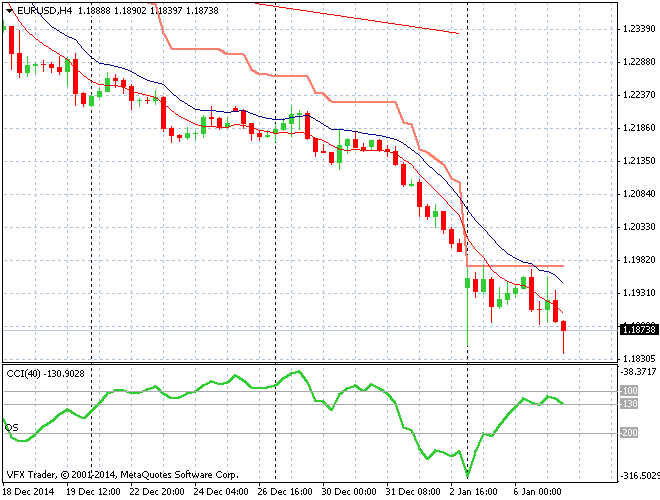 The upside breakout level is pretty clear there, but momentum is clearly to the downside. Cable (GBPUSD) moved to the same tune and is sitting just above 1.51 falling over 150 pips from the London open. Again, a similar breakdown since the New Year…

Aussie was caned after having the audacity to breakout and be bullish post the surprising trade balance figures yesterday. A beautiful swing short (and excellent reposition for long term short holders) has seen Aussie almost revisit start of week gap lows. Any further falls are predicated on a risk off move as there are no significant catalysts for Aussie today: The data calendar rolls on with significant releaess in Europe tonight with German unemployment and CPI the key. Remember, effectively the ECB doesn’t give two schiesens about the rest of the continent and is really only focused on if Germans have jobs and low inflation.

There’s the sway of retail/service PMIs as well and then ADP jobs and international trade from the US, with the minutes of the FOMC’s December monetary policy meeting closely watched earlier tomorrow morning AEDST.