Given the huge volatility that has characterised market action so far this year, it’s appropriate to examine if 2015 truly is the “year of the bear”.

First a recap of Bill Gross’ view from his latest investment letter, showing how we got here (emphasis added):

Even with the recognition of the Minsky Moment in 2008 and his commonsensical reflection that “stability ultimately leads to instability,” investors have continued to assume that monetary policy could contain the long-term business cycle and produce continuing prosperity for investors in a multitude of asset classes both domestically and externally in emerging markets.

The Alice in Wonderland fact of the matter is that at the zero bound for interest rates, expected Returns on Investment (ROI) and Returns on Equity (ROE) are capped at increasingly low levels. The private sector becomes less willing to take a chance with their owners’ money in a real economy that has a lack of aggregate demand as its dominant theme.

If real growth in most developed and highly levered economies cannot be normalized with monetary policy at the zero bound, then investors will ultimately seek alternative havens.

Increasingly, however, it is becoming obvious that as yields move closer and closer to zero, credit increasingly behaves like cash and loses its multiplicative power of monetary expansion.

Finance – instead of functioning as a building block of the real economy – breaks it down. Investment is discouraged rather than encouraged due to declining ROIs and ROEs. In turn, financial economy asset class structures such as money market funds, banking, insurance, pensions, and even household balance sheets malfunction as the historical returns necessary to justify future liabilities become impossible to attain.

Meanwhile Gerard Minack is sounding not like a bear, but a rationalist in an investment world covered in central-bank haze atop a mountain pile of unpayable debt. Here are some curated comments from his interview earlier this week at the AFR, my emphasis added again:

The biggest bubble out there is central bank credibility. If Draghi was a stock he’d be on a P/E of 200! Yellen’s on 100. When that bubble pops, all hell will break loose again, and there you really just want to be in cash.

My look forward this year is that with the Fed tightening even modestly you bring the curtain down on P/E expansion. It’s going to be a poor year for US equities because earnings growth is not that strong; but at least the US has earnings growth. Outside the US you don’t, which is a very problematic outlook for this year unless you want to say the world suddenly accelerates, which it may do for a quarter or two because of low oil prices, but beyond that it doesn’t look great.

Looking at US equities the median P/E multiple for US stocks is already at an all time high:

With share buybacks at record highs, ca. 90% of all profit is cycled back into shares, not investment, as forward earnings per share rollover, illustrating Bill Gross’ point about diminishing ROI: 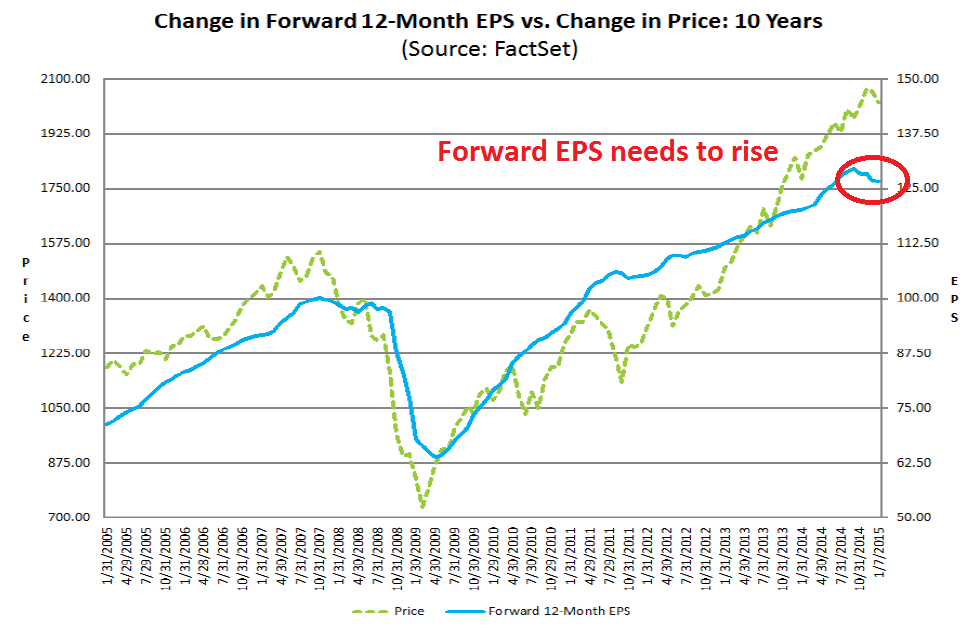 As much as emerging markets have their problems with lower oil prices and a very high USD, Gerack contends the problems for the global economy will come from the core, not the periphery as we all turn Japanese:

The rest of Asia is an uneven story. Ultimately still a slow-growth world. If the US is growing at 2.5 per cent, and it’s the world’s locomotive, then you know the train is not moving very fast.

The problem is that the French franc is too high against the deutschemark, and Mr Draghi can’t fix that. From the resulting economic stress you’re getting political blowback. There are whole landmines of elections coming up in the next 18 months, any one of which could throw up a result that could get the crisis back as front page news.

Now, we’ve shot a lot of bullets in the global financial crisis and the next downturn I think will reveal most other people are turning Japanese. Unfortunately the one policy that blindingly obviously works is fiscal policy, but it’s very unlikely to be doable in the next downturn; in the US due to congressional gridlock, and it will be disabled in Europe because they won’t have a centralised fiscal authority.

These warnings reflect those of Bill Gross and indeed those long time readers of Macrobusiness would be aware of. A mixture of ideological/political barriers against using fiscal policy, eschewing the failed austerity method is emboldening very unconventional and potentially dangerous monetary policy actions.

Finally on the domestic front, the news isn’t that much greater but Gerard is right to pick the current narrow interest rate difference as somewhat supporting the AUD and the “wobbling” of unemployment leading data to indicate stress ahead:

(the AUDUSD) will go to US75¢ or lower this year. We still offer something that’s in scarce supply: safe yields which are high by global standards. That slows the response of the currency to terms-of-trade weakness and narrowing interest rate differentials.

From here, iron ore will halve in US dollar terms, in my view. In the boom all the other commodities went up six- or seven-fold, while iron ore went up 15 times. So, sure, it’s halved already, but it has further to go.

We know this year that residential investment will contribute less to growth, we know car workers will start to get fired. We know mining capex starts to accelerate to the downside.

The one thing that looks half-good are leading indicators of employment. The ANZ and ABS jobs ads, and the components of the monthly purchasing managers index, look OK. But if they roll over we’ve got a problem, and already we’ve seen them wobble, which is partly due to politics.

Finally a technical look at a ratio of risk appetite that should have your risk management antennae twitching. I use a variation of this indicator for my own risk management (not just US but European and Australian structures) alongside a study of the CBOE VIX and it all portends to a bear market ahead.

From Humble Student of the Markets:

As confirmation of this investment theme, the chart below shows the SPX to US long Treasury bond price ratio as a measure of risk appetite. When the ratio (middle panel) is rising, stocks are outperforming bonds, indicating rising risk appetite; and when it is falling, the reverse is true. As the bottom panel of this chart shows, MACD already turned negative in late 2014. MACD is a momentum indicator and quite a reliable one. As bond yields reach ever lower levels (inverse is higher bond prices), Minack’s view of bonds as a “safety asset class” not an investment class is warranted:

The world’s financial markets are swimming in excessive leverage at record valuations, dependent upon continued monetary easing amid zero bound interest rates. The end of QE3 in the US has correlated exactly with the huge rise in volatility and all of Europe awaits the expected QE from the ECB next week to carry the speculative bag into 2015.
But what if the end game is already here? Bear markets begin by having a normal correction within a secular bull market, as we’re experiencing now. For it to accelerate only requires a political or instability crisis – an airpocket in Ray Dalio’s language – to emerge and let the bear roar. On this theme, subscribers only will receive a Special Report analysing the investment and trading “Opportunities in 2015” next week.