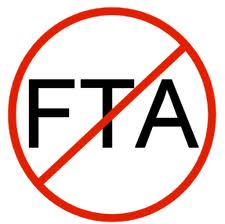 From Paul Krugman comes the assessment that Andrew Robb should have made many months ago:

It’s less well known that the administration’s international economic agenda is also stalled, for very different reasons. In particular, the centerpiece of that agenda — the proposed Trans-Pacific Partnership, or T.P.P. — doesn’t seem to be making much progress, thanks to a combination of negotiating difficulties abroad and bipartisan skepticism at home.

And you know what? That’s O.K. It’s far from clear that the T.P.P. is a good idea. It’s even less clear that it’s something on which President Obama should be spending political capital. I am in general a free trader, but I’ll be undismayed and even a bit relieved if the T.P.P. just fades away.

…What the T.P.P. would do, however, is increase the ability of certain corporations to assert control over intellectual property. Again, think drug patents and movie rights.

Is this a good thing from a global point of view? Doubtful. The kind of property rights we’re talking about here can alternatively be described as legal monopolies. True, temporary monopolies are, in fact, how we reward new ideas; but arguing that we need even more monopolization is very dubious — and has nothing at all to do with classical arguments for free trade.

Now, the corporations benefiting from enhanced control over intellectual property would often be American. But this doesn’t mean that the T.P.P. is in our national interest. What’s good for Big Pharma is by no means always good for America.

In short, there isn’t a compelling case for this deal, from either a global or a national point of view. Nor does there seem to be anything like a political consensus in favor, abroad or at home.

…So what I wonder is why the president is pushing the T.P.P. at all. The economic case is weak, at best, and his own party doesn’t like it. Why waste time and political capital on this project?

My guess is that we’re looking at a combination of Beltway conventional wisdom — Very Serious People always support entitlement cuts and trade deals — and officials caught in a 1990s time warp, still living in the days when New Democrats tried to prove that they weren’t old-style liberals by going all in for globalization. Whatever the motivations, however, the push for T.P.P. seems almost weirdly out of touch with both economic and political reality.

So don’t cry for T.P.P. If the big trade deal comes to nothing, as seems likely, it will be, well, no big deal.

Australia has been blindly supporting the TPP supposedly to chase sugar exports as well as bizarrely supporting China’s exclusion from it. Max Suich had a much better explanation last week for why:

…we are provoked by these uncertainties about American commitment:to get ostentatiously closer to the US, so as to be seen as an ally joining “ a firm stand” against China so as to encourage the US to stay engaged in north Asia and to that end to volunteer assistance there in “treaty networking” and ultimately military assets. And to look for encouragement from like minds in Washington -among others, among the veterans of the Bush administration.

The TPP is not a trade document at all, it’s strategic one, probably damaging to our Chinese trade in the long run, not to mention the Budget via higher PBS costs.