Gold last night was the vanguard in a wide retreat of undollar risk assets, falling over 5% to settle at $1574USD per ounce before the Asian spot session opens shortly this morning.

As I prefaced in my Trading Day posts this week, on Monday it had appeared the precious metal had formed a reversal head and shoulders pattern, by Tuesday the pattern had been tentatively confirmed by a break in the “neckline”, and I warned before short sellers got too excited:

There is substantial support around $1600 an ounce where a brigade of Zero Hedge buyers stands ready to bid up their bunker inventories of the shiny metal. A break below $1600 however would be extremely bearish and probably alongside a general correction or crash in commodity prices.

By yesterday I became concerned enough to “zoom out” to the weekly chart to filter the noise of daily trading and observed that the long term trend in gold was still intact. However, this has of course changed dramatically overnight, where alongside gold, copper fell 4%, silver fell over 7% and the US Dollar Index rose to almost one year high to 81.2 against all other “undollar” currencies: And for the commodity complex, this breakout is even clearer as shown by the CRB Commodities weekly chart below, where previous support has been breached and a new target around the pre-QE2 level of 250 (around 15-20% below): For non-traders, it must be repeated that moves in so-called “risk” or “undollar” assets are defined by the rise and fall in the US dollar. This is a matter of mathematics and faith – when the market contends that everything is good, money leaves short term US dollar assets and flows into risk assets (including shares, Australian dollar and commodities), which is self-sustaining as a lower US dollar helps the world’s biggest economy.

However, when the market is fearful, they seek repratiation to perceived safety and thus risk markets are sold off and the US Dollar Index rises, and the “worthless” US dollar appreciates. This can be clearly seen in this long term chart of the US Dollar Index: The chart above can be encapsulated in one quote from Cullen Roche, author of Pragmatic Capitalism, and reminds me of the Q&A session by journalists (coached by fund management prepared questions) of the recent ECB meeting where no QE was forthcoming:

It’s like clockwork. Every time the govt gets out of the way the markets throw a temper tantrum.

Which is why the meme surrounding gold is so interesting. In a recent discussion started on Twitter, Delusional Economics expanded:

Gold is the ‘people’s fiat‘, that is it has no real value however humans intrinsically trust it to have value. So when central banks are devaluing ‘State fiat‘ via “printing”, the people will run to gold as they trust it to store value.

It is actually very odd behavior when you think about it because gold is about as useful as paper to the average Joe. However the fact that it is completely immutable and, thus far, inimitable, seems to have some ‘magic’ effect.

So beyond the magic, what does the technical analysis witchcraft tell us? 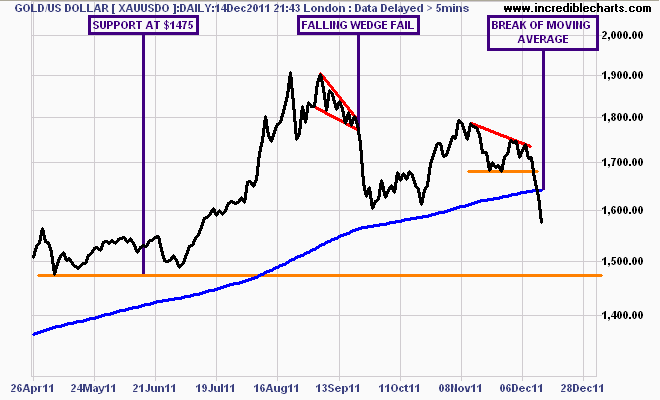 As gold has broken its long term moving average (followed by the speculative crowd) and support at $1600, the next target is just below $1500 at approx. $1475USD an ounce, the low of the accumulation point from earlier this year. The weekly chart is interesting (I’ve included the high/low ranges via candlesticks), because the long term trend since the GFC low has been broken intra-week several times, but buying support has stepped in – on speculation that Central Banks would start up or expand QE programs or ZIRP again. If we zoom out to the monthly chart, the secular bull market since 2000 is clear, with a clearly intact trend channel, even during the near 30% correction in gold during the GFC. Note that gold has accelerated since the start of 2011 and remains in the upper half of this channel, as it did pre-GFC, so it is setting itself up for a significant correction, probably to the lower edge of the channel around $1300-1400 USD an ounce.

Of course, as Delusion Economics has succintly pointed out, if there is no more ‘State Fiat’ forthcoming, and debt deleveraging accelerates into further writeoffs and contracting supply, the demand for the ‘People’s Fiat” will inevitably fall.

Disclosure: I’m short gold and a lot of other “undollar” assets, via short term and medium term positions, including some hedges. I’m also long the US dollar, including in super where I hedge my undollar positions via an exchanged traded fund, using the Betashare ETF (Code:USD) Please read the MacroBusiness Disclaimer.