The S&P/ASX 200 opened higher this morning and built on those gains up over 0.5% before falling sharply just after midday – possibly due to news about the fall in Chinese industrial activity. The market is now 22 points off its intraday high, at 4554 points, only 5 points up on yesterday.

It’s mainly green across the board, the biggest gains in the Small Ords and energy sectors. The banks are all up approx. 0.5% – NAB the standout, up 1%

The big winners amongst ASX200 stocks are among the Small Ords resources, with Gindalbie Metals (GBG) up 8.3%, Sundance (SDL) up 6%, and Paladin (PDN) up 5.4%
The biggest losers include Platinum Australia (PLA) down again, this time 4%, and Aristocrat Leisure (ALL) down 2.5%.

Daily Chart
The daily chart clearly shows a rebound from the the 4450 points low – a double bottom pattern has formed. This will not equate into a bullish uptrend until the previous high of 4650 points is taken out, a hard task given the strong resistance at circa 4600 points. A bull market rally will not get underway until we are clear of the 4700 point level. As House and Holes mentioned this morning, the debt crisis in Greece appears to have some resolution and is likely to result in a rebound risk rally, but probably only lasting until the US “government” (as my namesake once said: “Men are so simple and yield so readily to the desires of the moment that he who will trick will always find another who will suffer to be tricked.”) sorts out its own debt crisis.

Let’s look at that thesis a bit closer.

First, the UK FTSE 100 Index show below has been tracking sideways since the start of the year, forming a triple top pattern, but with higher lows on any corrections. The extended higher trendline will be an area of resistance for any new rally (approx 6100 points, or 4-5% away). UK FTSE100 is in a sideways market since start of year

Next, the German DAX Index over the last year has had a sterling rise, punctuated by a very volatile response to the Japanese earthquake in March. A bullish wedge pattern has formed since then, with overhead resistance at approx. 7500 points and strong support at 7100 points (also the 260 day moving average). The road to meet the previous high is rocky – most of the banks affected by the proposed Greek Bailout are German, so this will affect the DAX in the short term. German DAX30 is in a strong uptrend, for now

The French CAC-40 Index looks to have already priced in the movement of its own banks (again exposed similarly to their German cousins). Note how the recent price action has lower highs (forming a bearish triple top) and lower lows, culminating in the break in the trendline from the May 2010 lows (Greek Crisis 1.0) Any subsequent rally is unlikely to breach the 4000 mark, which has strong resistance. French CAC-40 Index has priced in some bank suffering

What about the Greeks? Well, they’re already at record lows (eclipsing the real low in early 2003) and in a clear bear market. 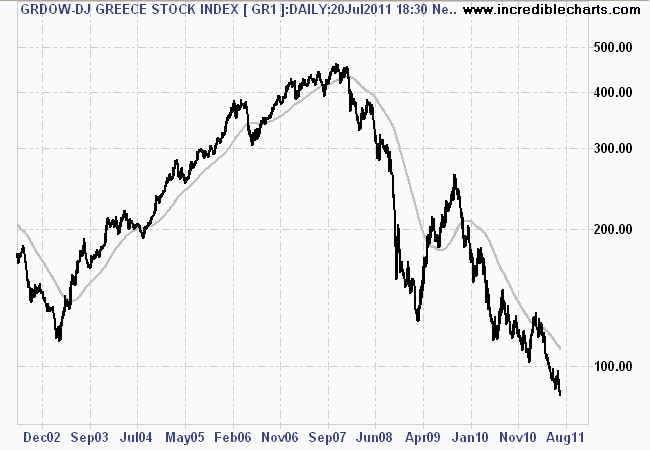 A rebound rally is possible as occured in Crisis 1.0 where a similarly weak bottom occurred thence a bailout package announced, rallying over 20% before reality set in again. In conclusion – the technicals do support a possible, short term rally, between 4 and 10% in the Euro stock indices as the news of (yet) another bailout sinks in across Bloomberg terminals across the world. This will likely set the quants on fire trading the volatility before reality comes home to roost.