The S&P/ASX 200 slumped on the open, digesting the very poor US unemployment numbers on Friday, and the carbon pricing announcement yesterday. The market is now 1.3% or 60 points lower just after midday.

It’s red across the board. Obviously, the miners and resource/energy stocks are leading the charge, with the four major banks tripping up over some weak lending numbers. CBA and NAB are down 1.3%, whilst ANZ and WBC are down further, 1.5% and 2.3% respectively.

Its a quiet up-day for other ASX200 stocks, with only EWC powering ahead, up 2%, but outside the too-followed index (there are better companies outside the top 200 folks!) the renewable energy companies are on a tear. Some of the “hotties” I mentioned this morning: Dyesol (DYE) is up 8%, Petratherm (PTR) is up 15% and Geodynamics (GDY) is up a staggering 28%

The biggest losers include most of the resource sector, suffering losses between 3-6%. Not a good day to be long resources or non-renewable energy (but probably a good day for Coalition pollers).

Daily Chart
The daily chart shows today’s reversal has seriously arrested the previous week rally – now back to resistance at or about 4600 points. It’s basically a crap game in the short run, but probably a slow sluggish sideways move in the medium to long term. 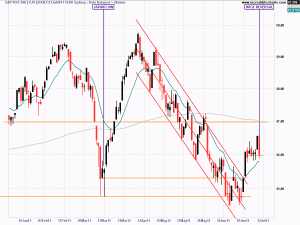 My long term system is still displaying “don’t go long here” signals until we surpass the 4700 point level, which the market wants to gravitate towards but has little chance of doing so now with the carbon price cost sentiment (even if the actual cost to Australian companies is probably less than 1 cent rise in the AUD vs the USD).

As I’ve said countless times before, fundamentals don’t drive markets – its the perception of the fundamentals and the sentiment that creates that moves prices.