While browsing Bloomberg the other night I noticed two stories about Europe in the top stories list, one under the other.

When I saw them together I laughed out loud and wondered to myself how many people would see those two stories and understand how related they were. The two stories in themselves represent the real underlying issue with Europe finances, and absolutely nothing is being done about it.

The world is on a knife edge about whether or not Greece will default on its sovereign debt. Let me help the world out…it will because it has no choice. Let me example why.

There are a number of reasons Greece is in the position it is currently in. I am not going to lay blame here, or over-analyse these points. I am simply going to explain what has happened so that I can explain why under the current economic environment it must default on its debt at some point.

The main points are:

I know I have discussed the issues in Europe a number of times, but while discussing this topic with a colleague recently  I realised that I had not really explained the inevitability of the situation well, so I am going to try again.

Let us start from the beginning. If two countries trade with each other under a floating currency system then the exchange rate between those two countries should adjust itself so that the value of each countries production relative to the other is reflected in the exchange rate. Obviously I am ignoring currency speculation and oversimplifying, but by using a floating exchange system the idea is that less productive countries currency value should fall in value relative to the more productive country. The effect of the depreciation should be to make exports of that country cheaper and imports more expensive, thus increasing demand for goods abroad and reducing demand for foreign goods at home. This is an auto-stabiliser for a country’s current account deficit. Experience has shown that it is not perfect because the elasticity of prices between imports and exports is often not equal, but it is an important part of attempting to control current accounts.

The trade between European countries has no such stabiliser because they all use the same currency. Therefore countries of differing productive output cannot use currency depreciation/appreciation as a stabiliser. So when an intra-european trade surplus country such as Germany has a trade surplus with the rest of Europe, those other countries do not get the advantage of their export goods becoming cheaper in the next business cycle.

This means that the only real way for European countries to adjust their balance of trade with other European countries is to compete with each other on productivity. Without technical innovation in most cases that means constraining wages growth, and suppressing the standard of living to match the productive output of the country.  This obviously makes sense economically but was never the promise of the new Europe. But given there is no automatic stabiliser within intra-European trade, if a country does not apply strong fiscal and economic policy constraints on themselves then debts between countries will continue to grow because the ever increasing debts do not have an automatic stabiliser until a crisis point is reached.

It is also important to note that because all countries of the EMU use the euro, which technically should have the value of all of Europe, any country that is less productive than the average of the total of European nations has the exact same issue with international trade as well. For a country like Greece this is a double whammy. They are not only disadvantaged by the fact that they have no auto-stabiliser internally in Europe, but their currency is also overvalued for the rest of the world.

Now I may have confused you a little there, so let me spell out exactly what it means. It means that unless a country like Greece addresses its productivity then it will be losing money to Europe and the rest of the world everyday. Under these conditions they have two choices, slowly lower the standard of living in their country or take on debt to compensate for the fact that money is flowing out though the external trade sector. It is obvious which path they took, and you can see from viewing the following charts of household debt and the current account what the expected outcomes are:

Under these circumstances the nations that were able to constrain wages or had sovereign wealth pursued export driven economies, and in doing so the less productive periphery pursued credit led growth. It was their only option if they wanted to maintain a similar standard of living. Now under these circumstances you would have thought that credit driven economies should have been paying a much higher price for credit than export driven economies, but financial de-regulation meant that this didn’t actually happen. So the trade imbalances fuelled credit growth and, in turn, bubbles in the credit-led economies as the current account surpluses of the export-led economies were recaptured and flowed back to the to credit-led economies. It would seem obvious by now what the problem was, but it gets worse.

Because the amount of credit now flowing into the periphery was so high, nominal wages began to increase: Which meant that the underlying issue of the productivity imbalance became even worse as time went on as can be seen by the relative changes in Unit labour costs for each nation. 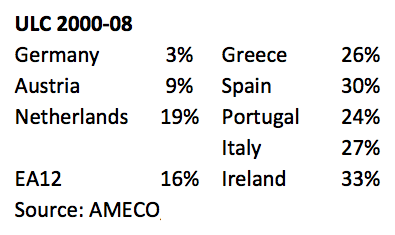 I have read in a number of places that people believe that Greece’s issue was that the country has a culture of tax evasion, which is true but not for the reasons most people think. The fact that Greeks weren’t paying tax to the government meant that the private sector debt was smaller than it would otherwise be under the same circumstances. This meant that the Greek government was taking on the debt of the private sector but this is simply a matter of debt composition. The real issue with tax evasion was that the capital flowing into the country was not being recaptured and was therefore making the current account deficit worse. What Greece really needed was controls over both foreign capital and interest rates and a government with prudent fiscal controls that targeted wage constraint and productivity. It obviously had none of these.

So it was only a matter of time before a crisis hit. Without some built-in automatic macro stabilisers the Greeks continued to use foreign capital and local credit to boost income above their real output and as they did were continuing to lower their competitiveness which made their issues even worse. Like so many countries before them they were living in a debt driven delusion. The country took on debt to the point of crisis because it either would not or could not resolve the underlying issue of competitive imbalance.

Once the crisis hit, the EU and the IMF instigated a rescue package with extensive austerity measures. This seems based on the interpretation that the issues in Greece (and the other periphery nations) result from a lack of fiscal discipline, but as I explained above the issue is far more difficult than just national government’s taxation and spending.  The problem is that this misdiagnosis has not resolved the actual problem.  Since instigating the package, Greece’s unemployment rate has risen significantly.

Which has meant that its industrial production has continued to fall.

And the real underlying issue of a continuing Current Account Deficit remains.

Put simply, austerity isn’t fixing the real problem. While Greece sells its national assets, is wealth continues to leave the country via the foreign trade sector even as unemployment rises. Under these conditions there is simply no way that the country or its people will be able to pay back the debt they have accumulated, and continue to accumulate.

What they need to do is address their competitiveness versus other European nations so that their current account is turned around. To do this while staying in with the Euro will require them to significantly adjust their national average wage downwards, which will mean they will not be able to afford to pay back the accumulated debt.

Either way, default is inevitable.

Life after COVID not so boom

Current inflationary pressures are an inventory