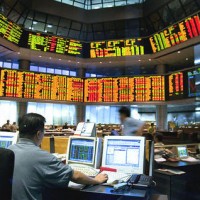 I will be providing this trading update on the ASX100 daily at noon.

AMP: overbought in the short term, but accelerating in the medium term after a rounding bottom. BTFD
ANZ: uptrend is slowing down. Watch for acceleration on external market rallies.
BHP-Billiton (BHP) up up and away. Becoming overbought in the short term.
Boral (BLD): consolidating for a possible upmove? Support at $5 level
Commonwealth Bank (CBA): after a small dip, reflated trend continues.
Fortescue Metals (FMG): Japan correction is over, in steady uptrend. Watch for resistance at $6.90
Lynas (LYC): still in strong uptrend, but not overbought. Appetite is not weakening for REEM.
Macarthur Coal (MCC): rebounding nicely after the Japan/MENA correction. Look for support over $12 to continue.
Newcrest (NCM): on a tear as gold and AUD tear it up
OZ Minerals (OZL): noticing a pattern of resource stocks yet? Good uptrend, far away from resistance.
Primary Health (PRY): is domestic healthcare the next big thing? Looks to be consolidating after good uptrend.
Ramsay Health (RHC): another popular healthcare stock – trying to break through resistance at $19.
Rio Tinto (RIO): opened on a gap and has rallied since, about to hit long term resistance at $89.

Avoid:
Iluka (ILU): nearing the end of its parabolic 2010 rally. Overbought on all indicators and timeframes, but the market can remain stupid for a lot longer. Stand aside.
Leighton (LEI): trading halt on back of bad news and capital raising, but has been in medium term downtrend since December 2010. Might surprise on the upside….
Myer Holdings (MYR): about to fail its support at $3.08? Or will the insto’s come in and bid up? Careful here.
National Australia Bank (NAB): resistance at $26.50 – can it break through?
Orica (ORI): inside bearish day – take care (which means take profits)
Oilsearch (OSH): what’s not to not like about oil these days? Overbought though.
Origin Energy (ORG): as above – again, overbought and last 2 days action is toppy and gappy. Never a good sign.
Paladin (PDN): nuke it.
QBE: totallly rangebound, great for spread writers, avoid for direction.
Santos (STO): in a parabolic trend: only for the brave to keep riding this.
TEN: another dog comes back to its kennel after a rebound rally, but still in sideways bearish stance.
WAN: the half-life thoroughbred will probably survive its marriage to Seven, and the insto’s will likely bid it up (what else have they go to do?) Stay away though.
Westpac (WBC): although it has broken just past resistance, WBC is still in a year long trading range, reflecting its underlying value (i.e well below May 2010 highs when the housing bubble popped).
Woodside (WPL): derr…Today’s action is, well, illustrative.

Losers
Bank of Queensland (BOQ): struggling to rebound from floods. Meeting heavy resistance.
Billabong (BBG): descending triangle, losing support. Another AUD casualty.
Bluescope (BSL): tried to rebound from recent lows, turning down again. Strong AUD not helping here.
Caltex (CTX): in a dip and struggling with refiner margins? Watch closely if it closes below support at $14.80
CSR: failed rebound rally – watch for action around $3.20 if support comes in to buy up.
Harvey Norman (HVN): the bogan’s bogan is dropping fast as no one believes the Adam Carr “consumers are awesome” thesis. Support at $2.82 but could fall to March 2009 lows ($2)
James Hardie (JHX): dropped below local support and has failed its descending triangle pattern. Some support below $6, but watch out if failed.
Macquarie Group (MQG): the upside down vampire squid is falling fast. Watch for break of support at $34. Great stock to trade, wouldn’t own it in any millennium.
Onesteel (OST): small rebound rally has petered out, returning to medium term downtrend.
Newscorp (NWS): the other vampire, has dropped fast in the last 5 days, but still rangebound between $17.10 and $18.30. This is common behaviour. Watch for bounce off support in coming days.
Qantas (QAN): love to fly, love to trade it, wouldn’t own it. Failed rebound rally, dropping like a Rolls Royce engine. Support is nearby though. This Frequent Flyer business with an airline attached is struggling with fuel prices.
Tatts Group (TTS): resumes its medium downtrend after a small rally. Support at $2.18
Westfield (WDC): another retail stock that goes against the Carr-thesis. Some support below $9, but it doesn’t look promising.

Oh My Darlings
CSL and Cochlear are struggling at the moment. One day does not a trend make (they are both down over 2%), but as Sell on News reports on Macquarie’s warning of Dutch Disease, these two healthcare stocks are catching a cold.

The Index
The S&P/ASX200 is up almost 20 points, or .2% to 4960 and is heading for the magical 5000 point level. The V-shaped rebound is slowing down, but as the “Long” list above notes, the resource stocks (which make up a large amount of the index capitalisation – unfairly, in my opinion), are on a tear – because of commodity prices and inflation fears – and it appears the banks are brushing off bad news like fleas. Watch this space. 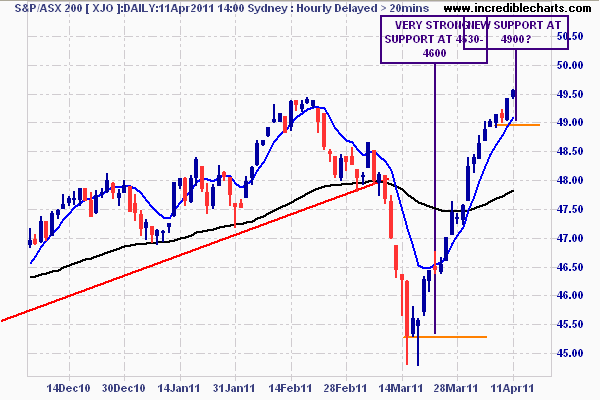 The XJO - slowdown of the rebound and approaching resistance.

Disclosure: The Prince is a full time equities trader, running a personal account. I may have positions (long and short) in some or all of the securities mentioned above. This post is not advice or a recommendation to buy or sell. Do your own research and consult an adviser before allocating capital.