There’s something wrong with this rally.

To be honest, beyond some vague notion of Japanese reconstruction demand, I can’t find any real cause for it. With China clearly not done with tightening, QE2 about to cease, the ECB hiking rates, global growth past its prime and oil punching through $1.10 on Gaddafi’s scorched earth policy, we’re due for a whack.

All of these are macroeconomic markers, but the liquidity issue must feed into trading fundamentals somewhere. In my view it’s commodities.

First, let’s look at Chinese demand in copper and iron ore. The FT has an instructive piece:

Is Chinese copper demand faltering? For the hundreds of miners, smelters, fabricators, bankers and hedge fund managers gathered this week for the industry’s big annual conference in Santiago, that is a market-moving question.

After an impressive bull run that has taken copper to all-time highs of more than $10,000 a tonne, inventories of the red metal are piling up in Chinese warehouses.

From Metal Prices, here are the graphs for copper inventory on the LME, Comex and Shanghai: That looks like pretty much one way traffic to me for the past three months: rising stocks.

Let’s look at iron ore too. The current rally began in July 2010 when the Indian state of Karnataka banned ore exports. Here’s the one year ore chart:

The rally started a week or two prior to the ban but you’d be hard pressed to argue it hasn’t played a major role in keeping speculation roaring on the resulting supply shortage story. As you can see, the rally then went parabolic in November or thereabouts on the massive Chinese build-up of iron ore inventory in ports:

Next, let’s look at the effects of QE2 on commodities. Here’s a chart of the CRB (commodity) index: I mean , holy cow, let’s not look past the obvious. That is a QE2 afterburner rally since late 2010. And to make the point about how overstretched it is, let’s turn to a nice graph from Research Puzzle:

A major divergence between commodity and equities markets. Admittedly, it’s been wider, but only once. Check out too the 120 day correlation block for commodities.

On top of that, as we all know, the Australian dollar has decoupled completely from sense and is running wild and free in Elysian Fields. Data Diary has an excellent post on just how overstretched it has become. It includes this terrific graph on CME leveraged longs:

However, there is one more graph to show that suggests it ain’t over yet by a long shot. From Alphaville: 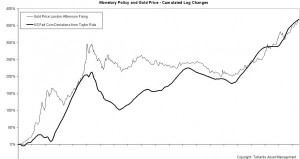 The dark line is the degree to which the Fed has diverged from the Taylor Rule. As you can see, the more it does so, the higher gold (and other commodities) track. Even when QE2 finishes, we will be so far from Taylor Rule monetary settings that it is laughable. Plenty of juice left in the tank.

The ferrous complex was hit on May 24,

The ferrous complex jumped again on May 23,

The ferrous complex was pounded on May 18,