The current Silver rally is exhilarating.

Even as I write this the chart I’ve used below is basically out of date with Silver having soared higher to almost US$42 during Asian trade today, only around $8 below it’s all time nominal high of $50 set in January 1980.

While it has experienced several small corrections along the way, it is obvious that this spike higher in price differs to those seen previously in the bull market, such as those in 2004, 2006 and 2008. Look at a 10 year Silver chart and the current move looks parabolic.

Every dip is being bought. Some dips are literally lasting only hours. This from April 1st: 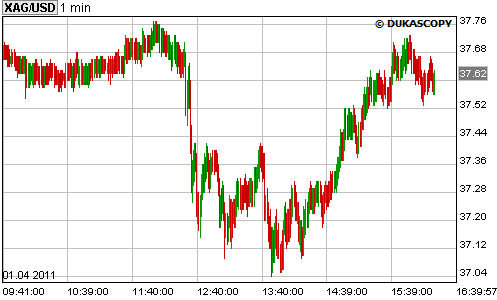 Here’s a chart type that I used a little while back to show the difference between the bull market in the 1970s vs today. A few months on and we’ve seen only one slightly negative month over 8 months of strong moves higher and it’s looking like April will be no exception.

This strength of move has no precedent in the current bull market. It makes me wonder whether we are heading into a power move the likes of which we haven’t seen since the 1970s. For example in the 1970s run there were 3 separate monthly occasions where Silver rose 40% month on month (using the same month on month London fix average). The last two times were shortly before the final 1980 peak.

This move also concerns me.

We have increasing coverage of the rally by mainstream media sources, as well as suggestions that Silver is entering a new paradigm:

Is this just an increase in mainstream support for Silver as we enter the media attention phase of the bull market or is this the start of the mania…?

Some questions that are running through my mind at this time:

– Is this a parabolic spike or the start of THE parabolic move to end the Silver bull market?

– Does Silver necessarily have to peak at the same time as Gold this time around?

– What does the end of QE2 mean for Silver if QE3 does not immediately follow (a gap is looking more likely everyday)?

– Could this information age see the mania phase of the bull market occur at a faster pace than most expect?

Disclosure: Positions held in Silver. Not investment advice. Do your own research.