For a primer on how I do my analysis, read last week’s post. 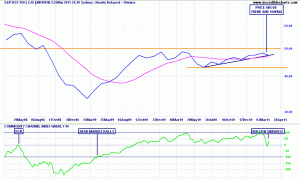 The monthly price is firming up, but still within a sideways band (between 4200 and 5000 points), although above the 260 day moving average, which is steady. The cylcial indicator has moved back to a bullish sideways reading after last week’s correction.

The cyclical indicator shows a strong monkey-picking bottom signal, and is firming up as bullish (crossover of the 0 then 50 line to confirm). Momentum too is positive.

Conclusion: Short term conditions obviously display a rebound rally after a good sized correction. Recent action is a little too fast and may imply a short pullback or sideways day(s) early next week. All the signals are there for a rally to continue.

The secular trend for the ASX200 (XJO) is still bearish, but within there is a definite bullish/sideways bullish bias, with a major correction having found strong support instead of falling to new lows.

As I considered last week, a new post-correction bottom has formed and the likelihood of this being a Dead Cat Bounce has passed (excluding future meltdowns). Behaviour wise, it seems risk markets are willing to take a lot in their stride, when even bad news is absorbed as another reason to BTFD.

The XJO is likely to continue a short term rally in the week ahead, with a possibility of a small consolidation/slowdown period – excellent entry points for directional traders. Those of who remain long term bearish (which includes me) can still profit from short and medium term rallies amongst the secular bear market.

“He Too Fast”
This week’s “kicker” theme/concept to my analysis is a “signal” I’ve discovered that I’d like to share with you. I call it the “KC Signal” for reasons I will get to soon – but basically its a rudimentary method on how to spot a runaway share price. I use it as both an “waiting” entry and “sell into strength” signal.

The signal is simple: look at price action and the short term cyclical indicator. You can use a Relative Strength Index indicator instead (8 day weighted seems to work best).

For price action, I’m looking for a very strong up day that has gapped up – i.e the open is way above the previous day close and intraday high. A further confirmation is a long upper tail, which shows a lot of intraday selling, but the candle still remains tall, with a high closing price. 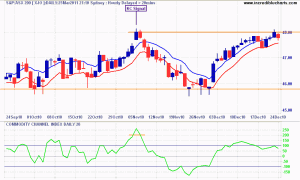 this is child theme caption shortcode

Now look at your overbought indicator: I prefer the short term CCI with a reading above 200 being my confirmation (use 90 for RSI). Rudimentary, but it seems to work.

As an “waiting entry” signal – but only for trends I am not yet long – I watch the next few days carefully. If the subsequent retracement does not go below the KC Signal day intraday low, buying support is still very strong.

As a “sell into strength” signal for short term trends I’m long, its a perfect opportunity to sell at a much higher price. The probability of price continuing to zoom higher is low – at least for ASX100 stocks. Mining exploration/speccie stocks have a higher probability of continued exponential price action, so don’t be surprised if your smug intra-day profit taking leaves considerable paper profit on the table…. And why is it called the “KC” Signal – I’m a MotoGP fan (you might have guessed from my featured images), and when Casey (KC) Stoner came onto the scene, 7 time world champion Valentino Rossi had a lot of trouble keeping up with the then (still) fiery youngster. His post-race press conference, after Stoner beat not just him, but the whole field, always began with his thick Italian accent – “KC…..ehhh…he too fast”.

I used these same words when trawling through decades of price data witnessing the as yet unnamed KC signal popping up every now and again and it kind of stuck. Congratulations on the win last weekend at Qatar Casey by the way!

ASX as overvalued as ever

There are two things that matter in terms of