In mid-2018, the US declared the China American Cold War a go. It comprised a series of ratcheting trade tariffs by the Trump Administration directed at China. these were directed largely at shifting global manufacturing supply chains, especially in technology, away from China. The measures were directed specifically at China’s stated aim of dominating global technology, artificial intelligence and robotics by 2025.

Other dimensions of the growing Great Power conflict included freedom of navigation through the South China Sea where China had constructed series of far-flung militarised atolls that armed the distant approaches to its mainland and effectively claimed that ocean as sovereign Chinese.

The Cold War was also concentrated around Chinese ‘sharp power’ which had made significant inroads in influencing policy outcomes within the US alliance network in and around the Asia Pacific via bribes, debt diplomacy and corruption of media.

The China American Cold War showed all of the characteristics of an historic, ideological struggle between liberal democracy and statist growth that had defined the 20th century battle between the US and the Soviet Union. By David Llewellyn-Smith in China American Cold War, US Economy

You can show a traitor a noose but you can’t stop him from sticking his head in it. For years I have warned prominent Australian investors not to invest in China and watched as they all lost a lot of money. The reason why is not even China’s deteriorating geopolitical circumstances. It is that sovereign

Today I carry on with my recent deconstruction of the writing of Professor James Curran who has swiftly risen in place of Geoff Raby as the AFR’s China apologist de jour. Over the weekend he argued that: The Morrison Government is lost in a dying Anglospheric dream. Recent moves by Dutton to increase American presence 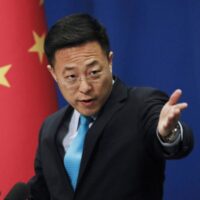 Anyone wondering why the Liberal-National Federal Government did a U-turn on Australia’s relations with China over recent years?  Wonder why Australians still aren’t enamoured with the ALP opposition, despite a government coming across as misogynist, incompetent, and prone to pandering to the whims of corporate Australia and the 1%? Ironically, the barely concealed CCP propagandist

How exactly is this supposed to get Labor elected? China’s chief wolf warrior, Zhao Lijian, has fully endorsed WA premier Mark McGowan: “The Australian government should heed these constructive opinions.” “Face up to and reflect on the crux of the setback in bilateral relations, abandon the Cold War mentality and ideological bias, earnestly uphold the 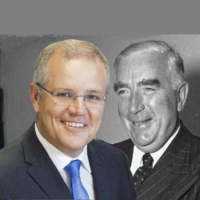 Australia’s personality-disordered PM, Scott Morrison, is galavanting around the world drumming up support to contain China. He’s invited himself to the G7 to lace it with anti-CCP warnings. He’s dropped into Downing Street to spray Beijing. He’s soon off to the White House for an anti-CCP powwow. At home, more US marines and naval access

Australia’s magnificent strategic realignment continues at pace today. As Cold War 2.0 heats up, and Australia sharpens up as the US-led liberal bloc “tip of the spear”, more US marines are hopefully coming Downunder: More US marines may be headed for station in Australia. The joint brigade would be based in Darwin. US naval ships Weeoo, weeoo, weeoo. It’s been far too long since the Pascometer last registered a redline moment. Almost so long that some readers will not even be acquainted with one of MB’s former favourite contrarian indicators. Today the mechanism returns with a vengeance to redline on a subject for which it has zero expertise: China. To

Not according to  Bill Bishop at Sinocism: Comment: David Bandurski of the China Media Project has written an excellent article on the Politburo’s collective study session on global discourse power and the wishful thinking in some quick takes about a change in tone/halt of “wolf-warriorism”. He provides good background on the discussant, Fudan University professor Back in 2018 when MB readers understood clearly where the Australia/China relationship was heading even as the rest of the nation did not, Donald Trump confidante Steve Bannon summarised the US view succinctly: Donald Trump’s former chief strategist Steve Bannon has criticised Australia’s approach to an aggressive China, labelling it weak and saving his most

The China trade war on Australia is not going at all well. Iron ore is trading on a vast geopolitical premium. Damaged commodity trade flows have been redirected to other nations with a minimum of fuss. Australia’s current account surplus has skyrocketed to records. Based on outcomes so far, it’s the best thing to ever I know that I have given our Stan a fearful pounding in the recent past. And I pretty much disagree with every notion he has about Australia’s relationships with the US and China. But today it’s time to sing Stan’s praises for having the cojonies to launch the ABC’s News new program China Tonight. This

Labor has an untold number of greybeards embedded like ticks in the collapsing structure of Australia/China economic relations. It also has a corporate memory that worships Gough Whitlam and his early embrace of a liberalising China. These two sentinels seem to blind Labor to the abyssal-sized paradigm shift that has opened before Australia’s feet on

A terrific summary of the evidence by Nicholas Wade at Bulletin of Atomic Scientists: The COVID-19 pandemic has disrupted lives the world over for more than a year. Its death toll will soon reach three million people. Yet the origin of pandemic remains uncertain: The political agendas of governments and scientists have generated thick clouds

More great news today as overreaching Chinese wolf warriors lose the world. Leading us off is the Biden administration has called for a new independent inquiry into the origins of COVID: It is not clear whether COVID originated from animals of a lab accident. US intelligence will compile a report over the next 90 days.

The arrogance emanating from Australian commentary about its iron ore shipments to China in recent times has been something to watch. There is a collective failure of imagination in the inability to envision the end of the trade. Yet that is what will come, in large part. Today Sinocism has some good advice: Julian Evans-Pritchard

It has been fun to watch PM Morrison’s ceaseless gaffes in foreign and strategic policy drive an accelerated China decoupling. No divorce of this nature could be anything other than incredibly messy so it’s best not to let the perfect be the enemy of such a great national interest outcome. Let the insults and CCP

I have pointed out the inherent anti-Americanism of James Curran, Professor of Modern History at Sydney University, a few times before. Today he returns with more of the same: Robert Menzies blundered horribly when he back Britain in the Suez crisis. The parallels today with Australia’s “questions of identity” regarding China are “uncomfortable”. “Morrison is

Everywhere in the press, it is the same refrain every day. Another Australian export to China is cut off followed by pearl-grabbing over our punishment and whinging about the need for diplomatic reversal. Wednesday it was students. Yesterday it was table grapes. Today it is BHP having a whine about coal. Politics is no different. The developing world order is a Cold War and grand Balkanisation between liberal and illiberal trade blocs. In this outlook, the US leads the liberal bloc versus the China-led illiberal bloc with Europe and ASEAN the key swing states. Over time, I expect the West to make it clear to the CCP that if it

Australia’s personality disordered PM is up to his old tricks today. As the China-Australia relationship plumbs new depths he turns on gaslighting for locals and the CCP alike : The Australia-China relationship is fine, said ScoMo. The trade war on Australia is more “dance than bite.” Which is rubbish, of course. Despite great headline numbers,

A terrific note from The Atlantic’s David Frum sums it all up: China was mentioned only four times in Joe Biden’s first address to a joint session of Congress, but it shadowed almost every line of the speech. “We’re in a competition with China and other countries to win the 21st Century,” Biden said. His

In the last couple of weeks, we have witnessed an extraordinary turn toward warmongering against China in the Morrison Government. The major driver of this swing appears to be domestic politics as Morrison seeks to move beyond Rapegate and Vaccinegate to the safer Coalition ground of national security. How do we know? Because the Morrison

Hugh White normally writes for the AFR. But last week it fully embraced Morrison China warmongering so on Saturday he took his message to a new audience at The Saturday Paper where he no doubt scared the pants off the armchair left. There was nothing new in his dark vision for Australia’s future. His argument

Recent Morrison Government warmongering took a breather yesterday after the CCP struck back by suspending the China-Australia Strategic Economic Dialogue. Frankly, the dialogue has been dead for four years anyway so this rather suggests that Beijing has run out of levers to pull. Ahead, Australia will likely cancel Andrew Robb’s treasonous Darwin port deal as

What could be nastier than unleashing a debilitating pandemic on the world? How about issuing friends with a dodgy vaccine that doesn’t work for propaganda purposes? See Seychelles COVID file: Seychelles is the most fully vaccinated country on earth. But 60% of its vaccines were from Sinopharm. And now it has re-entered lockdown as COVID

It’s not very well thought-through. It’s largely for domestic political consumption. And only accidentally in the national interest. But I’m loving the Australian sabre-rattling over Taiwan triggered by a desperate and dateless Morrison Government. After a few weeks of warmongering by top defence brass, the AFR joins in today with an interview with Taiwan’s foreign

I was reading this piece by Dr David Brophy, senior lecturer in Modern Chinese History at University of Sydney, at Domain and it was all going quite nicely: Morrison Government has talking up war in Taiwan for political purposes. Australians do not agree that we should join any war around Taiwan. Such a war could This is a very important development in the evolving liberal block versus illiberal block cold war led by the US and China respectively. Europe is vital because it is the largest swing state by far. To date, it has been a cowardly waffler, afraid of Donald Trump hawkishness, while courting Beijing. But, things have changed

The Morrison Government recently all-but destroyed its relationship with the female half of the electorate by mistaking a sexual assault crisis for a culture war. Now it is seeking to move on from that in a great hurry and push the agenda back to its safest territory: national security. The new Defence Minister, Peter Dutton,

Taiwan generated some serious angst over the weekend. Chris Joye is thumping the drums of war: The chance of a forced Chinese forced annexation of Taiwan is now above 50%. The probability of war is higher in the next five years than after because the CCP has closed the military gap. Australia will be bombed