As widely forecast the Reserve Bank of Australia (RBA) has dealt another blow to mortgage holders, hiking the official cash rate (OCR) another 0.5%, taking it to 1.85%

Below is the official statement [my emphasis]:

The Board places a high priority on the return of inflation to the 2–3 per cent range over time, while keeping the economy on an even keel. The path to achieve this balance is a narrow one and clouded in uncertainty, not least because of global developments. The outlook for global economic growth has been downgraded due to pressures on real incomes from higher inflation, the tightening of monetary policy in most countries, Russia’s invasion of Ukraine and the COVID containment measures in China.

Inflation in Australia is the highest it has been since the early 1990s. In headline terms, inflation was 6.1 per cent over the year to the June quarter; in underlying terms it was 4.9 per cent. Global factors explain much of the increase in inflation, but domestic factors are also playing a role. There are widespread upward pressures on prices from strong demand, a tight labour market and capacity constraints in some sectors of the economy. The floods this year are also affecting some prices.

Inflation is expected to peak later this year and then decline back towards the 2–3 per cent range. The expected moderation in inflation reflects the ongoing resolution of global supply-side problems, the stabilisation of commodity prices and the impact of rising interest rates. Medium-term inflation expectations remain well anchored, and it is important that this remains the case. The Bank’s central forecast is for CPI inflation to be around 7¾ per cent over 2022, a little above 4 per cent over 2023 and around 3 per cent over 2024.

The Australian economy is expected to continue to grow strongly this year, with the pace of growth then slowing. Employment is growing strongly, consumer spending has been resilient and an upswing in business investment is underway. National income is also being boosted by a rise in the terms of trade, which are at a record high. The Bank’s central forecast is for GDP growth of 3¼ per cent over 2022 and 1¾ per cent in each of the following two years.

The labour market remains tighter than it has been for many years. The unemployment rate declined further in June to 3.5 per cent, the lowest rate in almost 50 years. Job vacancies and job ads are both at very high levels and a further decline in unemployment is expected over the months ahead. Beyond that, some increase in unemployment is expected as economic growth slows. The Bank’s central forecast is for the unemployment rate to be around 4 per cent at the end of 2024. Our liaison program and business surveys continue to point to a lift in wages growth from the low rates of recent years as firms compete for staff in the tight labour market.

A key source of uncertainty continues to be the behaviour of household spending. Higher inflation and higher interest rates are putting pressure on household budgets. Consumer confidence has also fallen and housing prices are declining in some markets after the large increases in recent years. Working in the other direction, people are finding jobs and obtaining more hours of work. Many households have also built up large financial buffers and the saving rate remains higher than it was before the pandemic. The Board will be paying close attention to how these various factors balance out as it assesses the appropriate setting of monetary policy.

Today’s increase in interest rates is a further step in the normalisation of monetary conditions in Australia. The increase in interest rates over recent months has been required to bring inflation back to target and to create a more sustainable balance of demand and supply in the Australian economy. The Board expects to take further steps in the process of normalising monetary conditions over the months ahead, but it is not on a pre-set path. The size and timing of future interest rate increases will be guided by the incoming data and the Board’s assessment of the outlook for inflation and the labour market. The Board is committed to doing what is necessary to ensure that inflation in Australia returns to target over time.

Australia’s inflationary pressures are still mostly imported, including via petrol prices and materials, or due to weather-related issues. Hence, goods accounted for 79% of the rise in the CPI over the June quarter: The broadest gauge of domestic inflation – wages – remains soft, despite the tight labour market. The March quarter wage price index printed annual growth of only 2.35%, whereas the Q1 national accounts recorded only 2.2% growth in average compensation per employee.

Australia’s real unit labour cost (ULC), which according to the Australian Bureau of Statistics “are an indicator of the average cost of labour per unit of output produced in the economy” and “are a measure of the costs associated with the employment of labour, adjusted for labour productivity”, collapsed 6.3% below their pre-pandemic level in Q1: 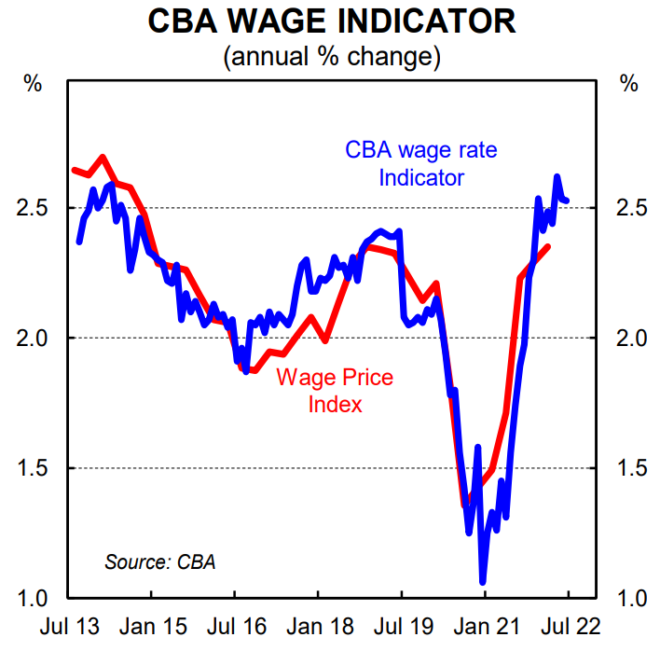 CBA: wage growth yet to accelerate.

Therefore, the evidence suggests the RBA is not facing a wage-price spiral and does not need to run hard against wages growth by aggressively hiking the cash rate. To the contrary, wages in Australia are disinflationary given the falling ULC.

Accordingly, there is little justification for the RBA to hike rates so aggressively to counter imported or weather-related (cost-push) inflation. Such a strategy will exacerbate cost-of-living pressure for households and hammer the economy without relieving the very forces driving the inflation problem in the first place.

Moreover, consumer confidence has never been so weak at the beginning of a rate tightening cycle, already tracking below the GFC at recessionary levels: 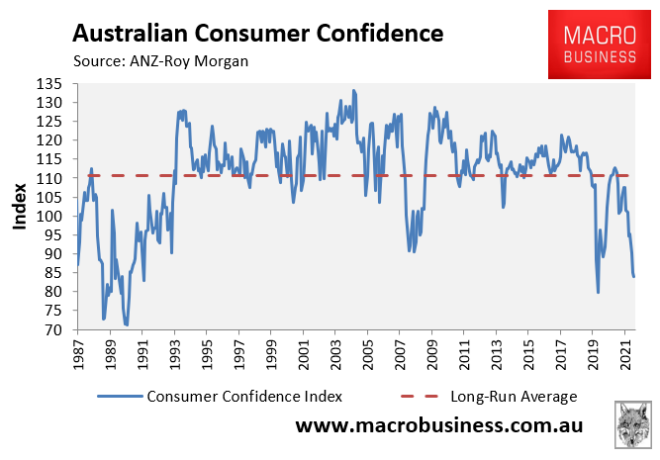 The Lunatic RBA seems hell bent on steering the economy into an unnecessary recession. It will be the “recession we did not have to have”.

At least it has now turned data-dependent following the Fed so 50bps hikes may be over.

In 2021, the Productivity Commission (PC)

Fuel efficiency standards could have save Aussie motorists $5.9bn

A new report by The Australia Institute (TAI)