Yesterday’s 0.5% hike in the official cash rate (OCR) by the Reserve Bank of Australia (RBA) sent another arrow through the hearts of Australian mortgage holders.

Following three consecutive monthly rate hikes, the OCR has lifted to 1.35%, up from April’s record low of 0.1%.

In a matter of days, every variable mortgage holder in the nation will feel the impact, with the average discount mortgage rate set to rise to 4.7%, up from April’s low of 3.45%: As shown above, fixed mortgage rates have already lifted sharply, with the average 3-year fixed rate climbing to 5.7% in June – way above the pandemic low of 2.1%.

The dollar impact of the RBA’s three consecutive rate hikes are illustrated in the next table:

Mortgage repayments have already risen by 16%.

Average monthly mortgage repayments have risen by 16% from their April pre-tightening level.

The AFR’s latest survey of 31 economists revealed a median forecast for the OCR of 2.35% by December and a peak of 2.85% by mid next year. If true, Australia’s OCR would rise another 1.5% from its current level. 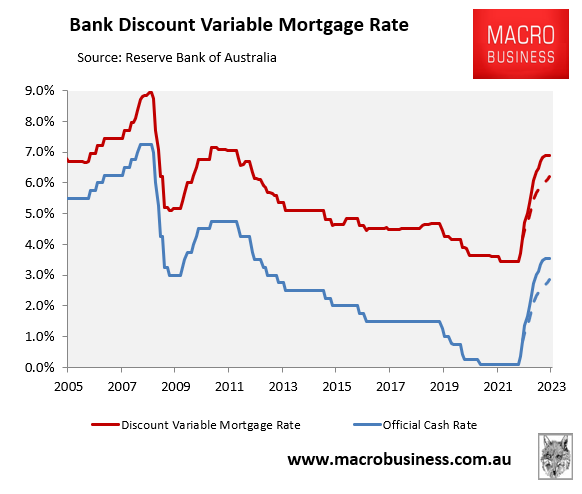 As shown in the next table, average monthly mortgage repayments would soar by 37% (economists’ forecast) or 48% (futures market’s forecast) versus their level in April before the RBA commenced its rate tightening cycle:

Under either scenario, Australian home owners would descend into mortgage hell.