Innes Willox – chair of the Migration Council of Australia and CEO of the Australian Industry Group – was at it again, telling ABC’s RN Breakfast show that the Fair Work Commission’s 5.2% increase in the minimum wage – equating to $1 per hour for Australia’s lowest paid workers – would drive “unsustainable” wage growth that will drive inflation:

“I hate to say we told you so, but we told you so, that this would be the consequence of the Fair Work Commission’s decision to grant a 5.2 per cent increase for those on the minimum wage”…

“It would empower unions to make claims that are, quite frankly, unsustainable for the economy”…

“The fact that the Reserve Bank governor has said ‘look, we’ve got to put a lid on wage rises’, is a statement of the obvious and is welcome. We might say it would have been nice if he’d said it a couple of weeks ago.”

Meanwhile, the actual data shows that Australia’s real unit labour cost (ULC), which according to the Australian Bureau of Statistics “are an indicator of the average cost of labour per unit of output produced in the economy” and “are a measure of the costs associated with the employment of labour, adjusted for labour productivity”, collapsed 6.3% below their pre-pandemic level in the March quarter of 2022: Australia’s real ULC has been falling for 35 years.

Therefore, Australia’s wages have actually been disinflationary, since real wage growth has been negative while productivity has lifted.

Meanwhile, the businesses that Innes Willox shills for have enjoyed record profits as a share of the economy, while Australian workers’ share of the national economic pie has hit historical lows: 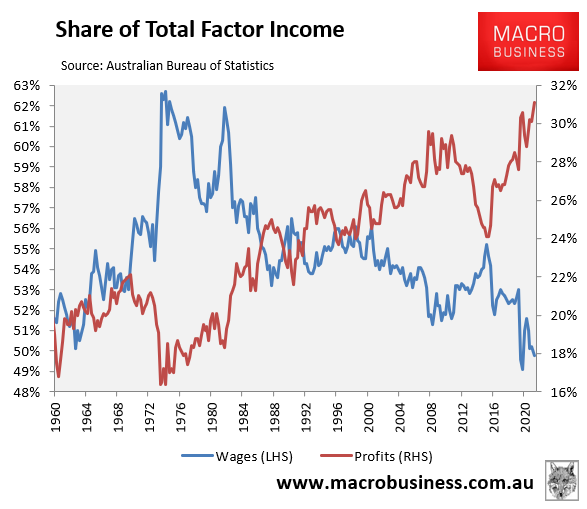 So, if Inness Willox is suddenly so concerned about inflation, why hasn’t he called for businesses to refrain from hiking their prices to fatten their profits? Because it is clearly them that are driving domestic inflationary pressures, not workers.

No one younger than a Baby Boomer could possibly delude themselves that workers could simply demand some huge pay rise and keep striking – or merely threatening to strike – until their employer caved in and granted it.

Or believe that, as really was the case in the 1970s and 1980s, the quarterly or half-yearly “national wage case” awarded almost every worker in the country a wage rise indexed to the consumer price index. Paul Keating abolished this “centralised wage-fixing system” in the early ’90s and replaced it with collective bargaining at the enterprise level.

John Howard’s changes, culminating in the Work Choices changes in 2005, took this a lot further, outlawing compulsory unionism, tightly constraining the unions’ ability to strike, allowing employers to lock out their employees, removing union officials’ right to enter the workplace and check that employers were complying with award provisions (now does the surge in “accidental” wage theft surprise you?) and sought to diminish employees’ bargaining power by encouraging individual contracts rather than collective bargaining…

All these changes in the “institution arrangements” for wage-fixing are before you take account of the way organised labour’s bargaining power has been diminished by globalisation and technological change making it so much easier to move work – particularly in manufacturing, but increasingly in services – to countries where labour is cheaper.

In the ’80s, about half of all workers were union members. Today, it’s down to 14 per cent, with many of those concentrated in public sector jobs such as nursing, teaching and coppering.

All this is why fears that we risk returning to the “stagflation” of the 1970s are indeed out of fantasy land.

It is wrong of Innes Willox to blame Aussie workers for inflation while businesses ruthlessly gouge consumers and make obscene profits.

The fact that Australia’s captured business media continues to run this line is an even bigger disgrace.