Economists have slammed the Reserve Bank of Australia (RBA) for relying on business liaison, rather than actual data, to claim that Australian wage growth was strong, which was then used to justify aggressive hikes in interest rates:

The bank obtains evidence of wage growth from its in-house liaison program as well as through well-established business surveys.

The liaison program involves 70 meetings a month, on average, between the RBA and businesses — the majority being individual firms varying in size from large to small…

“While the various data compiled by the ABS (Australian Bureau of Statistics) have not yet been released, other evidence received over the past month through our business liaison and our business surveys has indicated that there is now strong upwards pressure now on labour costs and that this is likely to continue,” Mr Lowe said.

But Rae Dufty-Jones, an economist and associate professor at the University of Western Sydney, said it was not appropriate for the Reserve Bank to use that data alone as evidence of larger wage increases.

“It’s not a representative sample,” Dr Dufty-Jones told The Drum.

“It would not be what you would describe as statistically valid”…

“But that in itself should not inform monetary policy,” she said.

“It doesn’t provide you with an overall picture of all businesses and where they sit in terms of wages.”

“I think the RBA had dug itself into a hole whereby it needed evidence that wages growth was starting to accelerate in order to satisfy its precondition for starting to raise rates, that underlying inflation was sustainably within the 2 to 3 per cent target range.”

“They couldn’t find that evidence in any of the ABS wages data and went fishing and caught a tadpole.”

Too right. For more than a year, the RBA stated it would be “patient” on lifting interest rates, and would not hike rates until annual wage growth surpassed 3%, which would signal that underlying inflation was “sustainably” within its target band, rather than temporarily imported on the back of supply-side shocks.

The RBA said that it would wait to see the actual wage growth data, rather than relying on expectations. This was an admission that the RBA had gotten wage growth forecasts horribly wrong over the prior decade, continually predicting a wage breakout only to see actual wages crater: 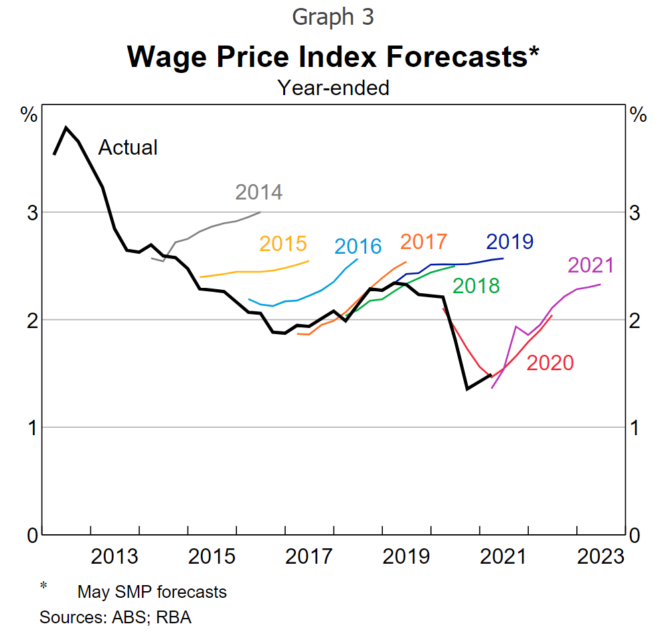 In mid-March, the RBA released its Minutes of the Monetary Policy Meeting, which once again pushed back hard against the notion that rate rises are imminent, citing that wage growth had yet to hit its 3%-plus trigger:

The Board will not increase the cash rate until actual inflation is sustainably within the 2 to 3 per cent target band… Wages growth also remained modest and it was likely to be some time before aggregate wages growth would be at a rate consistent with inflation being sustainably at target. The Board is prepared to be patient as it monitors how the various factors affecting inflation in Australia evolve.

Specifically on wages, the RBA noted that they had only recovered to sluggish pre-COVID levels:

Wages growth had picked up, but only to around its pre-pandemic rate… Across industries and states, wages growth outcomes had been unusually tightly clustered in the low-to-mid 2 per cent range. While the share of jobs recording wage increases of 2–3 per cent had recently returned to around pre-pandemic levels, the share of jobs with wage increases above 3 per cent had been little changed in recent quarters… Surveys of unions’ expectations had also been consistent with wages growth of around 2½–3 per cent over the year ahead.

The rest is history. The RBA caved on its “patient” stance, hiking rates by 0.75% over May and June without confirmation from the ABS of strong wage growth. So, instead of relying on the actual wage data, the RBA instead deferred to the same business liaison that had prompted the RBA to erroneously forecast wage breakouts for the past decade.

The actual wage data has once again humiliated the RBA, with the ABS’ wage price index rising by a soggy 2.35%: The national accounts also showed that Australia’s real unit labour cost (ULC), which according to the Australian Bureau of Statistics “are an indicator of the average cost of labour per unit of output produced in the economy” and “are a measure of the costs associated with the employment of labour, adjusted for labour productivity”, collapsed 6.3% below their pre-pandemic level in the March quarter and have fallen for the better part of 35 years: Thus, wages in Australia are actually disinflationary given the falling ULC.

The RBA has blatantly contradicted its previous assurances that it would wait to see actual wage growth before lifting rates, instead relying on the same industry expectations that had proven wrong for a decade.

It is because of its flipflopping, data fudging and faulty guidance surrounding rates that Australians no longer trust the RBA.

Bill Evans of Westpac is serenely cheering on the