The Bank for International Settlements (BIS) has released its global household debt statistics for the December quarter of 2021. This data shows that Australia once again took the silver medal for household debt when measured against Gross Domestic Product (GDP). However, because mortgage rates fell so sharply over the pandemic, Australian household’s debt repayment ratio – i.e. principal and interest repayments as a share of disposable income – has also fallen; although it remains well above the other English-speaking nations surveyed: 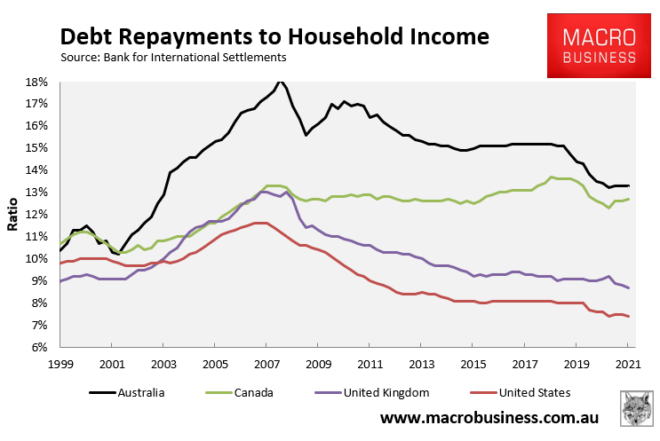 The situation had begun to change, however, even before the Reserve Bank of Australia (RBA) commenced its rate hiking cycle. The next chart combines the BIS series with the RBA’s household/mortgage interest payment data: However, the green line in the above chart is interesting. It shows that total household debt repayments (i.e. both principal and interest) rose slightly between the March and December quarters on the back of the sharp appreciation of housing values: The implication going forward is obvious. Fixed rate mortgages had already risen sharply since the December quarter, whereas variable mortgage rates have just risen on the back of 0.75% of hikes in the official cash rate (OCR) by the RBA: With economists and futures markets tipping mortgage rates of between 6% and 7% by mid next year, total household debt repayments are set to soar to around the 2008 Global Financial Crisis peak (economists’ OCR forecast) or well above it (futures market’s OCR forecast): The upshot is that the proportion of Australian household income going towards debt repayments will rise sharply, which will sap disposable income, restrict consumption spending and growth, and will put strong downward pressure on house prices.

At the start of the Global Financial in 2008, the RBA mistakenly hiked the OCR by 1.0%. After the economy ground to a halt and house prices began to fall, the RBA was forced into a sharp reversal whereby it slashed rates by 4.0% over just six months.

I can see similar happening again after the RBA again goes too hard on tightening. I wouldn’t be surprised to see the RBA once again being forced to cut rates aggressively in the second half of 2023 to counter deep falls in house prices and a recession.