The ABC has done an interesting report on Australians that took out fixed rate mortgages over the pandemic and are now fearful that their repayments will balloon once their loan terms expire:

Ms Ibrahim and her partner took on a home loan of more than $1.5 million in Sydney, with a deposit of 10 per cent.

They are among almost 40 per cent of Australians with mortgages who have locked in ultra-low fixed rates and will roll off them as soon as next year, and potentially face a world of financial pain.

“We fixed the majority of our mortgage for two years, and we assumed that in the next few years, they wouldn’t really go up much,” Ms Ibrahim told ABC News…

For Ms Ibrahim and her family that means a rise of almost $20,000 a year on their mortgage repayments.

“That has been really anxiety-inducing — to think that interest rates will go up by that much and that we would have to try to weather such a large increase at a time when there [are] obviously other upward pressures in relation to the cost of living,” Ms Ibrahim said.

The next chart shows that fixed rate mortgage lending boomed over the pandemic, lifting its share of new mortgages to a record high 45% late last year: 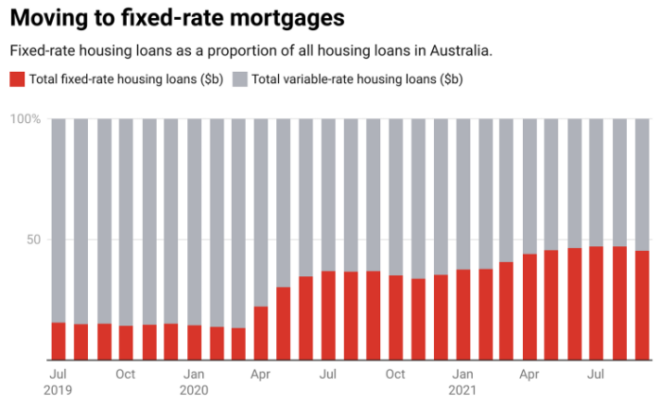 This boom was driven by the sharp reduction in fixed mortgage rates to below 2%: Australian fixed mortgage rates fell below 2%, but have risen sharply.

According to CBA head of Australian economics, Gareth Aird, around $500 billion worth of fixed rate mortgages are due to refinance by the end of 2023.

Under the economists’ median interest rate forecast, the average discount variable mortgage rate will rise to around 6% by mid next year, whereas the futures market is tipping mortgage rates above 7%.

If either scenario comes to pass, the pandemic fixed rate borrowers would face a tripling or more in their mortgage rates when it comes to refinance. And given Australian house prices are forecast to fall sharply over the same period, many would also face negative equity.

The impact would be disastrous for these households, the economy and the housing market.