The ACTU has submitted a revised minimum wage claim to the Fair Work Commission (FWC) in response to the spike in the inflation rate to 5.1%. The peak union body is now seeking a minimum wage rise of 5.5 %, or $42 per week, up from its initial claim in late March for a 5% increase when inflation had been forecast to peak at 4.25% in mid-2022.

There are 1248 words left in this subscriber-only article.

“Wages are not pushing up inflation and there is ample room for positive real wage growth without adding to inflationary pressures,” [the ACTU] said.

However, Australian Industry Group chief executive Innes Willox said “the even higher increase in minimum wages now proposed by the ACTU clearly adds substantially to the risks of entrenching inflation and greater increases in interest rates”.

“Such outcomes would have adverse impacts on the economy, on unemployment, underemployment and sentiment and would be a setback for many low-income households,” he said.

McKellar said unions were pushing for “aggressive wage increases in the absence of productivity growth”.

However, the ACTU’s submission says that labour productivity, while averaging 0.9 per cent over the past five years, actually grew by 2 per cent in 2021 – at the same time as workers suffered a 1.2 per cent real wage cut.

“The problem is workers are not being rewarded for their efforts to increase productivity with commensurate and proportionate real wage increases,” it said.

Unions’ wage claims are understandable given both headline inflation and inflation expectations have soared above 5%, on the back of soaring petrol prices. 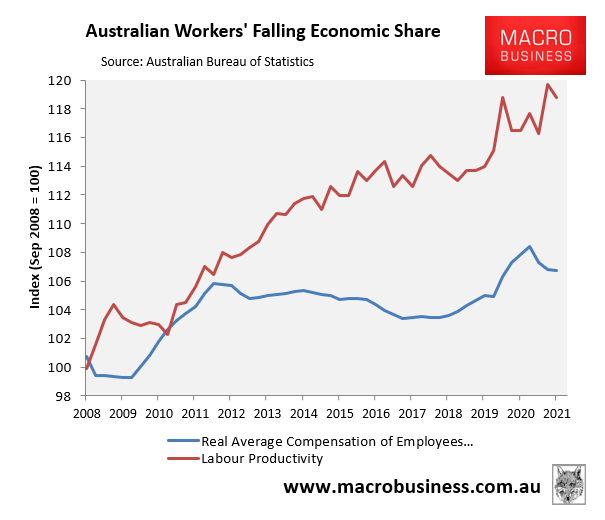 This drove wages’ share of national income to around its lowest level on record: That said, the ABS’ employee cost of living index rose by a smaller 3.8% in the year to March, suggesting cost of living pressures are less than what unions claim:

In theory, workers should be compensated for underlying inflation (3.7%) plus any labour productivity. Viewed this way, the ACTU’s 5.5% wage claim is not as outlandish as the employer groups claim.

The concern is that the unions’ minimum wage demands, if not matched by productivity, will lift labour costs and aggregate wage growth, which would prompt the RBA to raise interest rates more aggressively.

The FWC will need to tread carefully. Perhaps a minimum wage increase of around 4.5% is a fair compromise.