Nordea with the good news. My own view is that this will all happen faster and more brutally as a stock market crash tightens US financial conditions and consumers buckle triggering a trade shock everywhere else.

Plenty of central bank action remains in the pipeline, but a lot is also already priced in, leaving more room for swings in rates in both directions. We do not think that yields have peaked and see more dollar strength ahead this year.

There are 2463 words left in this subscriber-only article.

The Fed delivered the first 50bp rate hike in more than 20 years and the ECB’s signals still continue to become more hawkish. While the general outlook remains fraught with uncertainty, we expect

After constantly surprising to the hawkish side lately, the Fed’s message earlier this week was greeted by a significant fall in short rates and a rally in equity markets. The biggest reason for the market moves were Powell’s comments that the Fed is not actively pondering bigger-than-50bp rate moves at individual meetings, while strongly suggesting 50bp hikes were in store at least at the next two meetings. Ahead of the meeting, financial markets had been pricing in a clear chance of a 75bp move at the June meeting.

The market reaction suggests that the Fed has finally caught up with market pricing and that the Fed’s hawkish twist may finally be complete, even if a lot of work remains. It would be tempting to conclude that the pricing of Fed hikes has now peaked and that the same would apply to longer bond yields. We disagree.

The Fed’s message did not change the big picture materially. The inflation picture remains daunting, financial conditions have not tightened by nearly enough to tame inflation and the Fed has a lot of further work to do. The fact that the Fed is not actively pondering bigger rate increases now does not prevent the market from pricing risks of such moves again later if warranted by data. In addition, the pricing longer out could still adjust higher, and we see risks tilted towards the Fed eventually needing to raise rates higher than the market is currently pricing. We expect the Fed to hike rates by 50bp in June and July, followed by 25bp hikes until the rate reaches 3.5%.

The outlook does remain uncertain, and we see plenty of risks both ways. In the short term, we see risks tilted towards an even faster increase in yields, but going into next year the risk picture starts to tilt downwards. The rapid tightening in financial conditions that the Fed is seeking is a clear headwind for the economy, while the higher energy and food prices along with the generally high inflation will take their toll on consumers, especially in the Euro area. Wobbly equity markets in the US and the chance of swiftly higher Euro-area bond yields in countries such as Italy are additional risk factors. In short, volatility is set to remain elevated.

The Bank of England’s (BoE) warning of recession risks was a timely warning that the focus of central banks may also shift the other way quite quickly. While the majority of BoE decision-makers still guided the markets to expect further rate hikes after the most recent increase to 1%, some members did not find such guidance appropriate any longer.

The string of hawkish Fed surprises ended this week 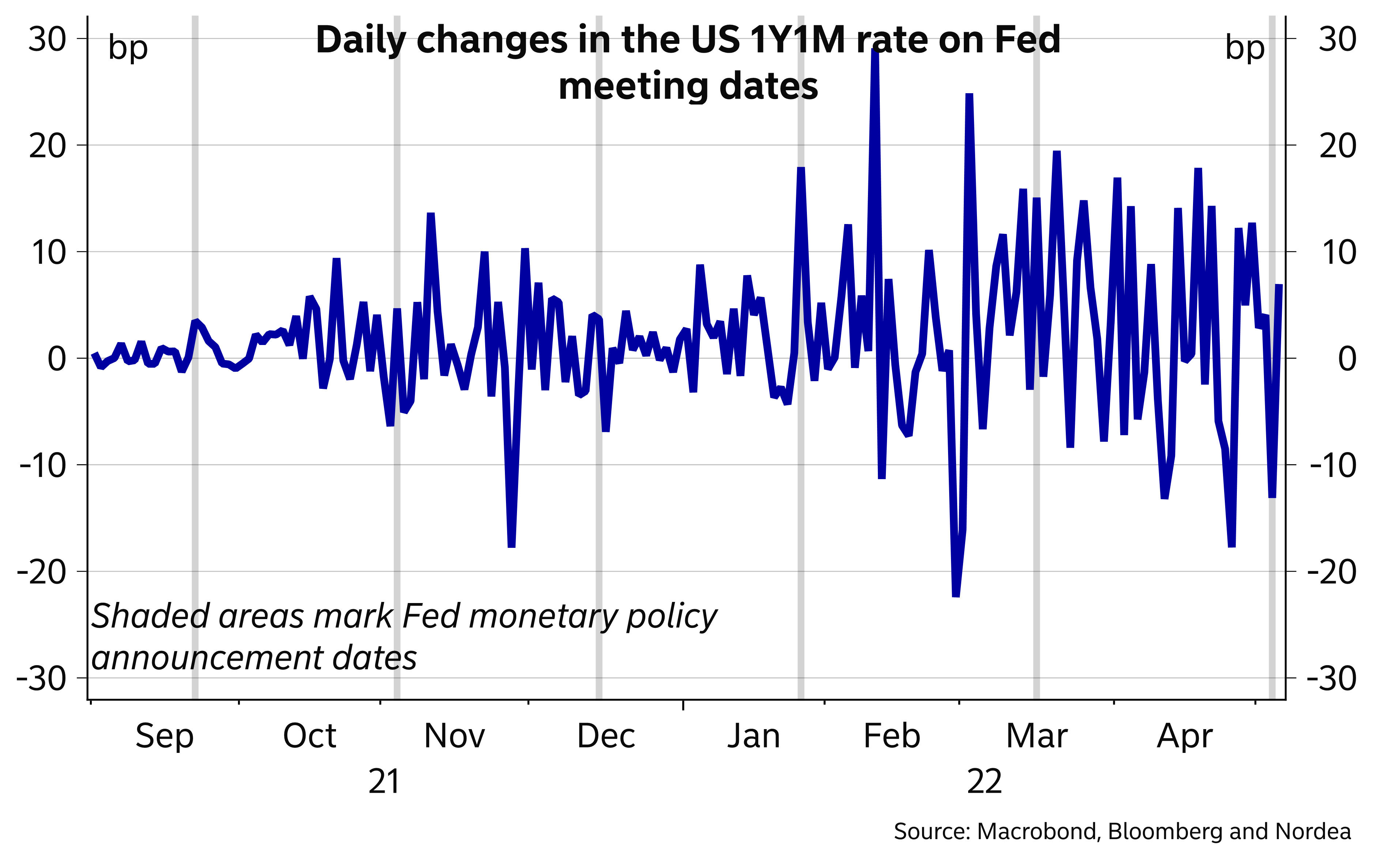 US financial conditions tightened, but the Fed has more work to do 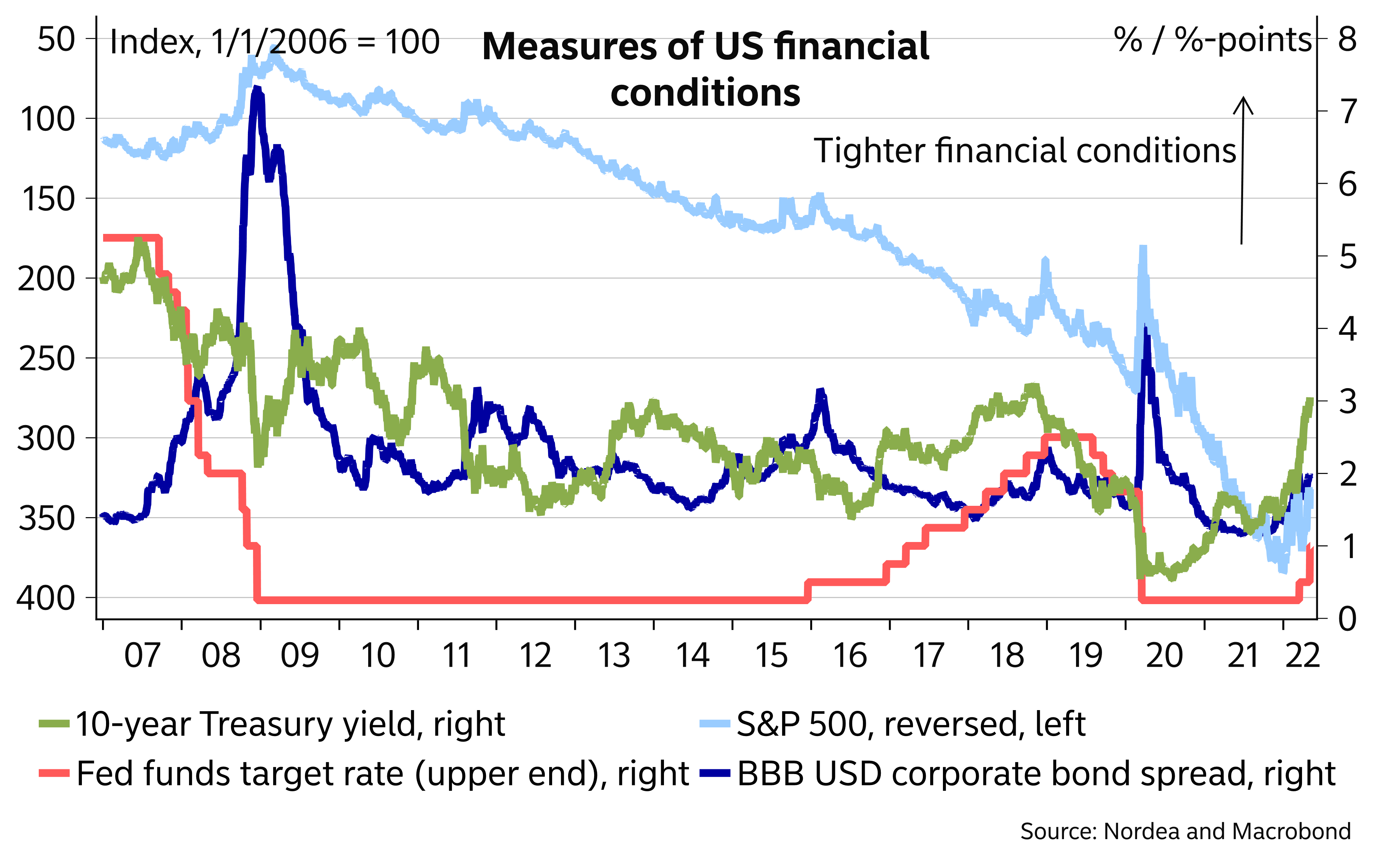 The ECB’s signals have constantly become more hawkish, pointing to a hike as early as the July meeting. This is also our baseline forecast. We see further 25bp moves in September and December this year and then quarterly in 2023, which would leave the deposit rate at 1.25% at the end of next year. Net asset purchases could be concluded already at the end of June, or by mid-July at the latest.

In addition to the ECB’s signals, we find support for such a path from our growth and inflation views. We see Euro-area growth slowing only to around potential next year, and see core inflation above the ECB’s 2% target for practically our entire forecast horizon.

Further, the desire to at least normalise policy is strong within the ECB, and the starting level for rates is very low. It should thus not take more than inflation at around the 2% target at the end of the ECB’s forecast horizon to support the case for continued rate hikes.

Financial markets price in almost four hikes by the end of this year and another four for next year. Given the ECB’s desire to start tightening policy soon and at least to get rid of negative rates rather rapidly, we see risks tilted towards the four hikes that the market is pricing in for this year. However, going into next year, we see risks that the economy will slow down more clearly, which together with falling inflation could persuade the ECB to slow down or even stop its rate hikes. As a result, we see risks tilted to the downside for the rate path we forecast for 2023.

Intra-Euro-area bond spreads have widened clearly again lately, and we see an increasing chance that the ECB will need to come up with a new tool to tackle the risks of fragmentation at the same time as it continues to hike rates. This tool is likely to take the form of a targeted new bond purchase programme of a limited scale that would not need follow the capital key. However, we think discussions of such a programme are at an early stage, and such a tool is not likely to see the daylight until late this year at the earliest. For now, the ECB is likely to continue to point to the flexibility of its reinvestments under the Pandemic Emergency Purchase Programme (PEPP). 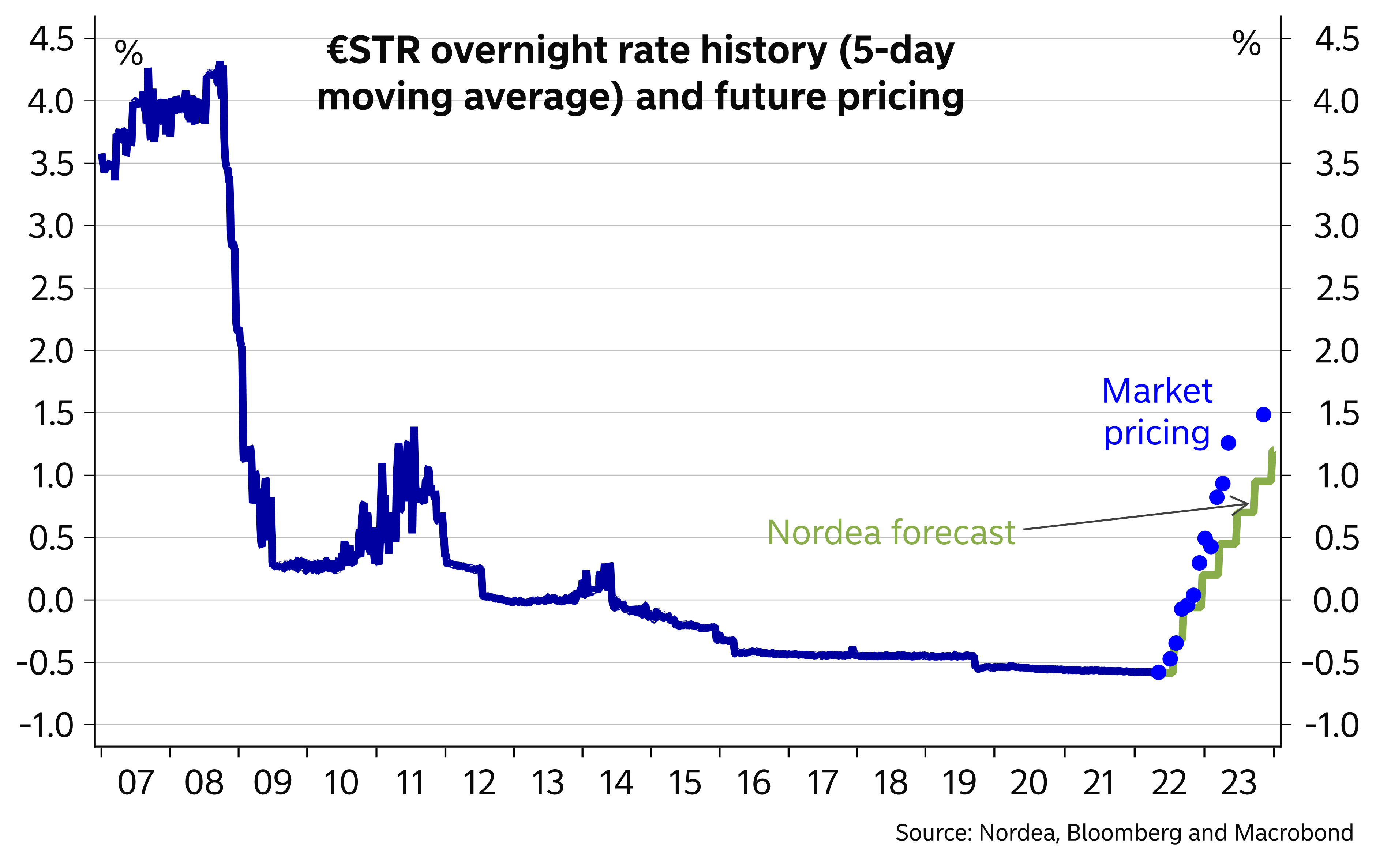 We continue to see long US yields peak at just above 3.5% around the middle of next year, but the ECB’s more hawkish rate path translates into clearly higher Euro-area yields later in the forecast horizon than we forecast before. We now see the German 10-year yield hit 2% at the end of next year.

Curve flattening will still be the name of the game, and ECB rate hikes will not translate one-to-one into higher long yields. Still, the fact that also longer real yields have been able to head higher lately does signal more trust in the growth outlook and opens room for further increases in long yields. Further, the US 10-year Treasury yield appears to have been able to climb above the psychological 3% level and the German 10-year yield above 1%, which is also a sign yields have more room on the upside.

As written above, we see risks tilted to the upside in the near term, but to the downside longer out. 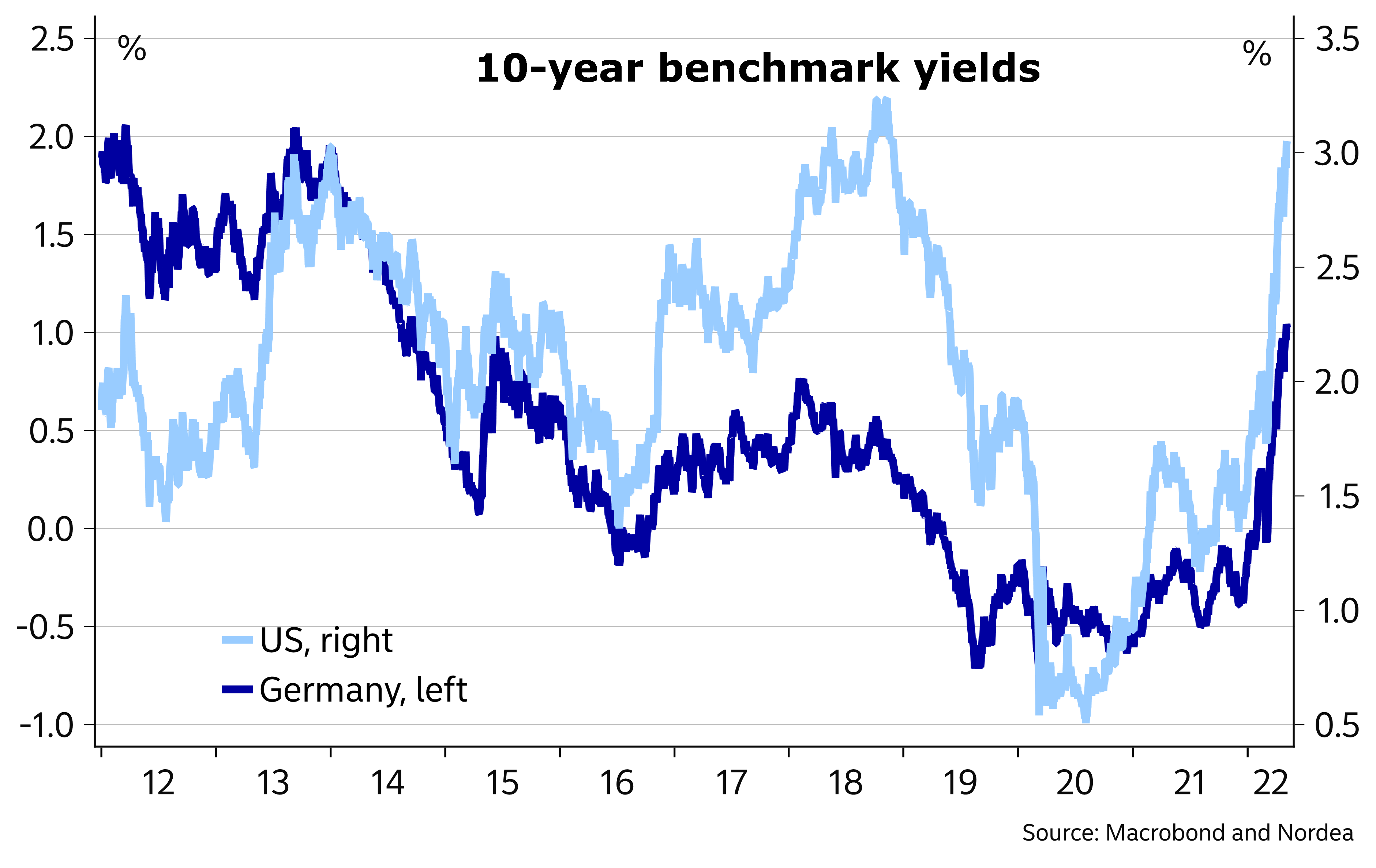 Dollar to remain king for a while

We expect the USD to continue to benefit from even higher rates, tighter liquidity and elevated uncertainty in financial markets. The USD should also benefit from the US’s commodity exporter role (food and energy) and the fact that most commodities are priced in USD. The dollar is thus like an insurance that pays out a premium. What’s not to like?

The ECB is changing gears and markets are pricing four rate hikes this year while we expect three. However, the euro will remain vulnerable as long as the threat of production curbs over the winter due to energy security hangs over the EU head. The high uncertainty for the economic outlook in the Euro area is bad news for the euro – the ECB’s upcoming rate hikes will just lessen the pain for the euro.

We believe the dollar will keep the upper hand in the current environment. EUR/USD has broken below 1.05 for the first time since 2016. This break lower leaves EUR/USD poised for a further move down in the months to come. A higher rate differential and the safe haven status of the USD also argue for movements lower. Hence, we see EUR/USD move down to parity (1.00) sometime before the year-end. At some point, however, the tide will turn. Likely when the Fed reaches the peak of its hiking cycle by summer next year. We expect EUR/USD to end 2023 around 1.10

Next week is all about inflation figures

In the US, inflation figures coming out on Wednesday will be the highlight of the week. The April print marks the first print in a long time, which on a year-on-year basis will be decelerating compared to the prior month. We expect the April CPI headline figure to show that inflation fell to c. 8.2 y/y (consensus: 8.1) and core inflation to fall to c. 6.2 y/y (consensus: 6.1) as we compare prices to last spring’s hefty price increases. There is some additional uncertainty about this print as The Bureau of Labor Statistics is replacing its data provider on the New Cars & Trucks component, which contributed 0.47 percentage point to the March headline CPI. The new data and its methodology implies that inflation on New Cars & Trucks has been even worse since the start of the pandemic compared to the old index. In addition, it is showing no signs of slowing, but the bulk of the price increase happened in the spring of last year, implying a higher basis effect.

Chart 4. US inflation to stay sticky 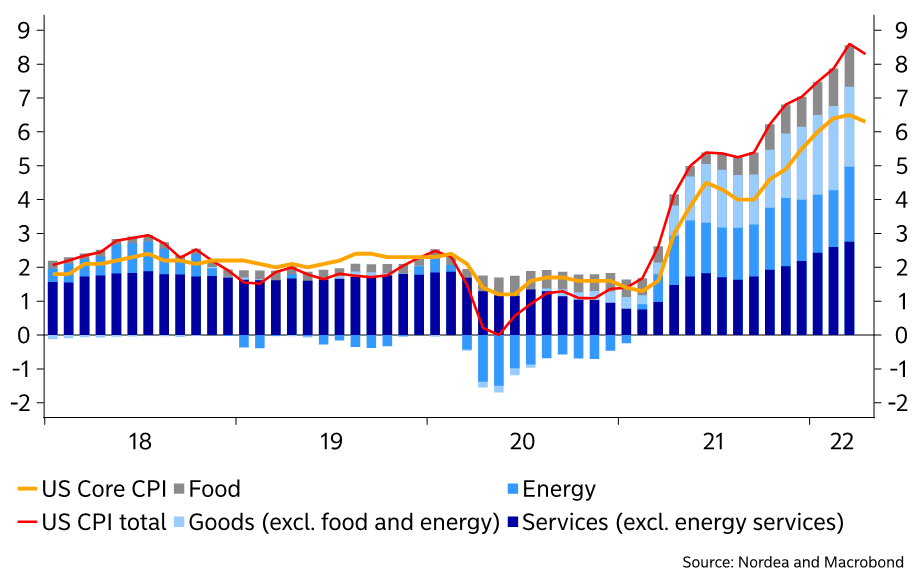 Asian share markets are seeing quite a bit of

DXY was hammered overnight and that reversed all