Having a sore throat and an effective muzzle has delivered Albo his best week of the campaign so far.

While the Labor leader is on his back, the shockingly biased media has had to focus on the government and it is not faring well.

The latest polls have been a little more Labor friendly too. Mark the Ballot:

Two new polls in the past 24 hours, one from Ipsos, and the other from Newspoll. This is the second Ipsos poll we have had since the 2019 election. The previous Ipsos poll was conducted between 30 March and 2 April. As published, both polls had the same two-party preferred (2pp) voting estimate as the previous poll in that pollster’s series.

I prefer to calculate the 2pp estimate from the publish primary vote estimates myself. According to my calculations, Labor is ahead in Newspoll with 53.1 per cent and in Ipsos with 54.2 per cent of the 2pp vote. On this basis, Ipsos shows a small movement to the government from its previous result with Labor on 54.9 at the end of March. Newspoll is marginally (but not meaningfully) more favorable to the government, from a previous result one week ago of 53.3 per cent.

These polls are consistent with a comfortable Labor win at the next election.

We can see how the individual pollsters are tracking this election in the following charts. As I noted yesterday, the exponentially weighted moving average can be slow to recognise changes (at the right hand end of the series). The LOWESS regression can be overly influenced by the final points in a series, and at a time of change it may initially overestimate the scale of that change. Also note: the Ipsos series is not long enough to calculate a LOWESS regression. 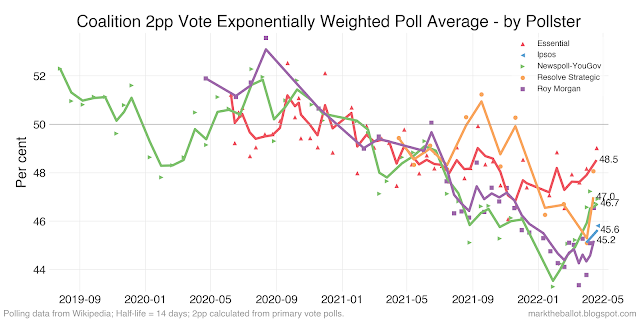 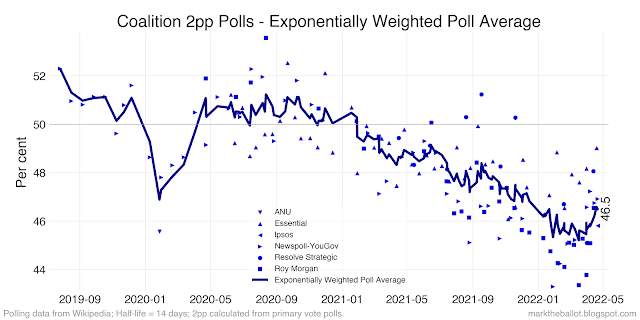 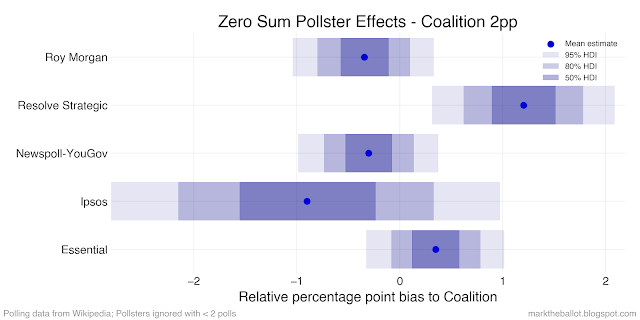 The story here is much like the headline from the individual polls above. If Labor got 53.3 percent of the 2pp vote share at an election, it is most likely to win the election comfortably.

The problem with Albo’s campaign to date is that he got out of bed to begin with.

QLD devoured by own energy monster

The MSM has been enjoying its usual fixation with