Nordea with the note.

Due to the huge uncertainty prevailing we drafted three scenarios for the economic consequences of the Russian attack. While uncertainty is high, we think the bar is high for the ECB to fully abandon the plans of policy normalization.

The negative impact of the Russian attack on both the Russian and the Euro-area economies depends greatly on the future steps of the conflict and the resulting actions from the West. We thus outlined three scenarios for the war, which lead to very different economic outcomes. Obviously, the uncertainty around the future development is exceptionally high and we are reluctant to give any exact probabilities to each scenario, but note that based on the recent news flow the probability of the more pessimistic scenarios has increased.

Uncertainty around economic impact is huge 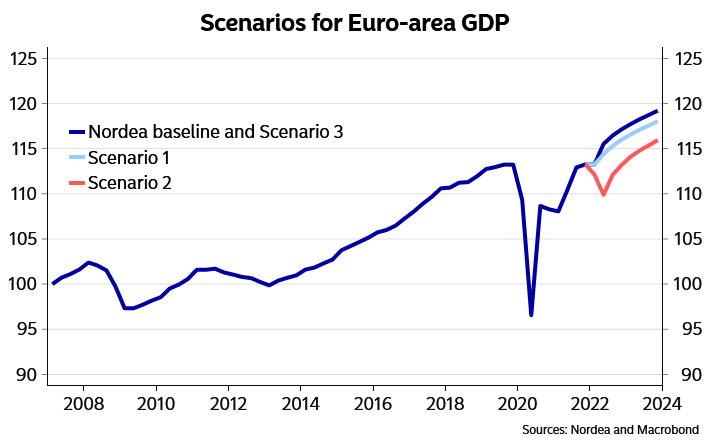 In this scenario, we assume that Russia continues to attack Ukraine but the intensity of war declines, casualties remain limited and it becomes more like a frozen conflict. The sanctions decided so far will continue to apply but do not have a material impact on the Russian energy exports to Europe.

The risk premia in the energy market will be present for longer, but as Russian energy exports continue, there will not be any further spikes in prices. Prices will stay around the current elevated levels through the spring and summer, then recede only gradually thereafter.

Russian economy is suffering a lot from the sanctions already now and we expect the uncertainty to continue to prevail around especially the financial sector and payment systems. The high inflation stemming e.g. from the weak RUB will decrease the purchasing power and hurt consumption substantially. Fixed investments will be hit by high financial costs, prevailing uncertainty and lack of foreign partners. Thus, the Russian economy is entering a recession, but does not collapse, as the energy and raw material sectors continue to provide stability.

Euro-area economy is directly hit by a dramatic decline in exports to Russia. But given their small role (the value-added created by the exports to Russia amount to less than 1% of Euro-area GDP), the hit to the economy is limited. Elevated uncertainty and high energy prices are likely to weaken investment growth slightly in the coming months but in a longer run, the European countries are likely to push for a rise in self-sufficiency in the energy sector which is going to increase investments and compensate the weakness of investments in the other sectors. Thus, in this scenario, the impact on Euro-area GDP is negative but limited.

Euro-area inflation will jump in the short-run due to high energy prices. High headline inflation is likely to lead into slightly higher second-round effects but those are mostly compensated by slightly weaker labour markets. This implies that in the medium-term, the deviation from our baseline forecast is marginal.

The ECB will need more data to assess the impact of the war on the European economy, but knowing that inflation will increase further in the near term and being worried about the pick-up in underlying inflation pressures seen before recent escalation in geopolitical risks, it wants to have more flexibility to act, as needed. It will decide to fasten the taper of its net asset purchases, seeking to end them during Q3, but pledge to continue them longer or in larger magnitudes, if needed to prevent an unwarranted tightening of financing conditions. The central bank will also break the link in its forward guidance that states it will start hiking rates soon after net asset purchases end. The first rate hike will be delayed until early 2023.

Euro-area financing conditions not tightened since the Russian invasion 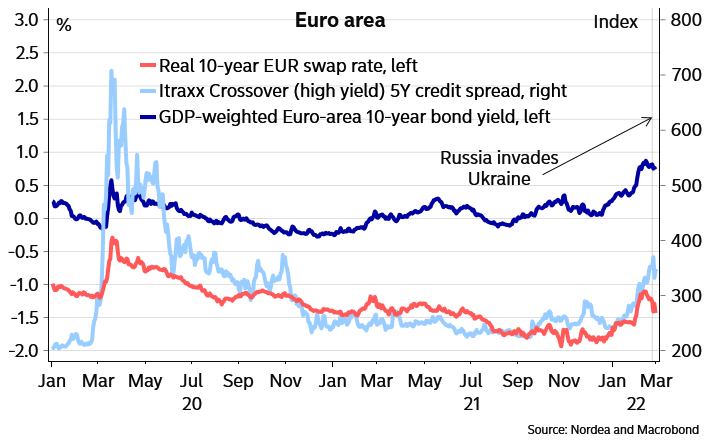 In this scenario, we expect more civilian casualties to take place and the US and the EU to respond by adding more sanctions, including harsh limits on energy imports from Russia.

Sanctions on Russian energy exports will lead to a near-term collapse in global energy supply, pushing prices steeply up (crude oil to around USD 150 per barrel). Even at best, it takes time for Europe to find alternative sources of supply and for Russia to find alternative buyers for its energy exports. While the highest energy prices will be seen already during the spring and prices will fall thereafter, they will remain higher than in the other scenarios throughout the forecast horizon.

Russian economy would suffer hugely in this scenario, as on the top of the negative effect seen in scenario 1, the challenges in the financial sector would turn out to be even more devastating and the export sector would experience a massive decline. Russia could continue energy and raw material exports to e.g. China and India but those could not compensate for the Western markets. As a result, also the public sector balance would rapidly deteriorate which would limit the capacity for fiscal easing.

Euro-area economy would be mainly hit by higher prices of energy and the resulting uncertainty. Both household and business confidence would suffer much more than in the scenario 1 denting both consumption and investments. Euro-area would end up in a short recession even if public sector would ease the pain by increasing compensations for higher energy prices.

Government support measures to soften the blow of higher energy prices will lead to higher public deficits and more government bond issuance, which in turn will increase the need for ECB bond purchases. The ECB will buy bonds in size throughout 2022, but will end them in the first half of 2023, as the Governing Council has become more reluctant towards continuing the purchases for long periods of time. Rate hikes will not be seen yet in 2023.

Russia could compensate only partly for the decline in energy exports to the EU by boosting trade with e.g. China and India 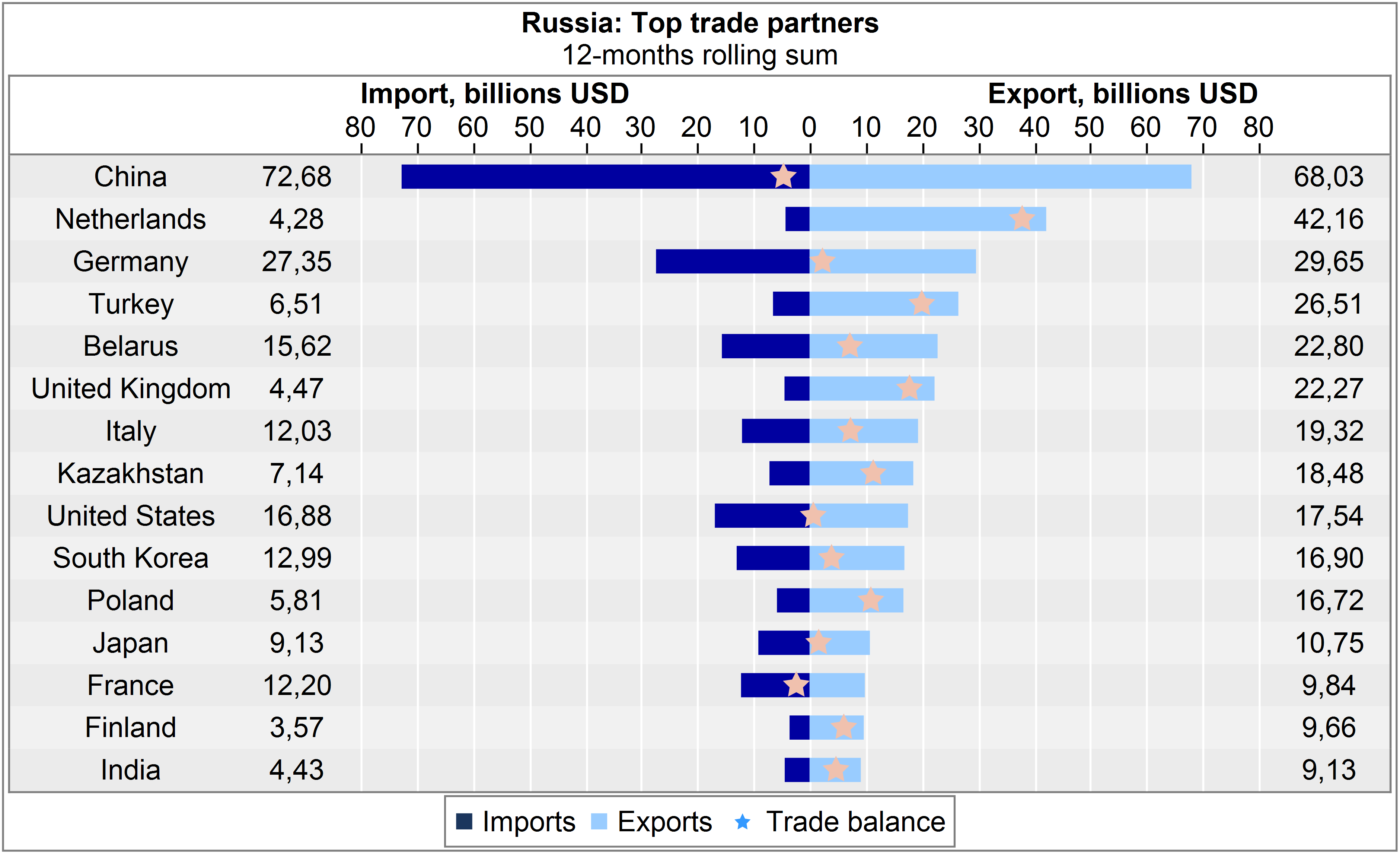 While it may not necessarily be Putin signing such a contract with Ukraine, such a deal would end at least the heaviest sanctions and bring Russia back to the global economy.

The current risk premia on energy prices will recede and prices will fall from current levels slightly faster than implied by current futures prices.

Russian economy would suffer even in this case due to the high level of economic uncertainty that would continue to prevail and limit the recovery of fixed asset investments, both domestic and foreign. However, stability of public finances would be guaranteed and losses to GDP would be limited. RUB would recover from the current levels but inflation would remain elevated allowing the central bank to take interest rates lower from the current levels but not to the levels seen prior to the crisis.

Euro-area economy would be hit only marginally in the short-term due to reduced business with Russia. In the medium-term, increases in investments targeting to reach higher self-sufficiency in the energy sector and stronger defence capacity would contribute positively to growth but also lead to higher public deficits and debt.

Euro-area inflation would remain at elevated levels due to the base effects from energy for a few more months but would then return close to our baseline forecast.

The ECB sees the broader economic impact of the war as short-lived and modest, and retains its policy normalization plans amidst gradually mounting underlying inflation pressures. Net bond purchases will end in Q3 and rate hikes will start in the second half of this year. The ECB deposit rate will rise to positive territory in 2023. 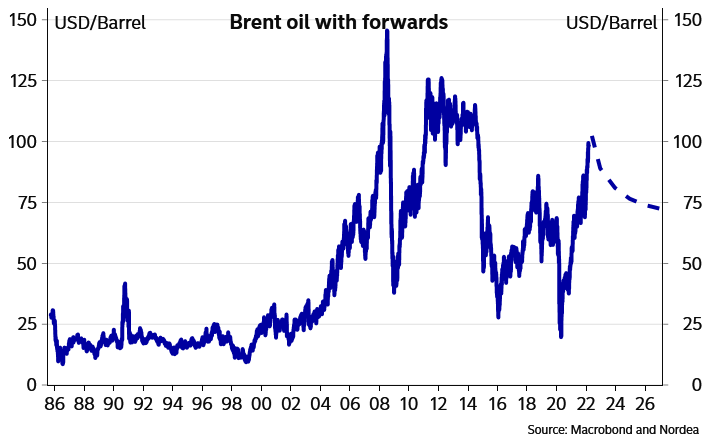 Ukraine crisis over before it begins?