The new virus variant has added yet more uncertainty to the global economy, but that has not stopped the Fed from signalling faster tapering ahead. Meanwhile, Euro-area inflation continues to surge even further above the ECB’s forecasts.

Financial markets suffered another bout of uncertainty as a new variant of the SARS-CoV-2, called Omicron, wreaked havoc. The variant is surrounded by a lot of uncertainty, but its quick spread in South Africa has raised fears that it could be the most dangerous variant yet.

This week, comments from Moderna’s CEO that current vaccines were likely to be materially less effective against the Omicron caused worries, while the head of BioNTech suggested that the fully vaccinated still enjoyed high protection against a severe disease from the new strain.

Another crucial question is how severe a form of COVID-19 the new variant causes. Early evidence from South Africa suggests the total number of people hospitalised because of the new strain has not risen faster than in previous waves, but more information is needed for firmer conclusions.

The new strain emerged at a time when many European countries were already implementing or planning stricter restriction measures to prevent the Delta variant from threatening hospital capacity.

It is clear that new restrictions will act as a brake for the economy in the coming months, but the severity and duration of the hit remain very uncertain. Some reassurance can be taken by looking at how economic confidence has reacted to past waves of COVID-19 infections: the sensitivity of confidence has clearly fallen compared to the first few waves. That is naturally of limited consolation if the current wave proves to be the most severe yet, but suggests that until we know more, there is little reason to panic either.

Chart 1. Recent COVID-19 waves have not delivered any major blows to economic sentiment 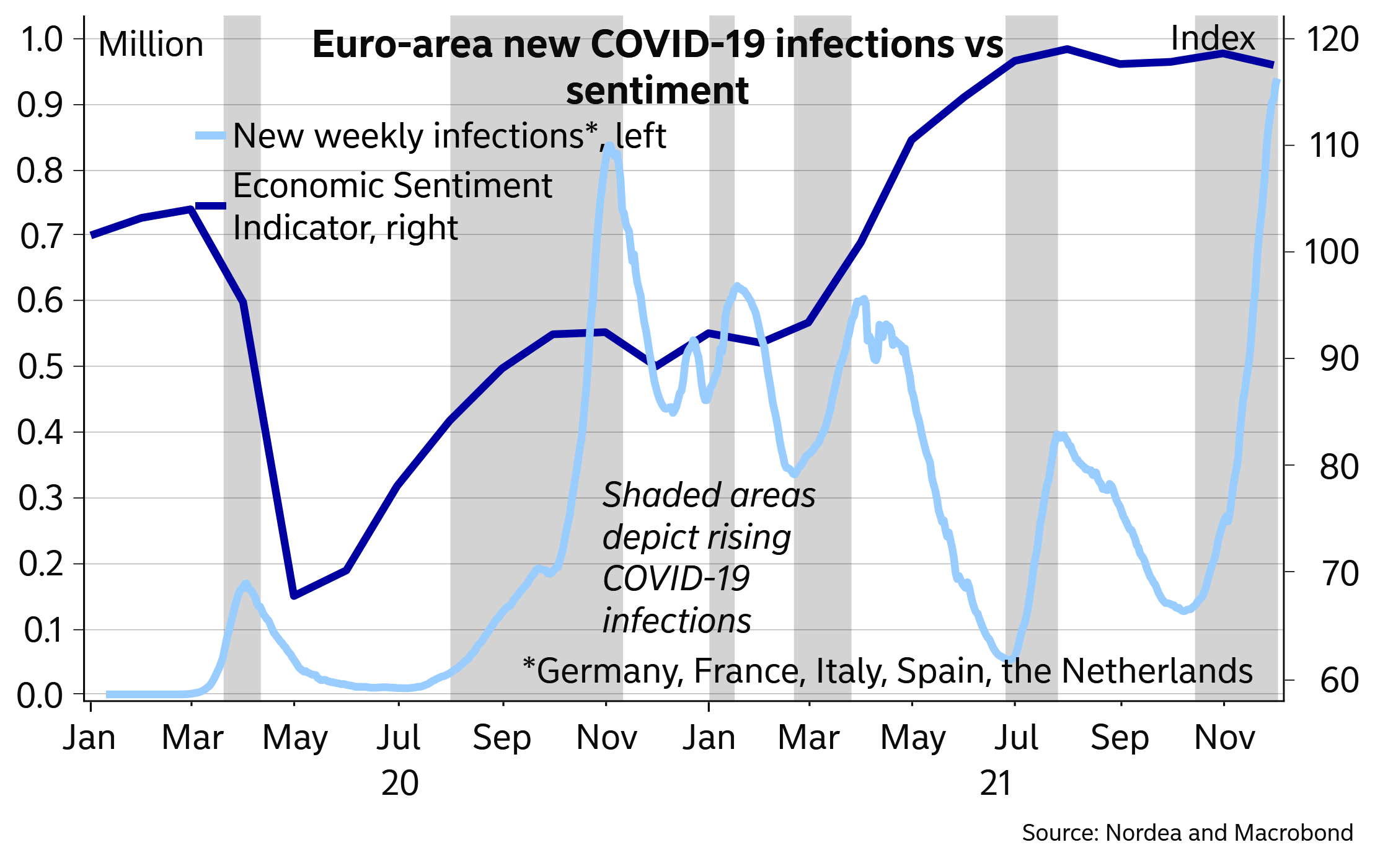 The recent market moves also need to be put into perspective. While many news headlines have sounded quite dramatic, in the big picture, financial markets have not moved that much. For example, the S&P 500 equity index has fallen by less than 5% from its recent record high.

Chart 2. One should not overplay the scale of the recent market moves 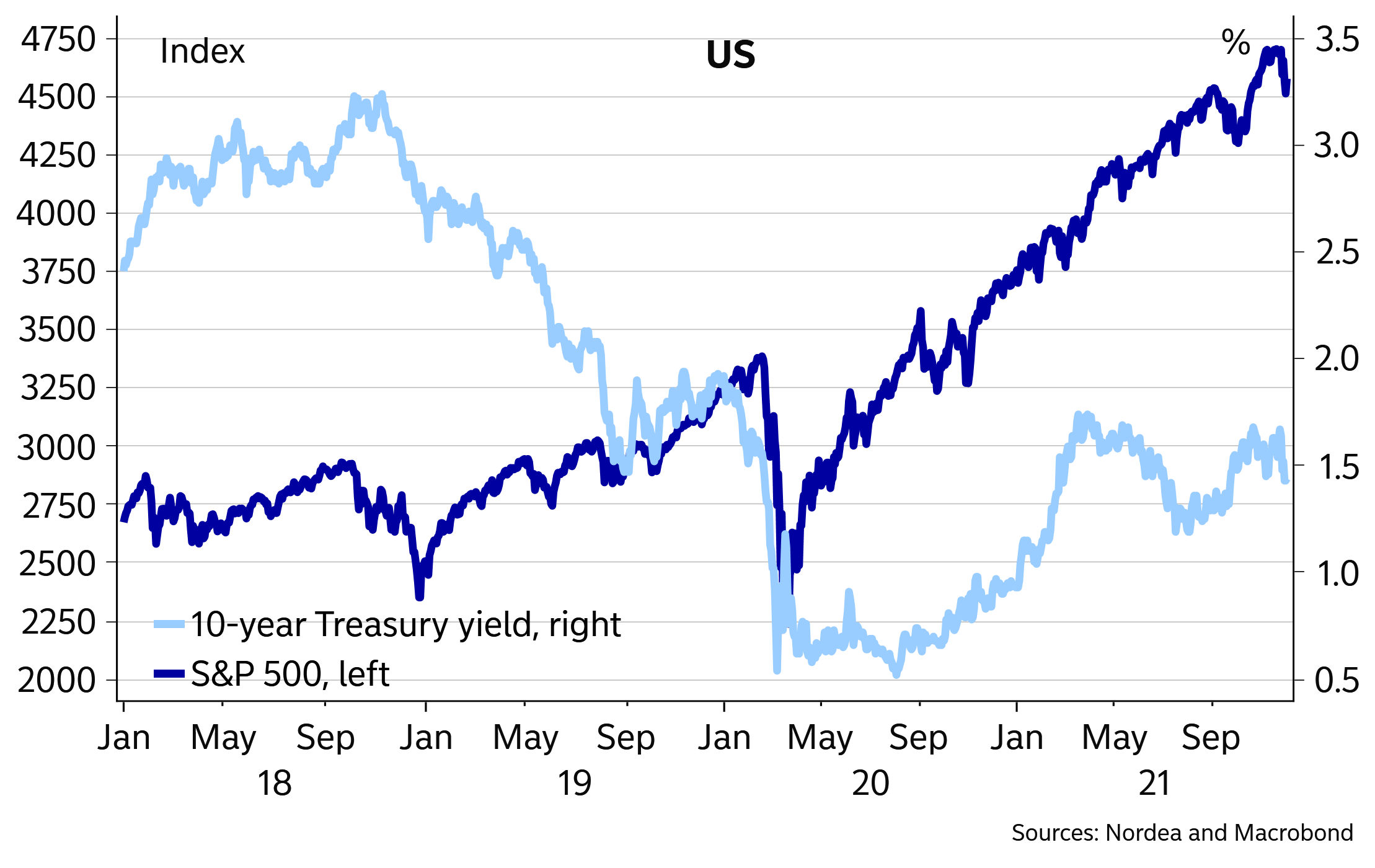 A new COVID-19 wave also impacts economies and countries in different ways. The zero-Covid strategy in use in e.g. China means that if infections rise there, new restrictions and the resulting hit to activity will be sizable. Also Euro-area countries in general seem readier to implement new restrictions compared to the US, although there are some differences in the US by state.

The impact of a new wave of infections on inflation is not straightforward either. On the one hand, added uncertainty and economic restrictions will continue to support the demand for goods vs services, which in turn will keep global supply chains strained and maintain the inflation pressures stemming from shortages of many goods. On the other hand, the restrictions will dampen activity and with that especially price pressures in the service sector.

In the US, where inflation pressures are clearly already more widespread, the net impact of the newest COVID-19 wave will probably prove to be inflationary rather than disinflationary, at least to a point, while the opposite is more likely to be the case in the Euro area.

On the central bank front, Fed Chair Powell decided finally that it was time to stop talking about high US inflation being transitory. However, he further clarified that this was because the word carried different meaning to different people. The Fed used the word to mean that the current conditions would not leave a permanent mark in the form of higher inflation. Powell characterised the economy as being strong and inflation pressures high.

Powell reinforced the hawkish message by saying it was appropriate to consider wrapping up net asset purchases a few months sooner, supporting our call of the first Fed hike taking place as early as next June. The timing of his hawkish comments was interesting, and suggests that the Fed is more concerned about the inflationary consequences of the latest virus developments than their impact on growth. 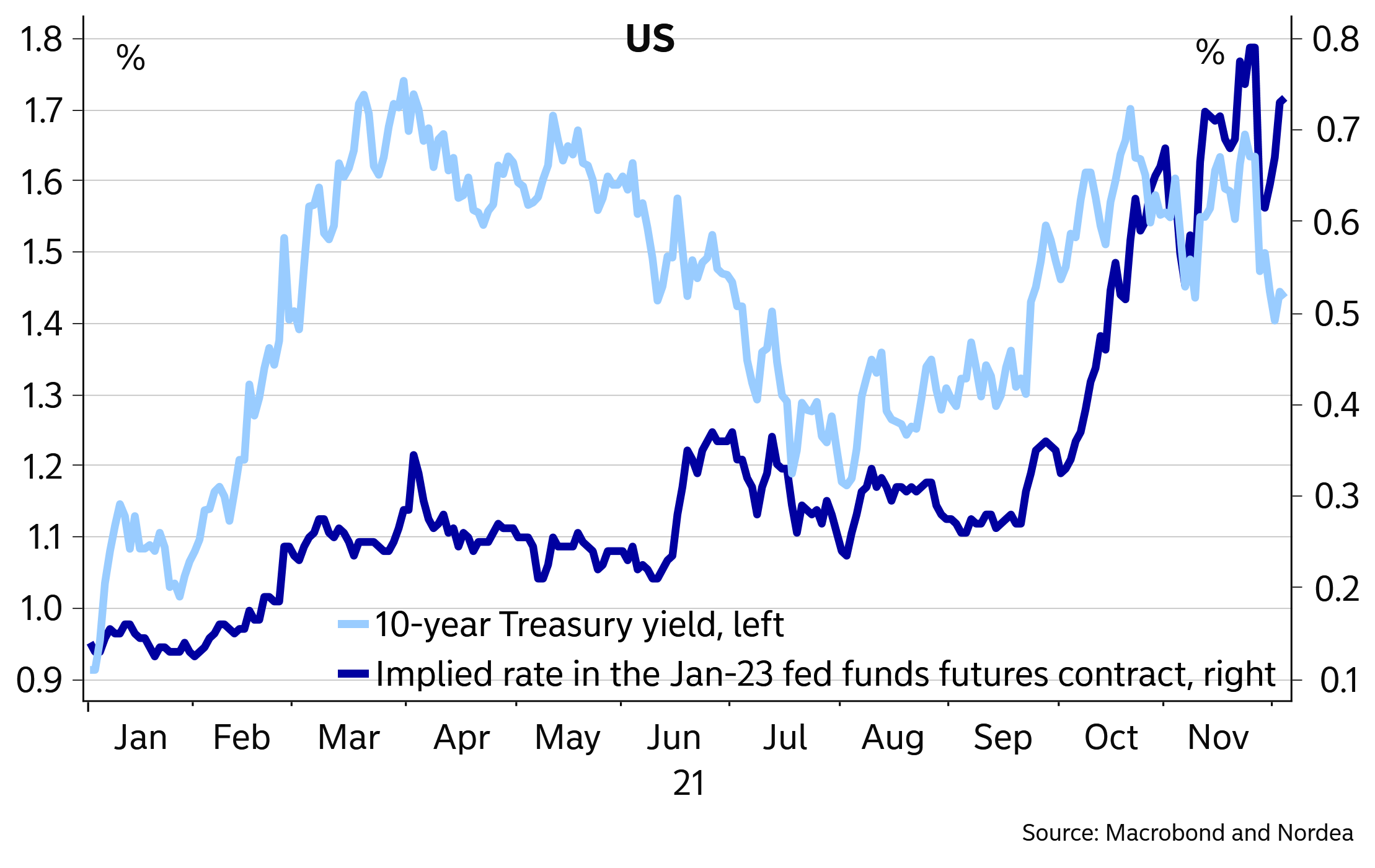 One big takeaway for us from Powell’s remarks is that he admitted that the Fed was wrong to assume that the participation rate would recover during the autumn. The recovery is yet to happen and to us this signals that the Fed is changing its perception of the labour market recovery. Quoting Powell: “to get back to the kind of great labor market we had before the pandemic, we are going to need a long expansion (…) and to get that we are going to need price stability.”

Market pricing on Fed rate hikes rebounded after Powell’s comments, but remains below the pre-Omicron levels and below the three hikes we expect to see from the Fed next year. We also note that despite the clearly higher pricing of Fed hikes in the short end of the curve, the longer end of the curve has failed to rise above the highs seen earlier this year, further indicating that there are also structural factors preventing longer yields from reaching much higher levels.

Even though virus developments will likely keep volatility elevated, we continue to see flatter 5s30s and a stronger USD ahead.

Chart 4. The trend of flatter curves and stronger USD is still alive in the bigger picture 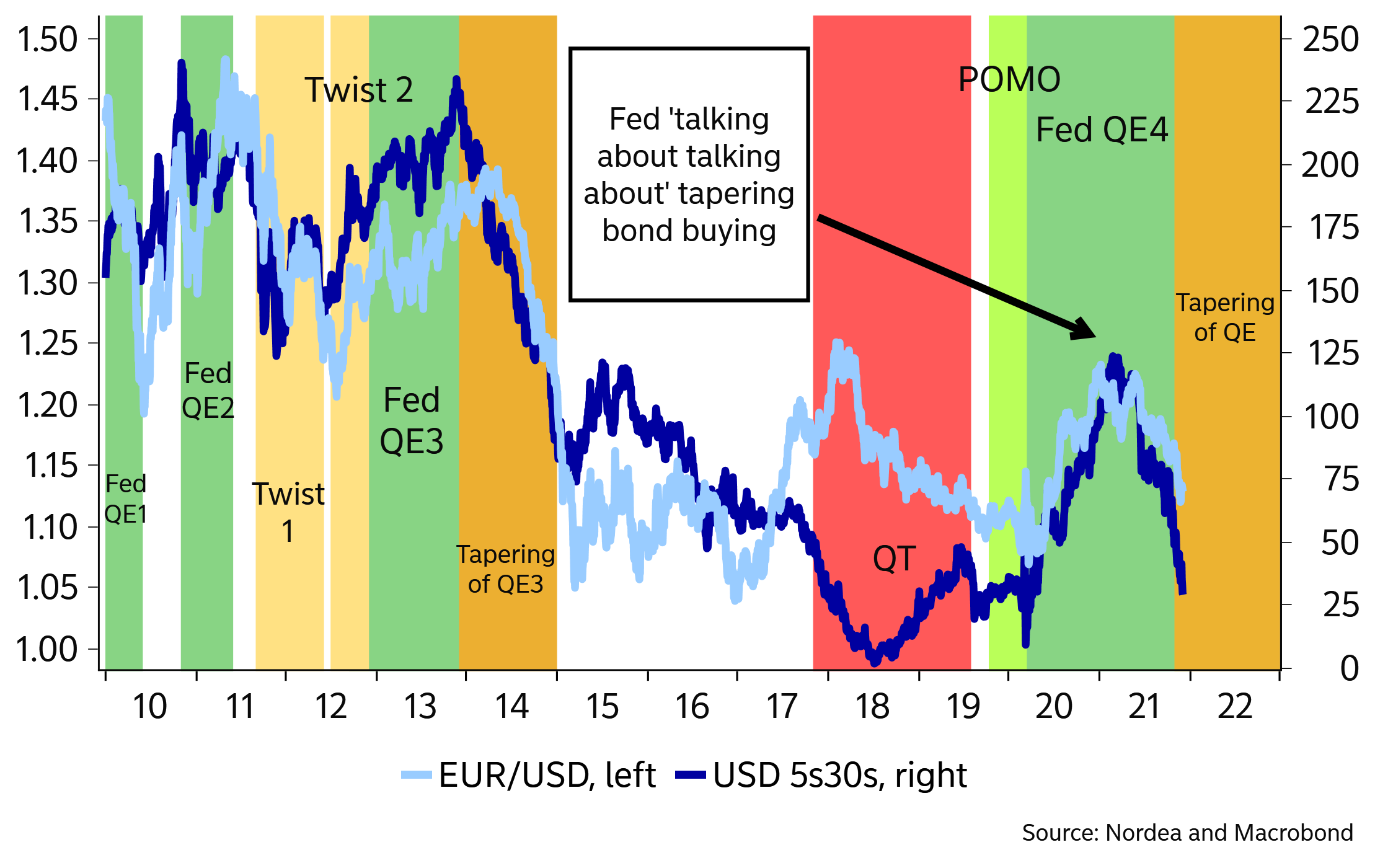 Meanwhile, upside inflation surprises continued in the Euro area as well. Headline inflation surged to 4.9%, while also core inflation jumped to 2.6%. In Germany, inflation (HICP) hit 6%, a number terrifying many Germans and prompting the incoming chancellor Scholz to declare that something must be done, if inflation does not come down. More than half of the Euro-area number is accounted by surged energy prices, so it is hard to argue that at least that part of inflation would be persistent. Further, last year’s German VAT cut will not lift the y/y numbers further after December.

Broader signs of high inflation spilling over to wages, or so-called second round effects, are still absent. However, the longer inflation stays elevated, the bigger the risk that it spills over to wages, especially as not all sectors have as much spare capacity than suggested by the broad labour market numbers.

The ECB has continually understated inflation developments this year, and at least before the recent intensification of the virus situation, the December meeting was set to become a tug of war between the more dovish and more hawkish members of the Governing Council. Recent developments may give the doves the upper hand, and in the bigger picture it looks clear that the ECB will only take baby steps away from its exceptional monetary easing measures.

While upside inflation risks have risen in the Euro area as well, such risks are unlikely to feature strongly in near-term market action amidst elevated COVID-19 uncertainty. 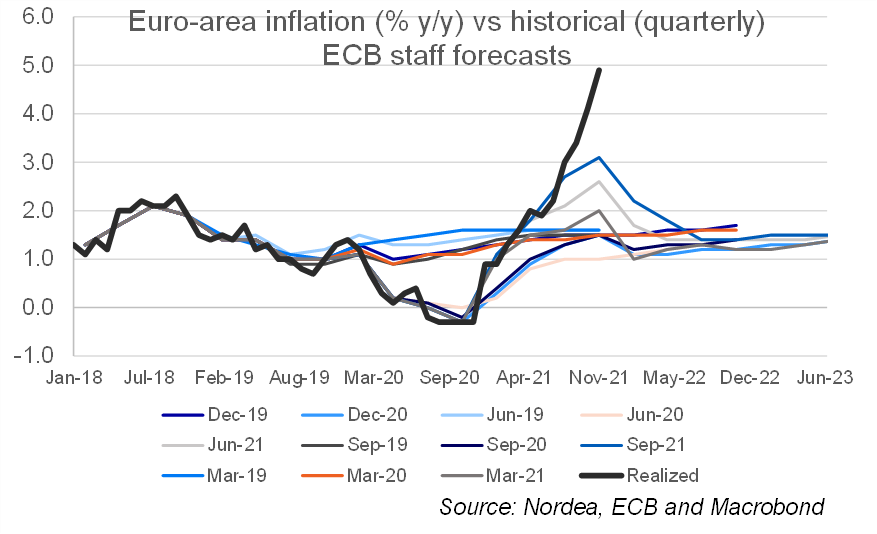 EUR/USD bounced but not because of the high Euro-area inflation reading, and it is also unusual to see the euro rise when risk aversion hits the global markets. But the explanation is simple. The euro was the weak link for weeks and used as a funding currency.

However, the Omicron variant has revived shaky markets and investors closed/reduced their risky positions. Hence, buying back the euro. But this pattern is unlikely to last for long unless the coronavirus situation worsens. The dollar should regain the upper hand as soon as the focus returns to economics and central banks.

US rate hike expectations have firmed after the recent hawkish comments from Fed Chair Powell and this will be supporting the dollar ahead of the Fed and ECB meetings later this month. Thus, we expect the interest rate differential to continue to be instrumental for a renewed move down in EUR/USD. 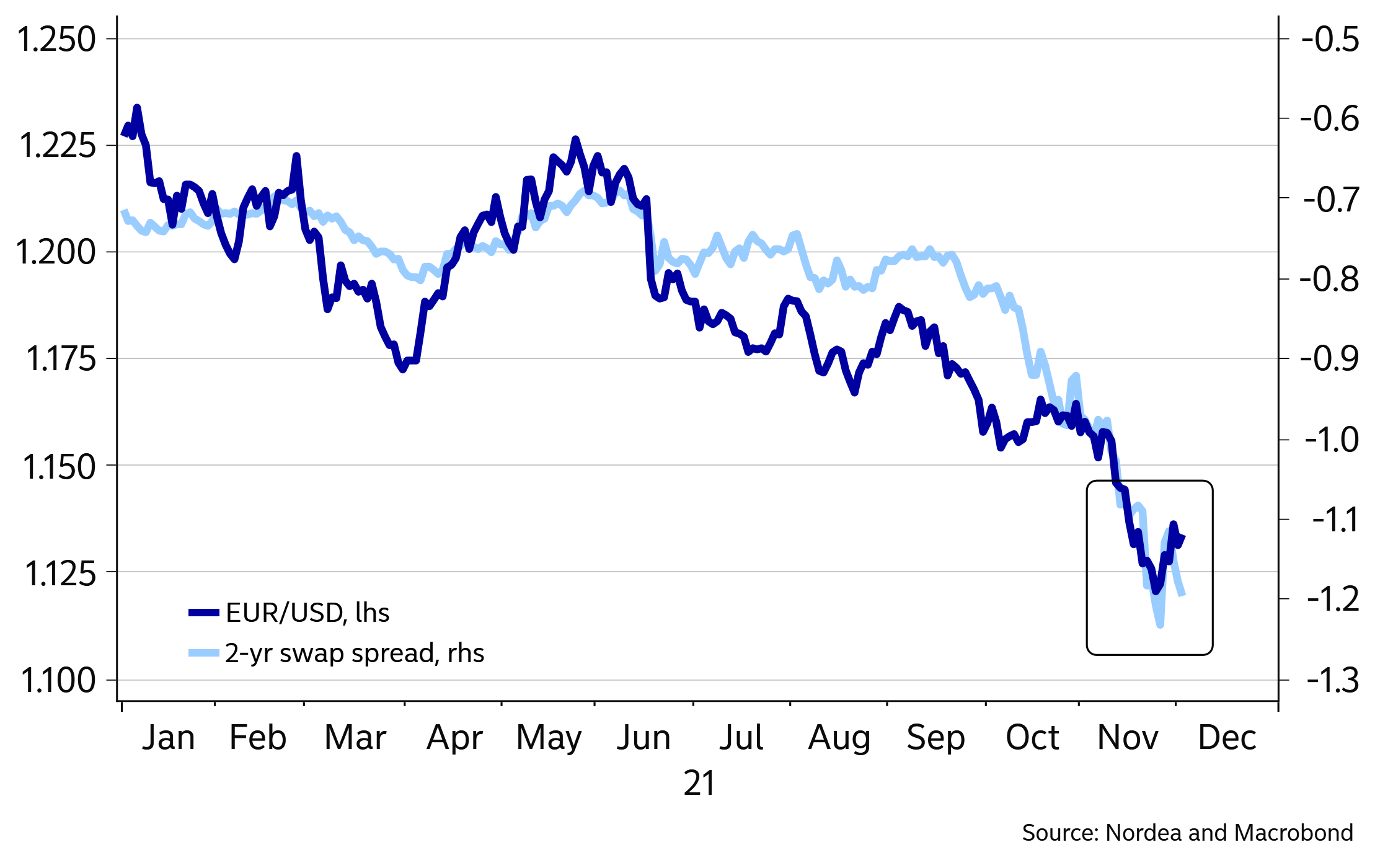 A really mixed end to the trading week with Asian

Australian dollar humbled by return of the king

DXY is back and it's bad. EUR is sick: AUD

The selloff from overnight markets has proven

US dollar to the moon!