First, as the pandemic unfolds, you tell your population to hug Chinese people and call limiting international flights “xenophobic”. Soon thereafter, the media coverage of the virus scares the population so they stay indoors. And if they don’t, you lock them down. (In the US, Democrat voters believe it’s a 1-in-3 risk of hospitalisation from COVID-19 vs the actual risk of < 1%, according to a survey from September 2021.)

Now the composition of demand has changed towards goods and away from services, which drives inflation due to component shortages, increased energy consumption, supply chain bottlenecks – on top of goods prices being more variable… 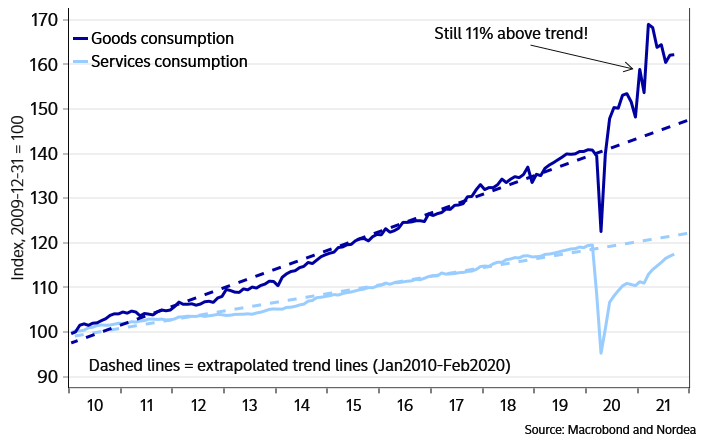 Your lockdowns and travel bans soon limit global and national labour market mobility, which drives inflation. Then you pay bonus benefits so that a substantial amount of wage earners get paid more to sit at home watching Netflix than if they were actually going to work. This further increases labour scarcity and drives inflation.

And if that wasn’t enough, you close schools and primary care centres, and in some places you don’t close instead you implement mask requirements and social distancing – in some places even for toddlers – which further increases labour scarcity. It should come as no surprise that home schooling in the US has (reportedly) doubled since 2019.

Chart 2: US Beveridge curve has shifted to the right – indicating higher NAIRU 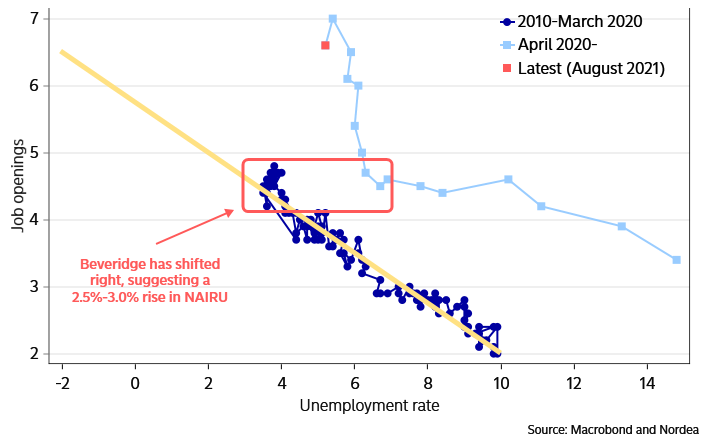 By now you have managed to make it look like the equilibrium rate of unemployment (NAIRU) has risen by 2.5-3.0 percentage points since before the pandemic. This meaning implies higher sustained inflation rates from a specific unemployment rate.

But you are not quite satisfied. The vaccines which you developed were never designed to prevent transmission. Global health care czar Bill Gates recently admitted that “[the vaccines] only slightly reduce the transmission” and a recent paper shows no difference in “viral load” between vaccinated and unvaccinated.

Still, this does not prevent you from talking about a “pandemic of the unvaccinated” (though “completely false” according to “Germany’s Fauci”), from implementing vaccine passports (which you were planning well before the pandemic) or vaccine mandates (because who needs so many police men, truckers or nurses?). One also, almost, wonders how a “corona- pass” can “give you peace of mind” if vaccines do not prevent transmission, but that is a question best asked of politicians – perhaps Danish ones.

The effects from your actions are forseeable – you’ll get even worse labour scarcity, which drives inflation (and, as a likely bonus, less hospital capacity which could lead to worse health outcomes). 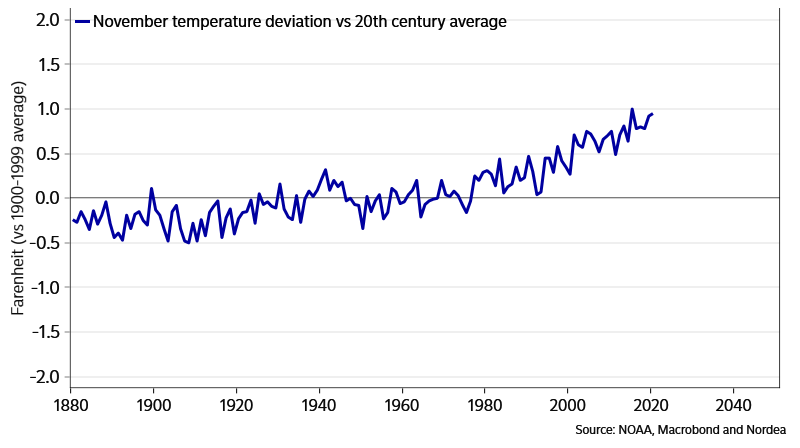 In the meantime, to reduce climate change – or to get a manageable 1.5% rise in temperature instead of the horrific 2% rise, you reduce supply of cheap brown energy instead of e.g. building climate-friendly nuclear plants and planting trees to bind carbon.

You are doing this while your infrastructure is still dependent on brown energy. This is inflationary and has helped contribute to the current energy crisis. This past week, Riksbank’s Governor Ingves argued that ESG-induced inflation may not matter for monetary policy – perhaps it could start targetting inflation ex. “greenflation”? This would also be inflationary (in practice).

But now you have, however, started to figure a few things out, and you ask the industry which you have been trying to regulate to death to increase their output, but they – for some reason – seem hesitant. Did we mention you shut down one of their pipelines? 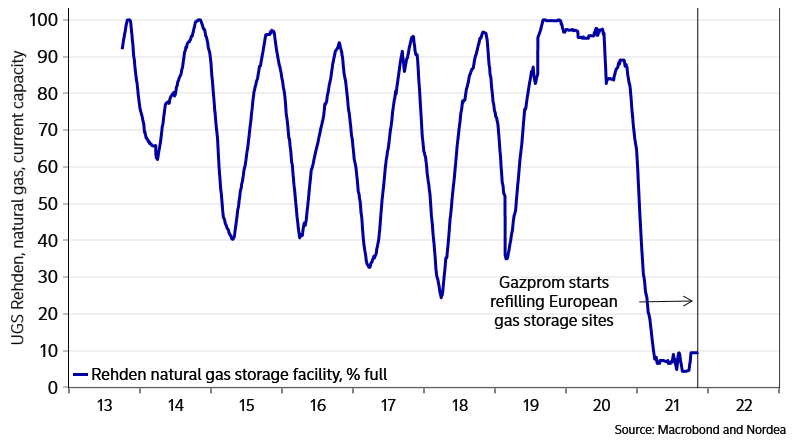 By doing the above you have also given the keys to your kingdom to your main geopolitical rival, who is now “holding you by the energy supply”, and its minion is threatening to cut gas transit if you try sanctions. Your other geopolitical rival is producing and burning coal like a madman (while going nuclear – planning 150 new reactors over the next decade).

Chart 5: Fertilizer prices have gone ballistic, a rise in food insecurity may follow 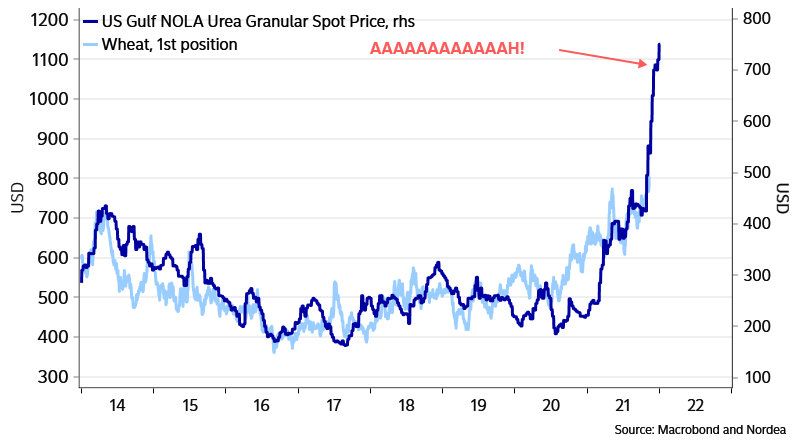 The price of fertilisers has also “suddenly” gone ballistic as a result of surging natural gas prices – the energy crisis you helped orchestrate. Higher food prices will likely follow. While Davos Man won’t feel the pain from rising food prices – if he can afford a private jet, he can continue to afford wagyu steaks, but the less well-off will be negatively affected.

Food insecurity and a rise in political risks across low-income countries will follow. An EU draft recently proposed exempting private jets from new jet fuel taxes, and yet you cannot understand why populism has been on the rise.

You have now also started to realise that having ultra-efficient global supply chains which are highly dependent on your geopolitical rivals may not be a good idea after all. Fukuyama’s idea of an “End of History” was dead and buried by 2007, but you failed to notice.

You have belatedly decided to try to reverse some of the damage done and to try onshoring instead. This reduces complexity, efficiency, drive inflation and lower real living standards – but again mostly for the less well off, who you think should be eating bugs anyway. 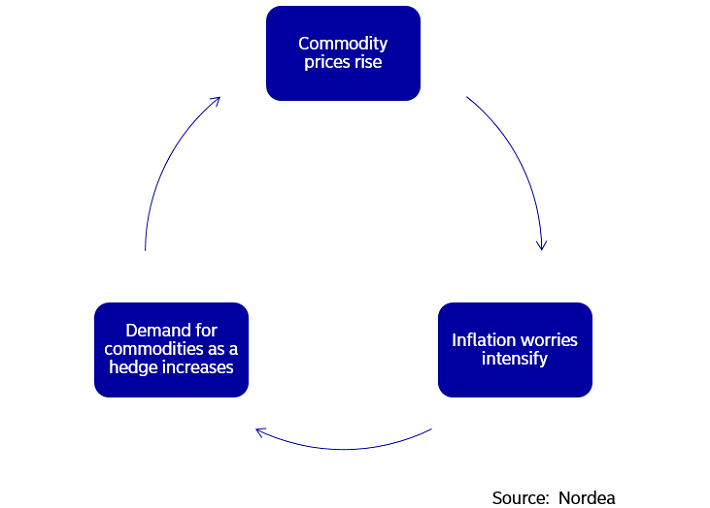 You also in recent years decided to let not only hedge funds but also retail accounts speculate in all kinds of assets, such as physical copper or why not uranium, the later of which became possible this summer. This likely fuels inflation even further, at least for a while. 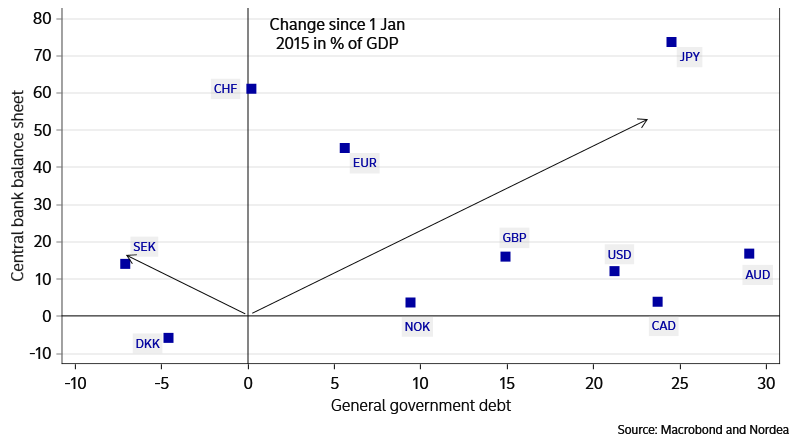 And in the middle of it all, you have central banks which, after having undershot inflation targets for years, have implemented average inflation targetting regimes and zero rates while printing money – and lots of it. Money which in some jurisdictions goes directly into the hands of households via fiscal spending – a de facto, if not a e jure, (inflationary) monetisation of deficits. 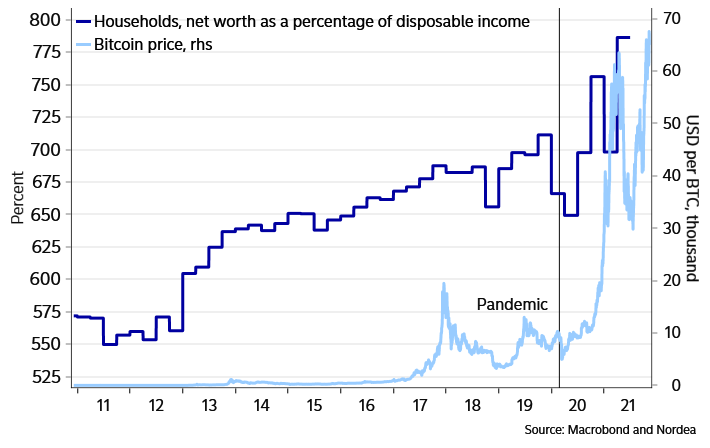 The asset price boom orchestrated by central banks is also reducing labour supply. Not only has retirements been surging lately – the Fed is talking of perhaps three million “excess retirements” in part because of higher asset prices. But there’s also the F.I.R.E. movement (Financial Independence, Retire Early). One poll indicated that 4% of those surveyed had quit their jobs after crypto investing (we would guess the true number is much lower, but some effect may be in play).

Without an end to the pandemic, and without a surge in labour supply, inflation pressures seem unlikely to fully “normalise”. And right now, virus fears are more likely to climb than to fall (more on that below). Team Biden’s new vaccination deadline on 4 January might even further worsen labour shortages (unless stopped by the judiciary) and the effects from which may well show up in another rightward, inflationary shift to the Beveridge curve in the first quarter of next year. Elsewhere, deglobalisation, onshoring, and #greenflation are trends unlikely to end.

As readers of Week Ahead and the Nordea Weekly will suspect by now, we continue to lean towards higher inflation prints than generally expected – or perhaps we should simply call it dumbflation instead?