Autumn has clearly arrived. It’s getting colder. Maybe that’s starting to be true also for markets. The past week brought with it the first lower lows in S&P 500 since the bottom in March 2020. Equity volatility has behaved strangely since May with spikes around VIX expiry every month. And beneath that spiky pattern, a slightly upward tilting trend can be detected for VIX futures. At the same time bond yields are shaking off risk-off jitters and are climbing higher. What’s up? Let’s start with volatility.

To us there are several macro reasons to believe in noisier equity markets in 2022 than so far in 2021. That doesn’t necessarily mean that equities should register a drop over the full year, but volatility has a good chance of a comeback.

Firstly, the liquidity backdrop is changing for the worse. Central banks are no longer printing money as furiously as before. At the same time the real economy has gotten stronger and is sucking up a larger part of the available liquidity. This means that “excess” liquidity has started to shrink on the margin leaving less money to drive asset valuations. In equity market terms, periods like these have meant P/E contractions. And during P/E contractions volatility tends to be higher. 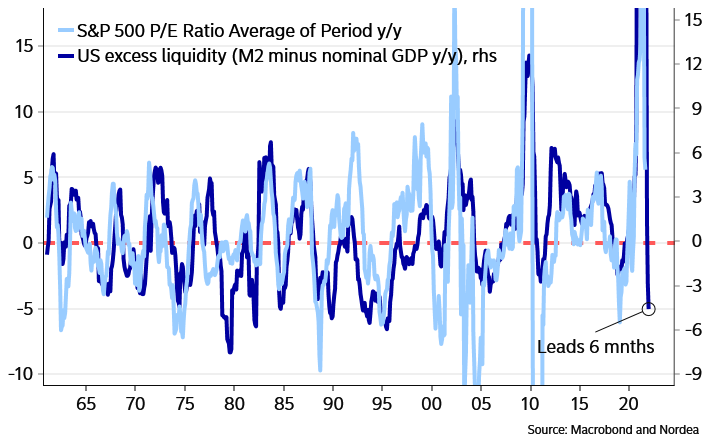 The Fed is also quickly moving closer to a tapering decision, which now sounds almost as a done deal for November. The previous three episodes of QE tapering have all gone hand in hand with rising volatility. Our scenario with Fed rate hikes in the second half of 2022 would add to those volatility risks. 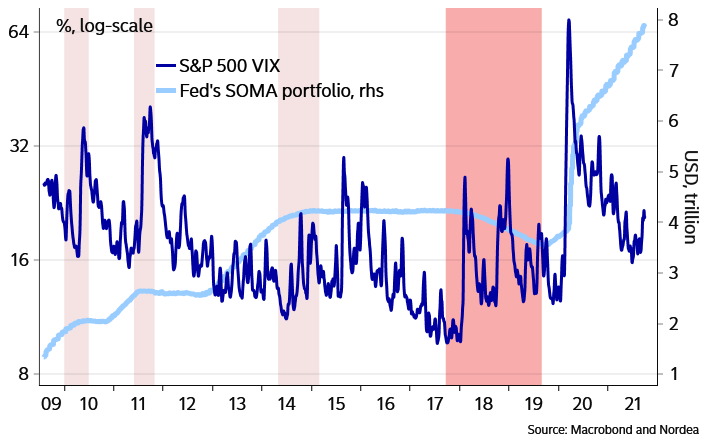 Moreover, over the past month we have pointed to very weak credit impulse data in G3. Admittedly, the impulse measures the change of the change of the credit stock so it’s not always easy to figure out what a slumping credit impulse actually means. But since it has worked very well as a leading indicator of both the equity market and the global business cycle since the financial crisis, it is yet another factor that could scare investors, leading to higher volatility.

Chart 4. A rockier equity market road ahead according to the credit impulse 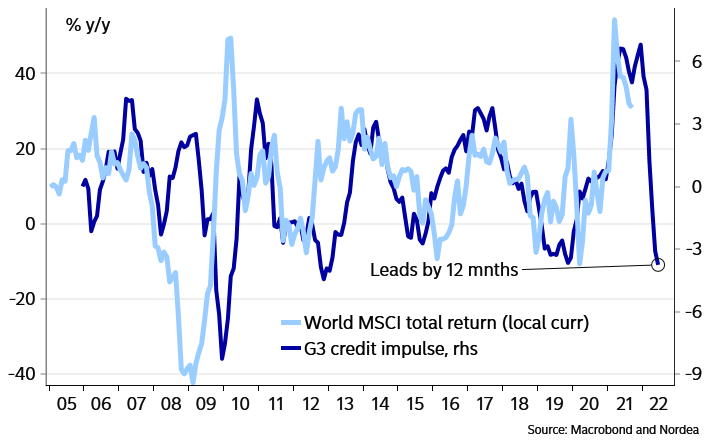 Secondly, while on the subject of the global business cycle, it’s obvious that economic growth rates will decelerate in 2022, possibly after a re-opening push higher in Q4. Some of our leading PMI indicators have dropped quite extensively lately. We still believe that the actual slowdown will be less severe, particularly since labour market demand remains extremely strong. But the current supply disruptions plus component and electricity shortages could force through a short-term more negative scenario. Down the line there is moreover a fiscal cliff looming when current fiscal policy support measures are retired. 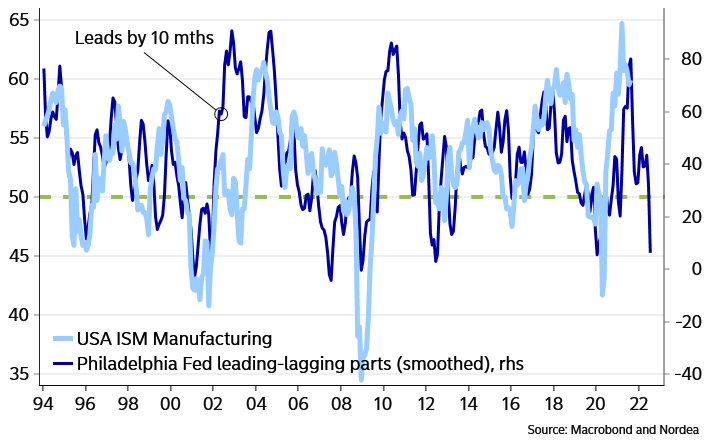 Also, there is a price surge on several “key” household items particularly in the US that we basically never have seen before. How that will play out in terms of consumer spending is very unclear and there is a record high share, with a wide margin, of households claiming high prices make it a bad time to buy capital goods. This could be an underestimated reason for the drop in consumer confidence.

Chart 6. Who would have guessed that inflation makes people less likely to buy stuff? 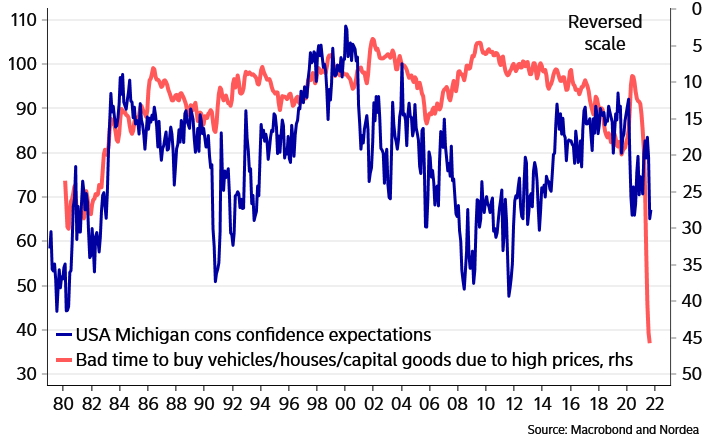 Since no one will know how bad the slowdown will become, it will definitely invite more pessimistic commentators than us to the table. Historically, periods with decelerating growth has correlated with higher volatility.

Thirdly, decelerating economic growth of course also means lower top line growth when it comes to profit developments. With slower profit growth the margin of error gets smaller and particularly so when liquidity trends spell P/E contraction. Turning from margin of error to profit margins makes the puzzle even more difficult. Costs are rising on basically all fronts: oil/commodity prices, freight rates, input components and, maybe for 2022 most importantly, cost of labour. Already very elevated labour shortages and an ongoing capex surge also point to a probable short-term productivity slump in 2022. 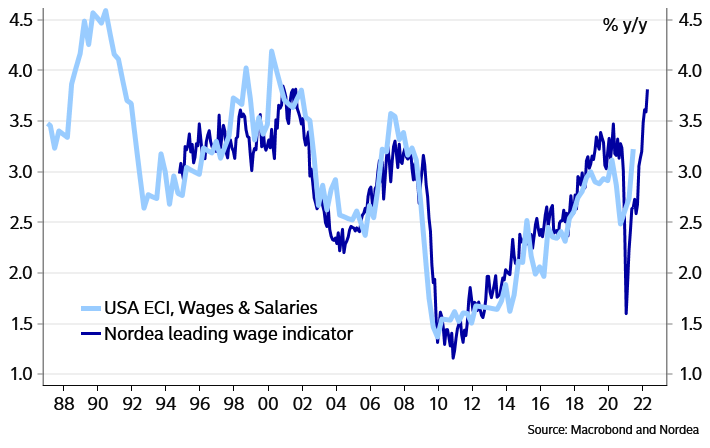 We have constructed a simple profit margin “warning” indicator that consists of NFIB small business optimism in the US minus planned wage increases. It’s clearly flashing red. Despite this, S&P 500 profit margins are expected to rise. That makes very little sense to us. Earnings revision momentum, which has been formidably strong in 2021, is probably already very close to turning negative in some geographical areas, such as Europe. Did I hear volatility? 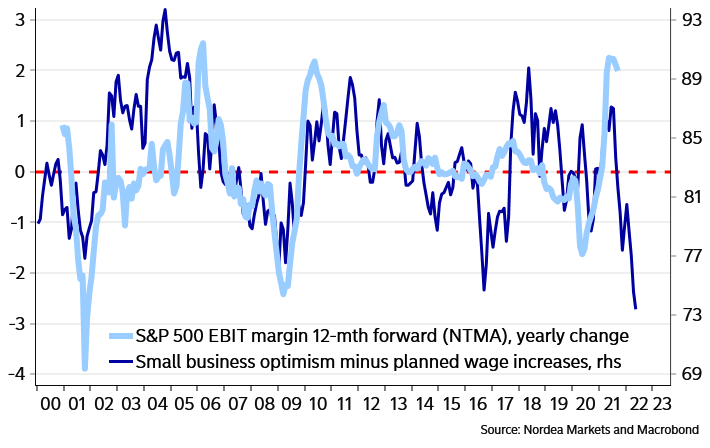 Naturally, companies will counteract this suspected margin squeeze by trying to raise prices. It could very well be that a lot of them will succeed in this, which brings us to our final volatility argument. Fourthly, is there a Fed put if inflation turns out to be more persistent?

Fed bailouts of purely financial market jitters have been a fact quite a long time. The most recent experience was in Q4 2018 when there basically were no convincing economic reasons for the Fed to turn policy around. But when equity prices corrected 20%, after having rallied massively since 2015, Chairman Powell seemed to become very scared and initiated subsequent rate cuts in 2019.

General wisdom seems to be that the Fed put is alive and well, but it has not really been tested during a period with high inflation. It’s much easier for a central bank to react to a 20% drop in equities when inflation is low – the cost of acting is minimal. With high inflation – who knows? And uncertainty spells volatility.

You might ask yourself at this point why we don’t go all in and forecast falling equity markets in 2022? There are two main reasons. The first is that we don’t expect a recession and thereby profits will likely rise, albeit probably not that much. Historically the equity market has never slumped badly when profits rise.

Chart 9. Equities “never” crash when profits are going up 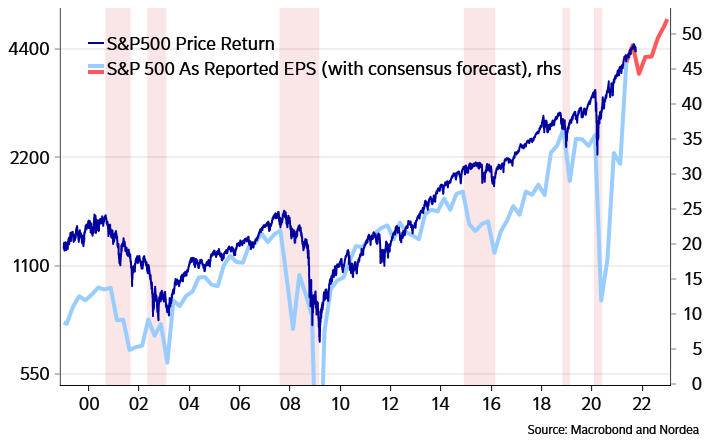 The second reason is that real rates remain very low. The good old TINA (There Is No Alternative) argument is alive and well. In the past, positive real rates have been needed to shake the foundation of rising equity markets. A risk could be the retail growth stock darlings, which should do relatively worse if real rates rise. But even if we believe in higher real rates, we don’t see an explosion to the upside which brings us to the bond market. 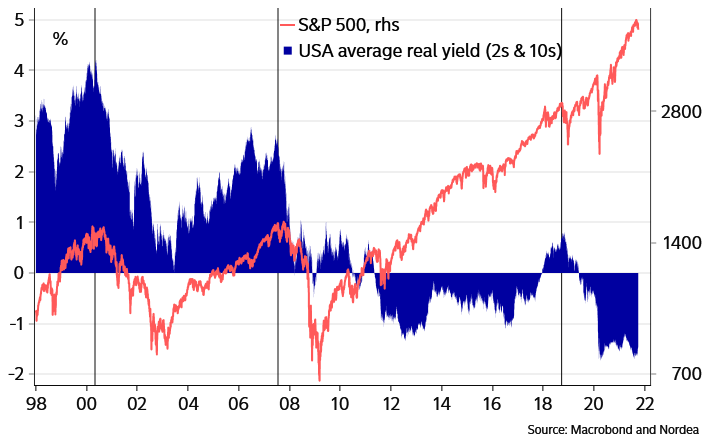 Bond yields turned a corner in early August and have since headed higher. This week saw the US and German 10-year yield push through 1.50% and -0.2%, respectively. In the short-term bond markets have become oversold but the overall macro picture still speaks for higher yields.

Chart 11. Bond yields back to a rising trend, but getting oversold 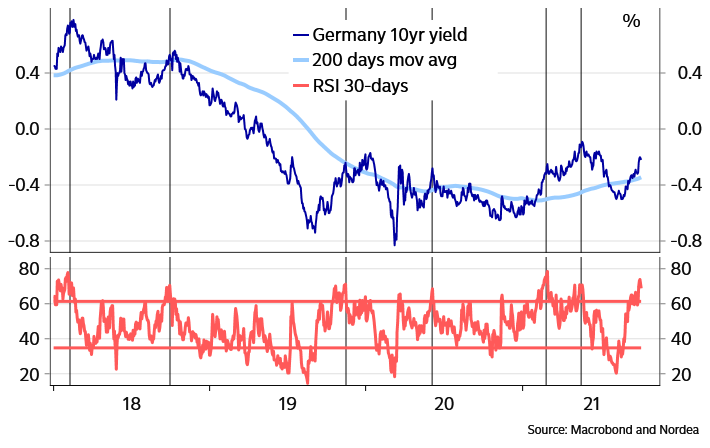 Real rates are way too low compared with where we are in the business cycle, even in a slowdown scenario. Basically they are still at recessionary levels. You could claim that the new backward-looking monetary policy regime will lead to a later rise in real rates than historically because rate hikes will occur at a later stage of the business cycle, when inflation is already a fact. We have long believed that inflation indicators will be more persistent in the coming year than the Fed assumes. At some point we should thus see the Fed pushing real rates up to stave off those inflation tendencies 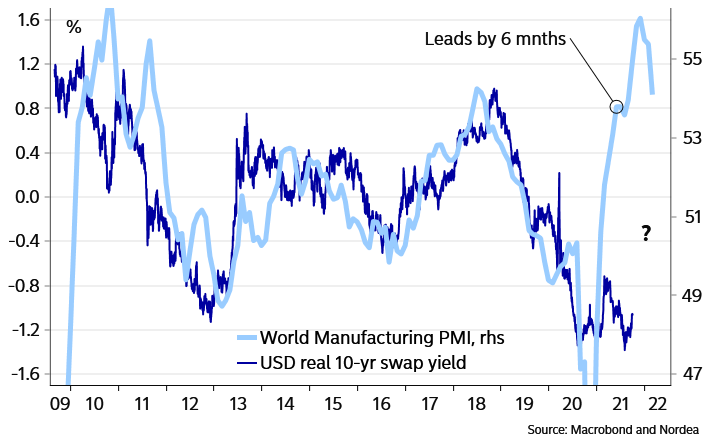 Over the past year we have many times reiterated that we think central banks are underestimating underlying inflation risks. In the US, small businesses’ price plans remain record high, wage cost increases are here to stay, supply disruptions are still prevalent, profit margins are being squeezed and rents should rise markedly over the coming two years. We remain convinced that the Fed for inflation reasons will be forced to turn more hawkish and hike rates in the second half of 2022. 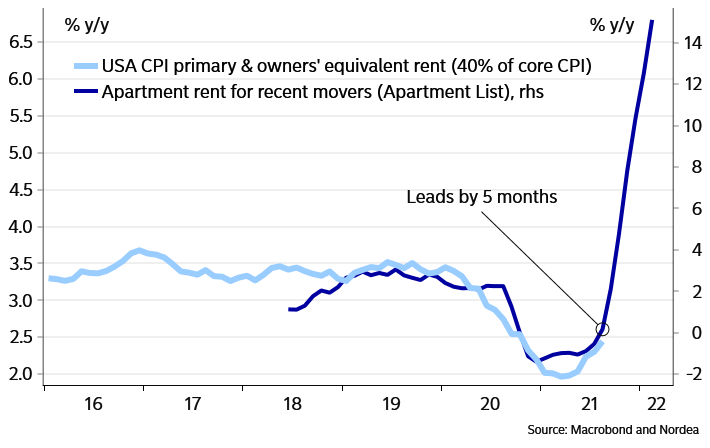 On the more “technical” side, the debt ceiling issues are clearly not solved yet, but soon they basically have to be. When that happens, we will probably see a surge of bond issuance at the same time as the Fed begins to taper purchases. That is a very different situation from Q2/Q3 and rising bond yields recently could be the bond market trying to front-run this. Also, for some reason MBS duration is increasing, which seems a little odd since refinancing activity hasn’t slumped and long-end yields are still below this spring’s level. Nevertheless, increasing MBS duration means a need for MBS traders to hedge by selling fixed income risk. 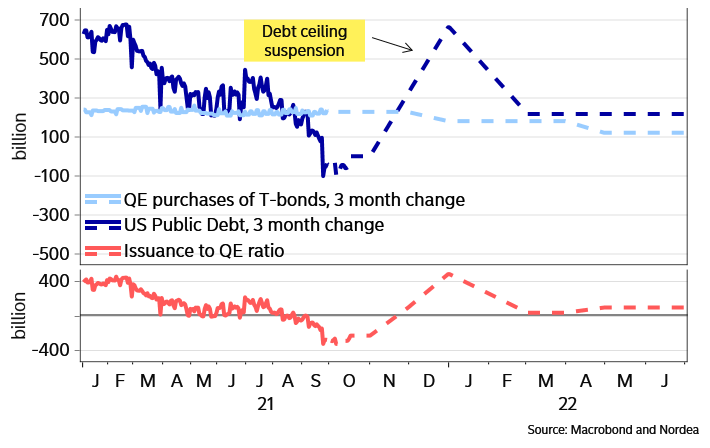 Since February we have argued that the USD would strengthen in 2021 and this week EUR/USD printed below 1.16. The main reason for our forecast of a lower EUR/USD has been relative real rates and the expectation that the Fed will turn relatively more hawkish than the ECB. We see no reason to change that view currently. 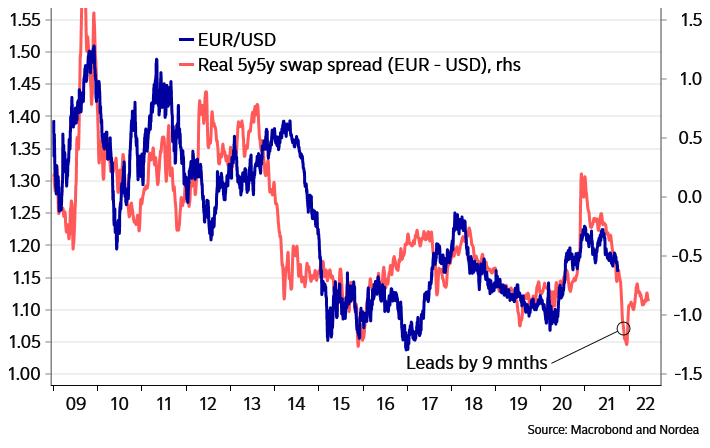 One potential additional trigger has recently been that US data surprises have started to become less negative than in the Euro area. We suspect that this tendency will continue in Q4. Also, slight risk-off tendencies and higher volatility could also favour the USD. 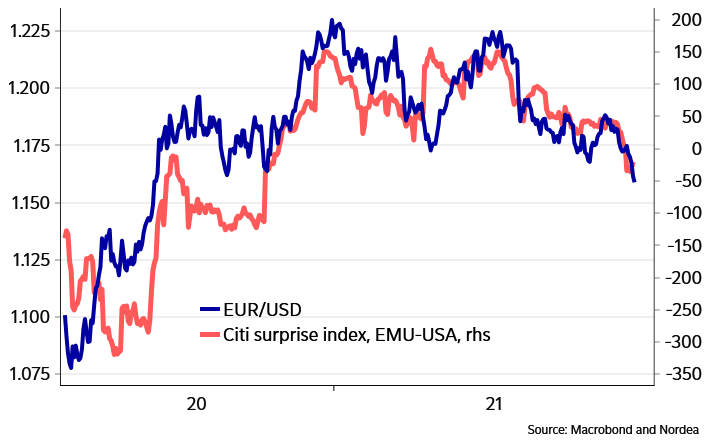 Risk markets are on a knife edge with Asian

How to hedge Ukraine