Researchers from the Mitchell Institute have released interesting data on the state of Australian university finances.

It turns out that university revenues are only down 6% from their pre-pandemic level in 2019. This follows an unbroken run of revenue growth that stretched all the way back to 1995: An extraordinary decade of revenue growth.

Moreover, despite universities continually crying poor, the sector as a whole still generated an operating surplus of $669 million in 2020: If only other sectors of the Australian economy were so lucky.

There is this great myth that the federal government has “cut funding” to universities. While funding growth indeed slowed, it still rose significantly over the decade to 2019: 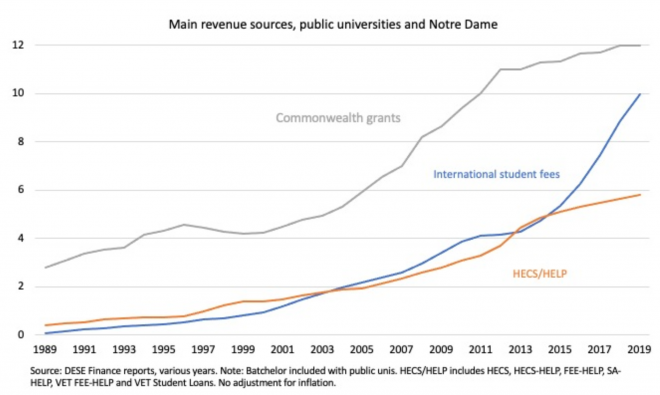 Sharrock shows that public funding for universities grew significantly between 2011 and 2019, alongside the boom in international student revenue: Sharrock concludes that “Australian universities have seen strong growth in public financing for over a decade; and even stronger growth in offshore student revenue until the 2020 disruption”. Perhaps instead of crying poor, Australia’s universities should focus on cutting their bloated bureaucracies and their obscene investments in shiny new buildings?

Their focus should be first and foremost on providing high quality education to Australian students, alongside research that benefits Australia. Not chasing international student dollars and empire building.