We generally had the feeling that the Jay-Man was a dead man walking within the Fed as Lael Brainard’s style and opinions suited the Biden administration much better than Powells, but suddenly it seems less clear that Brainard will take over the reins next year as Janet Yellen allegedly backs Powell. We always thought that the reason why Brainard was not offered the US Treasury Secretary role was, that she was the preferred Fed chair candidate, but it could in turn be that Biden picking a boomer in the US Treasury (Yellen) leads to Biden picking another boomer in the Fed chair role (Powell). Boomers pick boomers! Powell is relative to Brainard a much more hawkish choice, and it will likely postpone the otherwise almost inevitable entry of wokeism in the FOMC decision making by another couple of years.

If Powell stays in the chair-role (our base case), then it increases our conviction in a hawkish shift from the Fed during the autumn due to lagged positive effects in the labor market from the stimulus seen in 2020/2021. It also risks creating a continued QT-like environment with underperformance of the riskiest assets as we have seen recently. And no, markets are not selling off due to Delta. The reason is that the Fed is about to tighten policy when the Credit impulse is already negative.

USD: delta craziness is climbing, but we are upbeat nonetheless

In our recently released forecast update, we hiked our fairly long-standing view of the USD, i.e. now predicting an even stronger USD than previously. In client calls we were then faced with the question what could wrong-foot this view, and came up with the following (shortened) list: i) Delta-strain related shutdowns (which may dent the somewhat-hawkish Fed narrative), ii) a sudden hawkish reversal by the ECB (as the Teutonic forces manage to grab helm of the sustainable Tower of Babel (or *Skytower*), or iii) the end to the US’ equity market outperformance (equity inflows likely underpinning the USD strongly), or iv) renewed focus on the US’ twin deficits (& its empire in decline, post-Afghanistan it should be obvious to everyone). Neither of these drivers however look particularly likely to come into play in the near term, hence our USD-positive views (which we – for good or worse – have had since February).

Chart 2. If relative core inflation prints were to rule, EURUSD would plummet… 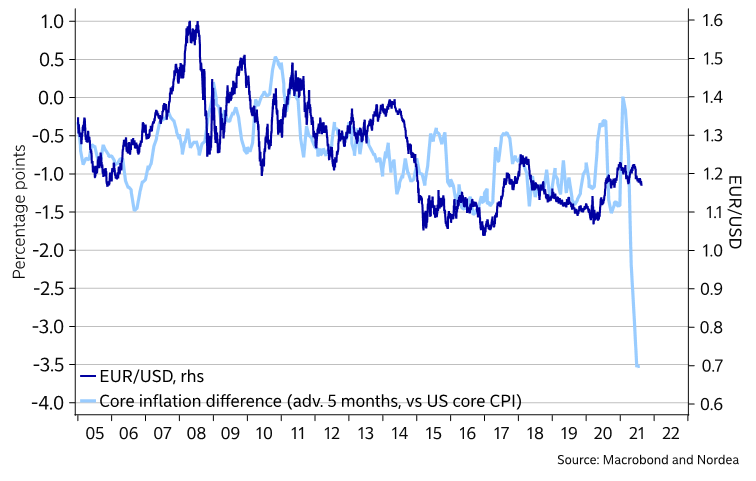 Related to caveat i) above, Robert Kaplan from the FOMC started sounding a bit shakier in his otherwise hawkish tapering view over the past week saying that the Fed would be “watching very carefully over the next month, before the next meeting,  whether it is having a more material impact on slowing demand and slowing GDP growth.”. Even if Kaplan is not a voter, it may hint that the Fed at least needs to debate the rise of Delta internally before Powell and his lieutenants turn too concrete on the actual tapering plan. This is a reason to expect Powell to be almost bizarrely imprecise on the topic at the Jackson Hole conference. The Fixed Income market is in our view still hawkishly positioned for tapering, which may lead to renewed curve flattening and long bond yields that struggle to go higher for now.

Chart 3. Markets are still leaning hawkishly ahead of the Fed tapering decision 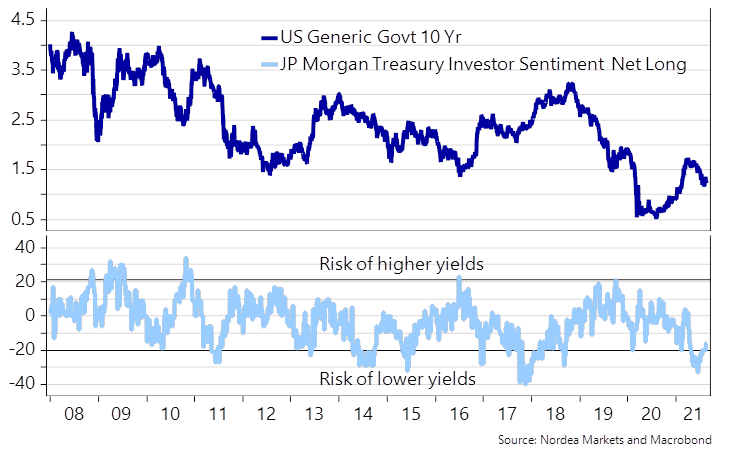 Our best guess is that the FOMC forms a consensus around a data-dependent tapering plan. If all future tapering steps are 100% linked to an upbeat set of data points, then surging Delta-risks during the autumn would automatically lead to a pushback on the tapering agenda. We envisage a tapering process similar to what Bank of Canada has initiated, which means that the FOMC could end up openly communicating unemployment rate thresholds that would trigger the next tapering phase. First, from 120bn to 80bn if unemployment hits 5%, then from 80bn to 40bn if unemployment hits 4,5% and so on.. Levels are obviously debatable, but this is clearly the smartest way to i) form a consensus on the topic within the FOMC and ii) massage the tapering process into markets that are still living on the Covid-edge.

This data-dependent tapering approach would obviously provide Yellen and Biden with the worst possible incentive structure. They simply just need to use the Delta-excuse to reimplement nationwide restrictions, if they want a postponement of tapering. If you were ever in doubt, then just look at what happened in New Zealand over the past week. Postponed rate hikes and short-term nationwide lock-downs due to a very few cases. We book our profit in short AUD/NZD positions before Jacinda Ardern launches the mother of all lockdowns.

Chart 4. A data dependent tapering approach would allow for Delta-concerns to be taken seriously 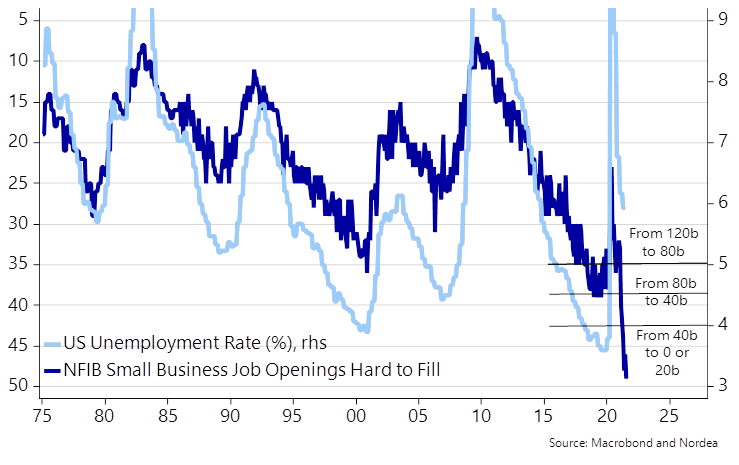 Trump promised the Americans that they would get “tired of winning” during his reign. The question is now when Americans get tired of losing given the recent string of geopolitical defeats for Biden and his administration. China will now be able to transfer oil from Iran via Afghanistan. Russia will now be able to sell natural gas to Europe via NordStream 2. And the US is not even able to convince the OPEC+ to truly increase the production again. Bidens job-approval has been falling of a cliff lately, but it seems as if what is bad for Biden is good for the USD? We are not claiming that Trump and Pompeo are not to (at least partly) blame for this geopolitical malaise, but Joe Biden is the one that WILL be blamed.

Chart 5. What is bad for Biden is good for the USD 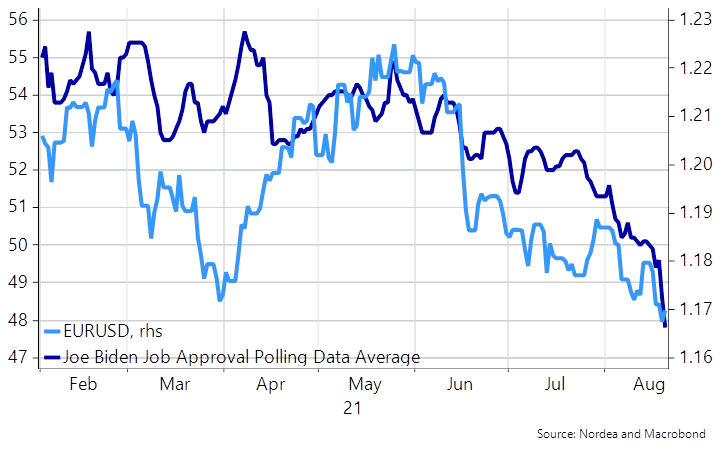 Biden may hence look towards the domestic scene for a much-needed victory, which is likely to include new hand-outs to regular people either via permanent eviction moratoriums or via extraordinary benefits running further than just through September. It is unlikely that “health-considerations” can be used as an excuse to prolong the extraordinary benefits, but it seems as if the Center for Disease Control and Prevention can basically decide on a permanent eviction moratorium due to Covid-19 reasons. If this is not crystal-clear evidence that Covid-19 is now a 100% politized disease, then we don’t know what is.

For now, we find that USD liquidity will continue to be added as the US Treasury simply needs to draw down on the cash balance due to the debt ceiling. The real or true deadline in US politics is not until the US Treasury must throw in the towel on extraordinary measures to pay bills. Don’t expect that to happen until at the very earliest during late-September or early-October. This eventually also means that the US Treasury will rebuild the cash balance relatively aggressively (and withdraw USD liquidity) through Q4. Paired with a potential first step in the tapering plan, this is a bullish USD scenario into year-end.

Chart 6. The debt ceiling pushes liquidity into the system as the US Treasury empties the cash balance 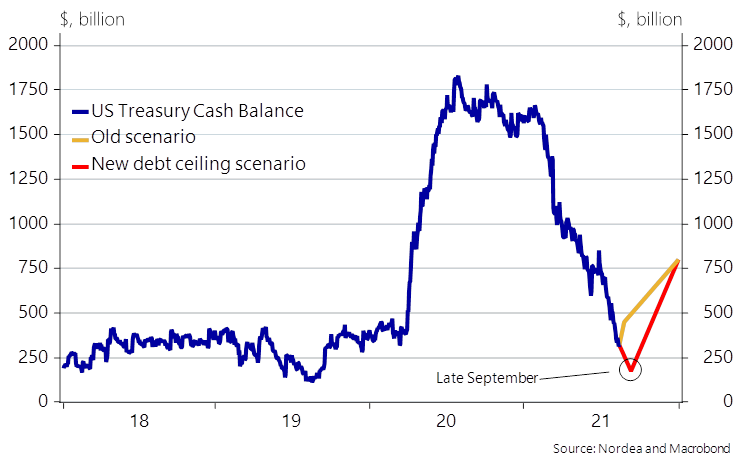 What’s up with the WHO? We don’t know.

As for the virus, new vaccination travel rules in Austria and Croatia implies that some “double-jabbed” travellers will face travel bans as early as October(!). The vaccinations, which were never about preventing infection – read up on how they were tested! – but rather to depress truly adverse outcomes, are indeed not that helpful to prevent infection (they work against severe illness). Hence authorities in some jurisdictions now demand that fully vaccinated also wear masks, stay indoors, avoid their neighbours, do not travel, and so on. What was it all for, one might wonder?

As a side note, we’d suggest that if someone – on the internet or elsewhere – mentions herd immunity but then goes only to write about vaccinations and not actual infections, we suggest you lambast them with questions why they behave in this way. Incidentally, we still don’t understand why WHO changed its (previous) textbook definitions on this topic, so as to fully ignore previously infected individuals.

Chart 7. Virus case developments a risk for us USD bulls 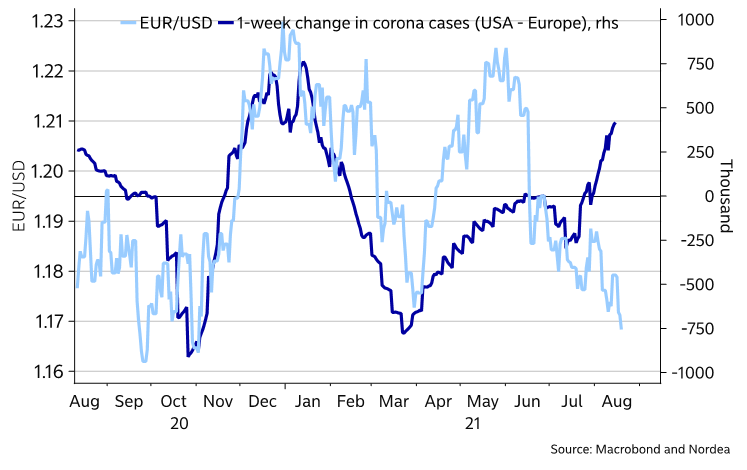 On top of this discussion, we know that Covid-19 is a seasonal disease by now, which also means that Europe will likely be faced with an infection wave this autumn no matter what. We are not as certain that politicians will chose to re-implement draconian restrictions this year compared to last year, but we still lean that way from a probability weighted perspective. Those who generally loose out in this continued lock-down approach is the “average joe” consumer in the west and the service/manufacturing labour force in EM countries, but who cares about them? Western politicians don’t.