If the Doves wanted an excuse to postpone all taper talk, then they needed to look no further than the Delta strain, yet the Fed refrained from using it as an excuse. Sometimes the things that are left unsaid are the most important. At the press conference this week Powell also dodged more than five chances to say that the Fed had not reached its inflation target, yet refrained from it.

Markets have probably read the latest set of meetings from the ECB and the Fed in a slightly dovish light, but we are not as certain. Delta is not a big issue in countries with a decent vaccination pace and we have another few months of very solid macro data in store, which should increase the chances of tapering from the Fed in particular, but also from the ECB before year-end. The relative cocktail leaves us with a USD-positive taste in our mouths, in contrast to the net outcome of the FOMC meeting this week.

Chart 1. The relationship between case counts and hospitalisations has CLEARLY weakened despite the Delta strain 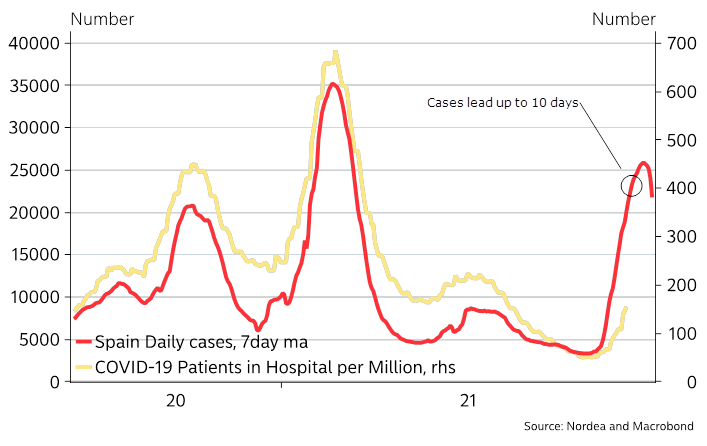 When the Fed opened the door for taper talk at the June meeting, the immediate response was to flatten 5s30s in the USD curve markedly, which is in line with the pattern we have seen in earlier balance sheet tightening cycles. When the foot is taken off the QE pedal, it leads to a weakening impulse and lower expectations, which is why long-term bond yields tend to fade, while for instance 5-year bond yields tend to gain.

The flattener trend has recently lost a bit of momentum as the taper story has faded a bit, but we remain firm that a taper scenario is in play as early as at the September meeting since it is evident that a larger and larger part of the FOMC is growing concerned over the (supply-side) inflation outlook. Powell admitted that it wasn’t the “kind of inflation the Fed was looking for” but that they had to consider the rising inflation from a risk management perspective. This is a pretty material change of wording from Powell, even if he sticks to his transitory narrative (Fed review: One out of two targets met? Tapering moving closer).

It is furthermore noteworthy that the Fed seems to be preparing for a tapering scenario via increasing the weighted average maturity of the bond purchases and via incentivizing leveraged funds to buy Treasuries with the new standing repo facility that was announced this week. Tapering is coming. 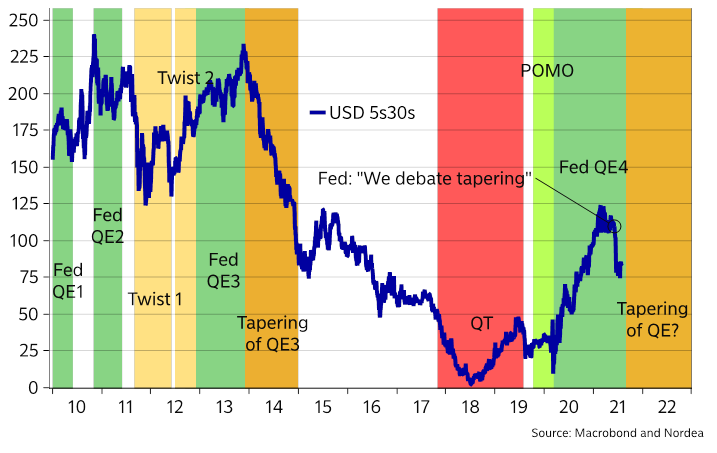 The risk for the Fed (and for our tapering forecast in general) is that the overall credit/economic impulse is starting to fade. Judging from historical correlations between the yield curve and manufacturing activity in the US, we are within one to two months of the cyclical peak, which means that key figures will likely start slowing from a momentum perspective as early as during the early autumn. As the Fed is more focused on core inflation and unemployment, both of which tend to lag the cycle, this may be of little relevance for the Fed right now, but it may make the taper sequencing process a bit more bumpy during the autumn than otherwise.

Chart 3. The cycle will likely peak in August or thereabouts … 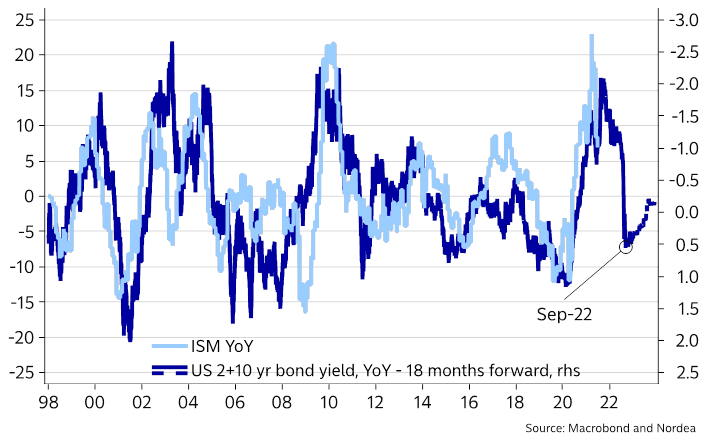 Rising Covid/Delta fears in Asia are not irrelevant to developed markets either, even if they are mostly shielded due to the vaccine roll-out. When Delta fears hit markets, safe haven flows tend to strengthen the USD, while EM inflows are subdued. Subsequently, the USD strengthens which often results in slowing growth momentum in the EM space.

Spill-overs to developed market growth are not negligible, which is particularly true when China is slowing as is currently the case. This is probably the vanilla reasoning behind the lower long bond yields. 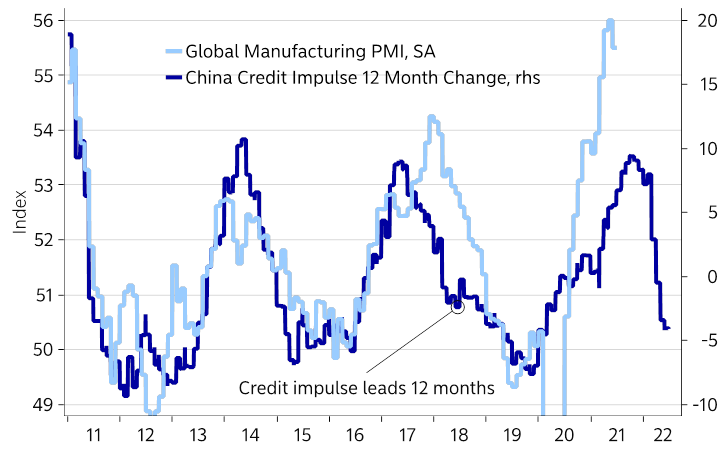 When the global manufacturing cycle rolls over, it will likely also lead to a trickier risk asset environment than what we have seen over the past 12 months. When the cycle is reflated due to a strengthening impulse from both monetary and fiscal policies, it usually leads to a smooth ride higher in equities, while developments turn substantially more bumpy when the ISM index has peaked. The pattern before/after the ISM hits 60 is quite telling in this regard. 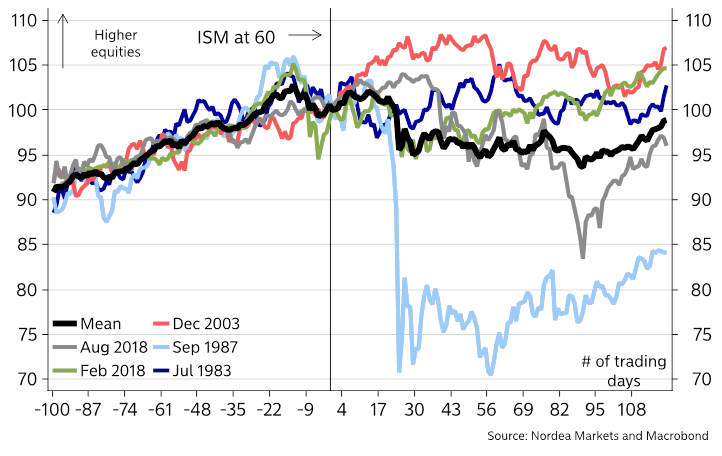 On the contrary, we have recently seen a complete landslide in 5y5y real rates, which usually sugar-coats equity valuations. We hence still lack a smoking gun before the risk asset environment turns sour. An actual tapering decision, and not just taper talk, could prove to be such a trigger, but in any case we find that the risk/reward in paying real rates has improved markedly now that the ECB strategy review is “out of the way”.

Chart 6. 5y5y real rates have seen a new low in EUR, and also a landslide in USD, sugar-coating equity valuations

It seems as if the flattening USD curve over the summer has been generally good news for Scandi bonds as well, not least the suffering Danish callables, which have posted a comeback over the past weeks. The most interesting macro story remains Norway, with a rate hike likely ahead in September, even if the market has started to doubt it a little bit. After the recent dovish pivot from the ECB, we have also seen a slight dovish repricing of the Norges Bank outlook, which is unjustified in our view.

The market is pricing 25-30bp below the June rate path from Norges Bank during 2022-23, and around 6bp below the path for the September meeting. As the structural liquidity outlook is tightening in Norway as well, it may be worthwhile betting on a hawkish development in NIBOR fixings over the coming months still. 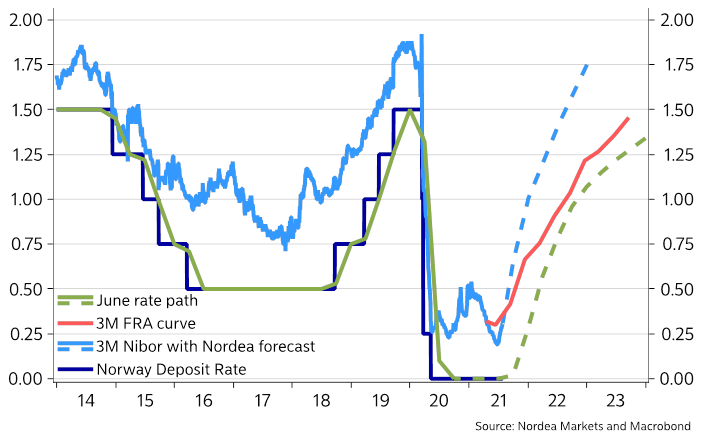 What is most important in the week ahead?

It is time for an early test of the repercussions of ending the extraordinary unemployment benefits in certain states in the US (the famous USD 300 cheques). So far, interestingly enough, it seems as if the rise in initial claims mainly stems from states that have ended the cheques early. Maybe those exact states have seen a relative increase in the labour force as restrictions are lifted?

Chart 8. Rising initial claims in states that have ended the extra benefits early? A conundrum? 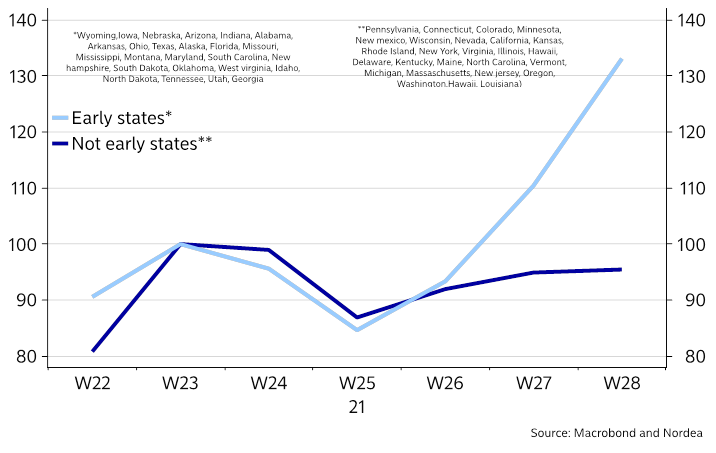 If the USD 300 cheques play a material part in the current “labour shortage”, then we should expect an outright banger of a job report in for example Florida and Texas, which have ended extra unemployment benefits early. Risk/reward favours a super-strong jobs report nationwide if these two big states deliver.

Chart 9. A timeline of states ending the extra benefits early 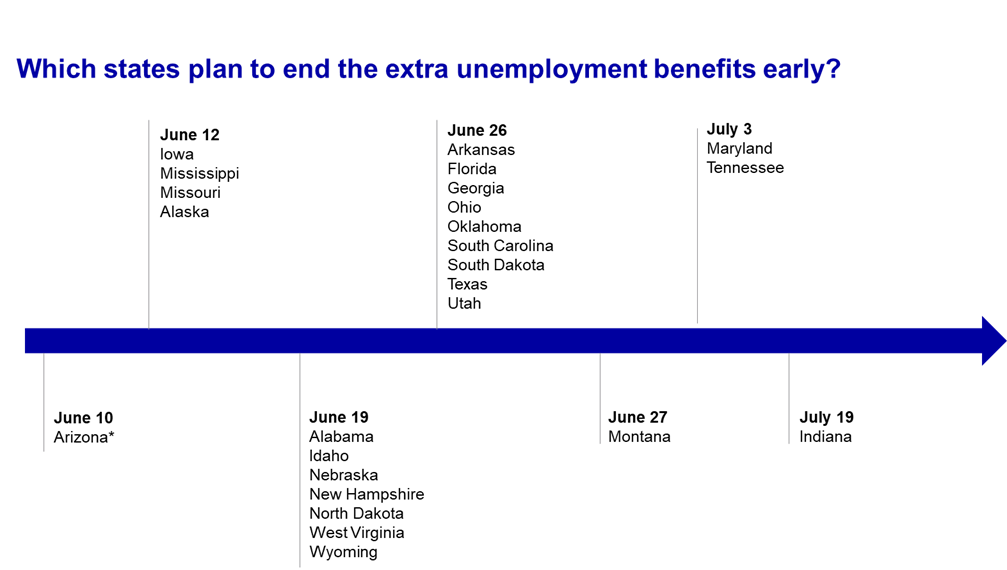 Risk/reward also favours a resurge in the ISM manufacturing index as some of the important regional surveys have generally surprised on the upside. This also goes hand in hand with the cycle indicator that we showed earlier in this analysis, pointing to a cycle high in the ISM around August. In general, we find that macro data will remain decently supportive of a more hawkish Fed in the month ahead.

Chart 10. ISM to surprise on the upside this month before heading sharply lower during the autumn? 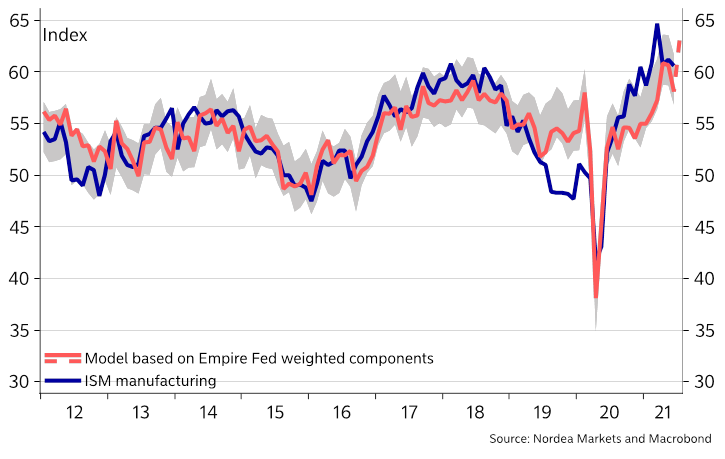 Equity markets continue to bounce back as central

Forex is getting increasingly volatile. DXY is