On Tuesday, the Australian Bureau of Statistics (ABS) released data on new finance commitments, which registered the first decline in mortgages for nine months: 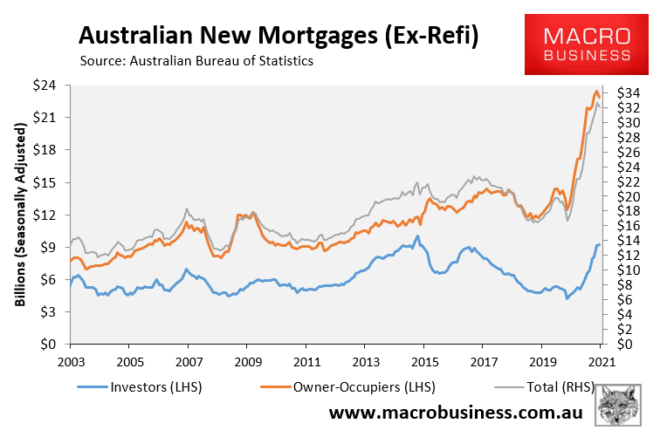 As regular readers know, the growth in new mortgage commitments has historically been correlated very strongly with dwelling value growth. The reason is straightforward: the overwhelming majority of buyers borrow to purchase a home. Therefore, when mortgage demand rises, so does property prices.

Below are a series of charts tracking the annual growth of new mortgage commitments by value against annual dwelling value growth nationally and across the five main capital city markets.

The quarterly growth in new mortgage commitments has slowed from recent highs but remains at a strong rate overall. In a similar vein, capital city dwelling value growth has also slowed from a quarterly peak of 7.1% in May to 5.9% in June: Mortgage and price growth has peaked.

Mortgage growth rebounded in June across Sydney, but remains below the recent peak. Dwelling value growth is also slowing, down from a quarterly peak of 9.3% in May to 7.7% in July: Strong growth, but down from peak.

The immediate outlook for Melbourne is for slower price growth over the second half based on slower new finance commitments. Quarterly price growth has already moderated from a peak of 5.8% in April to 4.6% in July: The immediate outlook for Brisbane is also for softer growth over the second half of 2021 based on the quarterly fall in new mortgage commitments. At this stage, quarterly price growth has only fallen marginally: Perth’s mortgage market is pointing to much slower price growth over the second half of 2021. Already, quarterly price growth has tanked from a peak of 5.0% in March to 1.6% in July: Like the other markets, mortgage demand has faded in Adelaide, pointing to slower price growth. At this stage, however, value growth has only faded slightly: 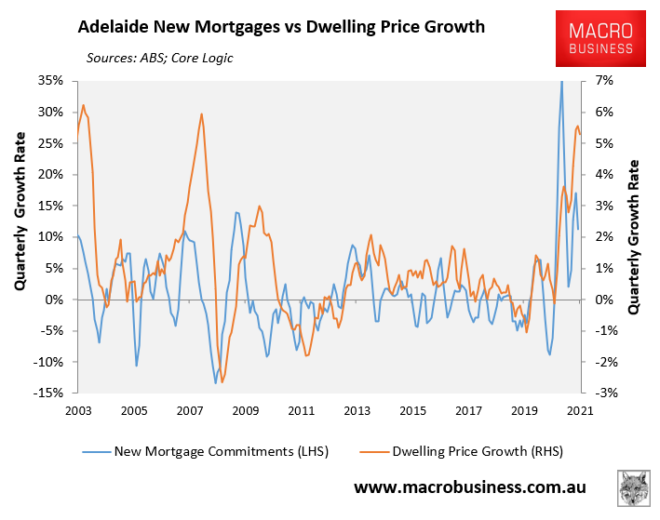 In summary, new mortgage growth has faded across all major markets, pointing to slower value growth over the remainder of 2021.