Perth’s housing market continues to behave differently from the other major capital cities.

Perth property price growth has stalled recently, while the other major capitals have roared ahead: Accordingly, Perth’s quarterly value growth is running at one-third the pace of the 5-city average: Perth is also the only major capital city market yet to rise above its pre-COVID peak.

The results are strange given Perth listings have tightened considerably, according to the REIWA, whereas sales have risen strongly: Annual mortgage growth has also shot up to record levels across Perth, which historically would have meant explosive price growth: The biggest ever mortgage boom.

The price growth in Perth also contrasts sharply with the city’s rental market, where rents have surged by an extraordinary 16.7% year-on-year – by far the highest of the major capitals: As such, Perth is the only major market where rental yields are much the same as a year ago, whereas they have compressed elsewhere.

I spoke to a Perth buyers agent last week to attempt to ascertain why Perth’s property market is lagging. Their reasons were as follows:

While these explanations make sense, it is hard to ignore that Perth’s relative valuation compared to the other capital cities is the best on records dating back to the early 1970s, thanks to 20%-plus price falls in the years leading up to COVID (also reflected in Perth’s higher rental yields above): 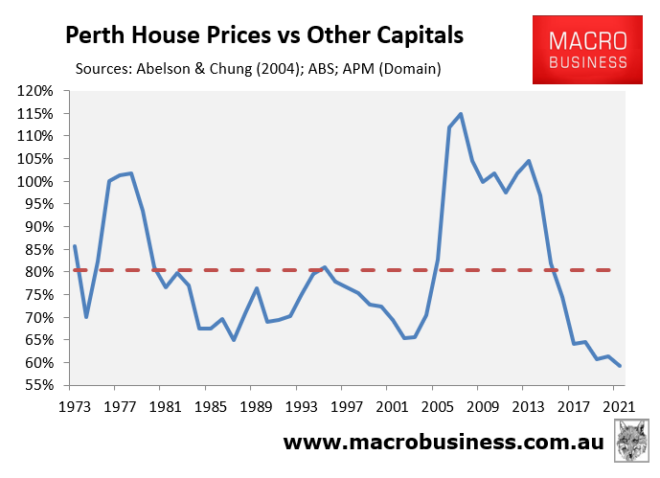 Thus, Perth could represent the tortoise racing the hare. Maybe its upswing, while more gradual, could end up lasting longer than the other major markets?