We warned a couple of months back how rising food prices risked fueling unrest in Emerging Markets, and it now seems as if several political triggers made our projection come true. South Africa, Cuba and Columbia (in May/June) are just a few examples of recent politically triggered protests that have likely been accelerated by the poverty stemming from the cocktail of high unemployment and rapidly rising food prices. We know that it is an oversimplification to point to food prices as the underlying reason for political unrest in Emerging Markets, but it is simply easier to mobilize the masses, when food prices are rising fast.

The recent resurgence of the Taliban in Afghanistan has likely also been accelerated by rising food prices as the Taliban controls large parts of the Afghani supply chain making it easier to recruit when prices are high. This is the first test of Bidens resiliency as it coincides with the American withdrawal strategy. Will “Bombing Biden” start re-thinking the withdrawal? We sadly think so.

There are 1987 words left in this subscriber-only article. 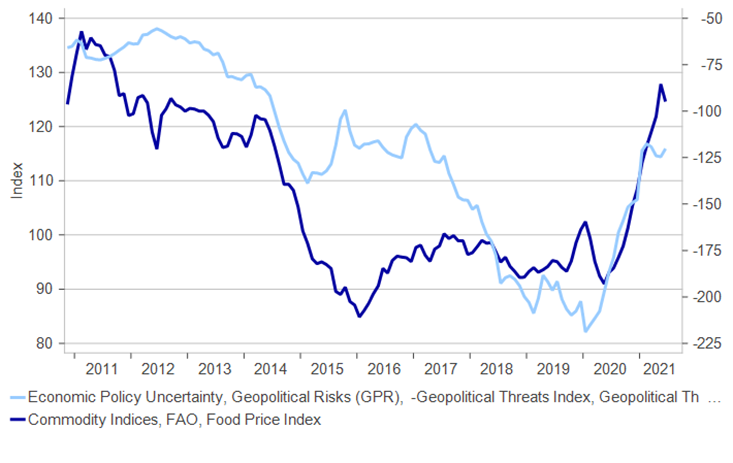 Markets have started following the QT-playbook recently, and while some may argue that idiosyncratic events are behind most of the weakness seen in the riskier parts of the EM space during June and July, we would argue that it fits the story of a weakening USD liquidity impulse. When USD liquidity worsens, the riskiest part of the EM space is hit first, while an underperformance in small-cap follows as money is pulled inwards on the risk curve. This is exactly what happens currently, even if seems a bit premature to debate actual liquidity withdrawals (ex the reverse repos from the Fed).

This is also an underappreciated driver of bond performance during a liquidity withdrawal scenario. When funds are pulled inwards on the risk curve, bonds tend to perform, even if the net purchases of central banks are slowing.

Chart 2. The QE and QT playbooks.. Markets are currently in QT playbook mode..

The USD has also staged a comeback alongside the weakening liquidity impulse, and we expect more to be coming. The difference between USD and EUR core inflation is at all time highs, which may provide an early hint that a strong USD move is on the cards.

The simple modus operandi is the following. When core inflation surprises to the upside in the US but to the downside in the Euro area, it simply leads to a wider gap policy wise between the Fed and the ECB after a time-lag. This seems likely for H2-2021 as well, in particular now that Lagarde has openly hinted that the ECB forward guidance will be solidified already next week.

Chart 3: Relative core inflation points to a strong USD comeback during the second half of this year 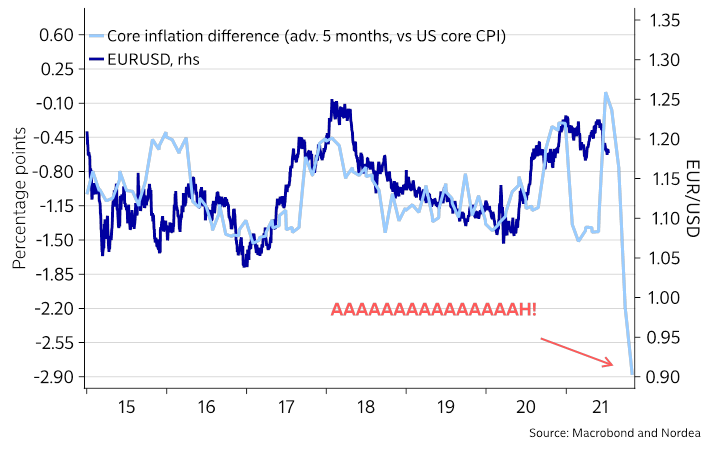 The USD is accordingly up against all EM-10 currencies over the past month, and if we should pick a relative winner in EM space currently, then we would look towards BRL or MXN. The terms of trade have moved in a supportive direction for Brazil for a while among other things due to a rally in oil- and soybean prices, why Brazil is also relatively well-positioned to deal with the surge in food prices.

Lat-Am is generally also in a better position than parts of Asia in the relative vaccination-race, which makes intraregional-EM bets interesting to look into. We like a long carry trade in MXN (or BRL) versus PHP as a structural trade for H2. We add a long MXN/PHP trade with a target of 2.8775 and a stop loss at 2.3550.

Chart 4. Lat-Am FX the least under pressure versus USD in EM10 over the past month 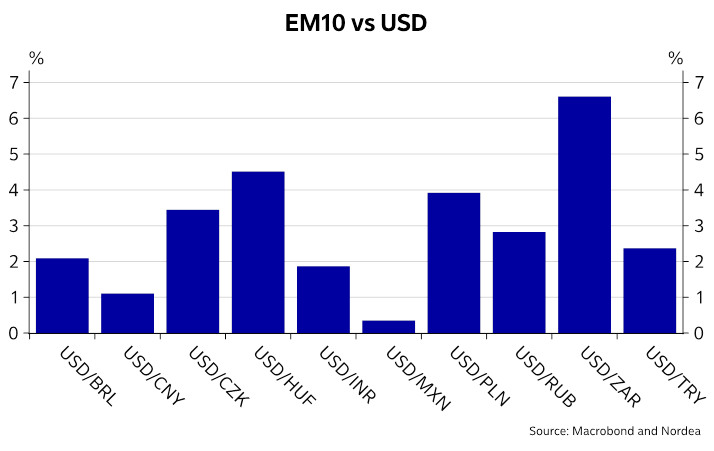 The underlying driver of the anticipated weakening of the USD liquidity impulse is the tapering prospects from the Fed. It may  be that rates markets are not scared of rising actual inflation, but they seem to conclude that the Fed will react to rising prices via an agressive tapering process, which is usually equal to a flattening yield curve as we see right now.

It is simply still too easy to explain the current inflation pressure away as “transitory” since it is driven by only a few, albeit important, subcomponents of the consumer basket. Used cars was the main culprit again this month, but we should be close to a peak in car prices, even if we will see another rise in the July figures released in August. 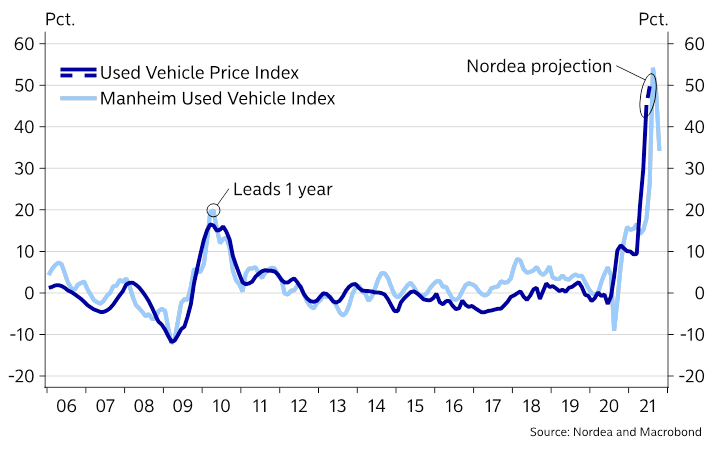 We hence consider the below inflationary playbook intact, while we have likely moved towards the confirmation phase that used cars-, energy and food prices are all close to peaking, which will fuel the transitionista narrative during July and August – likely leading to even lower long bond yields and a flattening yield curve.

Chart 6: The inflationary playbook is still alive and kicking. Watch out for the late Autumn 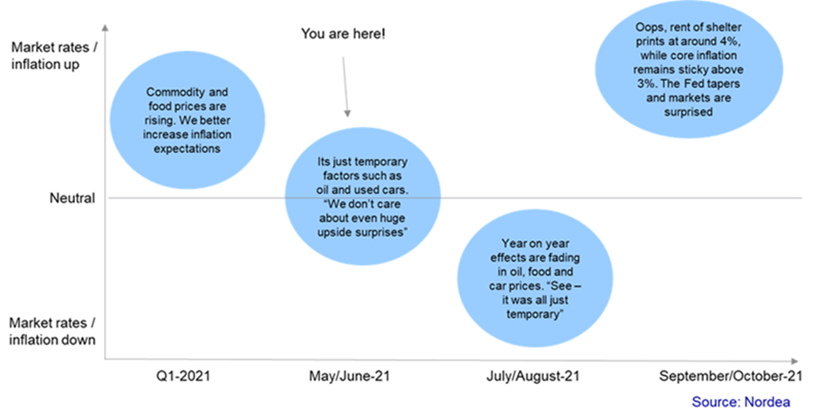 The next inflationary culprit will likely prove to be the shelter cost, which is a much more important part of the consumer basket than used cars. We find it likely that yearly shelter costs will rise by as much as 4.5% before year-end, leaving the core inflation clearly above 3% for the next 9-12 months.

This viewpoint is also backed by real-time rental costs from the Apartment List. This is likely to matter for the boomers within the FOMC, and leaves a potential aggressive tapering upcoming.

Stay long USD and receive in the EURUSD xCcy basis.

Chart 7: Rent of shelter costs to drive inflation over the coming 3-4 quarters 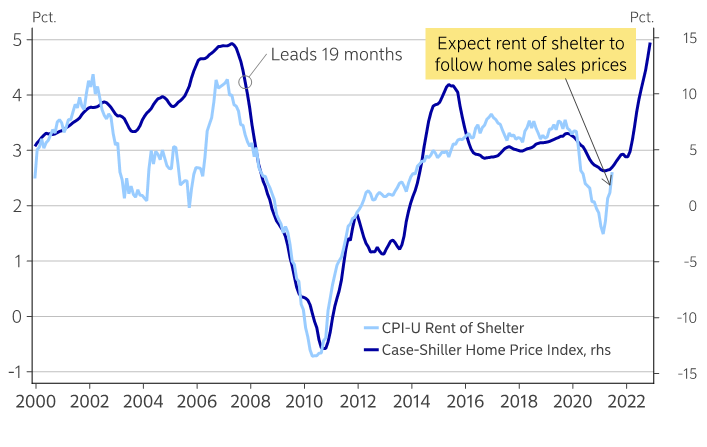 The ECB, on the other hand, looks to dove things up this week as Lagarde openly wants to solidify the forward guidance now that the strategic review ended up in a big boring compromise. We already have stories about a potential disagreement within the rates committee ahead of the meeting, which bodes well for a dovish surprise.

Without major disagreements prior to the meeting between the “North” and the “South” of the board, one shouldn’t expect a material bolstering of the forward guidance, but now it actually seems to be in scope. We expect a super-dovish Lagarde, as she simply wants to re-exemplify who’s running the ECB after the lukewarm strategic review.

The 10yr EU bond is trading more or less spot on the 10yr Eonia swap at roughly -10 bps, meaning that Euro area bonds are now effectively return-free risk (on average) all the way out to the 10yr point, which only makes sense as long as the ECB backs up the market relentlessly month after month – but that is not going to change anytime soon. 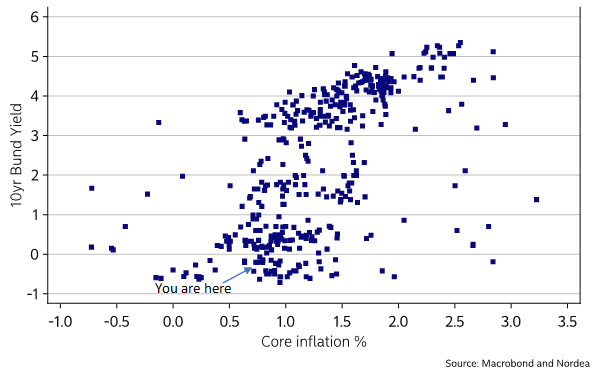 It is more debatable whether the US Treasury market trades close to “fair values”. The current 10yr bond yield is almost 4 percentage points lower than the second-lowest reading given a core inflation of 4.5%, which makes it look almost bizarre on the below scatter-plot. We lean long in >7yr bonds in both EUR and USD anyway as we consider a complete positioning washout a prerequisite for another leg higher in bond yields into the early autumn, when the rent of shelter costs start exploding in the US.

Chart 9: Never has the 10yr treasury yield traded as low as this with core inflation closing in on 5% 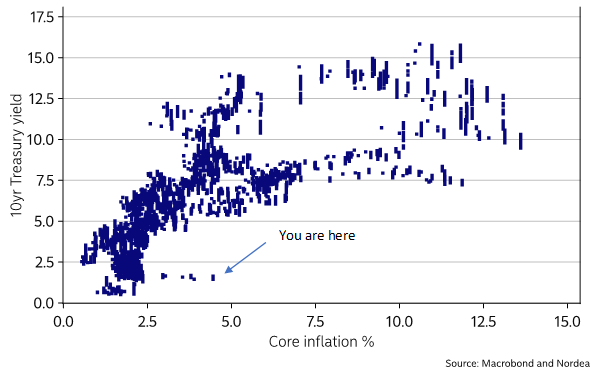 Finally, one for the inflationista connoisseurs – the (almost) complete heatmap of the US inflation pressures. Car rentals, airline fares and accommodation are the main inflationary culprits outside of used cars and trucks. Good thing that I didn’t fly to Greece, to rent a car and go to a hotel for two weeks. Or wait, did I? Enough poolside rambling for this week. The next weekly will be written and published back in lovely Scandinavia.

Best wishes for the summer to all of you!

Chart 10: A heat-map of inflation components in the US in YoY terms, %

Asian stocks markets are having another mixed

A strange one-two punch overnight on the back of

Forex markets took a walk on the wild side on

A bit more calm has returned to Chinese equity