Nordea with the note. I agree with all of it except the Fed hikes. For me, it is still more likely that it is forced backwards not forwards:

Covid or rather Delta is back in the limelight as cases surge in e.g., UK and Spain, but the most interesting thing is now to follow the hospitalization data and not the case data, as it seems as if widespread vaccinations among risk groups have decoupled the relationship between cases and hospitalizations. It may be early days still, but the authors of this piece are tempted to claim that the Covid crisis is already over in countries with a decently efficient vaccination program.

The link between cases and hospitalizations, as we knew it from 2020, seems to be broken as the vaccine effectively shields against severe illness. To take an example from a country with an efficient vaccination program. Denmark has had between 0 and 1 daily fatal Covid cases since the late spring. That is around 0.33% of total daily fatalities in Denmark. It seems almost hysterical to keep focusing on lockdowns, border restrictions and the like when there is clearly no health crisis related to Covid-19 any longer from a pure data perspective. The jury is still out, but we find increasingly compelling evidence that the crisis is essentially over (in the West). Let’s move on.

Did you by the way know that you count as a Covid-patient, if you have tested positive within two weeks of the actual hospitalization? It means that you count as a Covid-patient, even if you go to the hospital due to a broken leg. So far, no one has tried to improve the data quality, but obviously the amount of hospitalized Covid patients increase when there are more cases as per se, if this definition is kept intact – no matter whether it’s a health crisis or not.

Chart 1. The disconnect between cases and hospitalizations is a reality in Spain, UK, and other countries. The vaccine works! 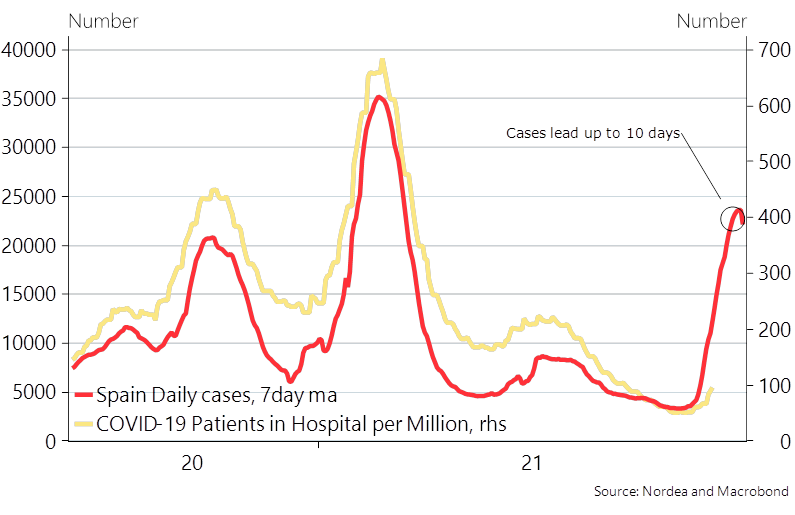 Spain is currently highlighted as THE risk case of the Euro zone. We are yet to see a pick-up in hospitalizations worth mentioning (given the virus spread) but it is likely to keep markets busy at least another few weeks until a confirmation of few hospitalizations and relatively limited restrictions is in place.

In countries, with a weak or no vaccination program, Delta is likely to become a pain with Australia and Asian countries as clear examples. This is also likely a contributing factor behind calls for a complete u-turn from the RBA in the tapering process, while also the ECB partly used it as an excuse to solidify an already dovish forward guidance as they assume that substantial restrictions will be in place in the Euro zone until early 2022.

So why are long bond yields falling, if we shouldn’t be scared by the Delta variant? Well, sadly not every country is as far as e.g., the Euro zone average when it comes to the vaccination process of the population. A good example is Asia, which did well as a region when containment measures were the name of game, while they lag severely behind now that the vaccination process is the most important measure. It is both surprising and impressive how several Lat-Am countries have managed to outpace even developed parts of Asia in the vaccine roll-out, which means that we are still positive on Lat-Am vs. Asian on a relative value basis just due to relative Covid considerations.

Chart 2. Why delta-fears in Asia lead to weaker growth in developed markets

Rising Covid/Delta fears in Asia are not irrelevant to developed markets, even if they are mostly shielded due to the vaccine roll-out. When delta-fears hit markets, haven flows tend to strengthen the USD, while EM inflows are subdued. Subsequently, the USD strengthens which often results in a slowing growth momentum in the EM space, not least in countries dependent on a cheap USD funding wise. Spillovers to developed market growth are not neglectable, which is particularly true when China is slowing as is currently the case. This is probably the vanilla reasoning behind the lower long bond yields, if it is not driven by early tapering prospects from the Fed. The good news is that it will lead a renewed rebound in activity in to 2022 due to the lagged impulses seen from lower bond yields this summer.

What’s more, the Fed has stealth-twisted its bond portfolio in recent months, buying fewer bills and more bonds, which in turn “below the surface” has been a contributing factor in the re-flattening of the USD curve. This trend is likely to be slightly reversed when the T-bill issuance is re-accelerated. We continue to lean long bonds and like curve flatteners tactically, but we will get another wave higher in rates in to 2022 at the latest.

Chart 3. A stealth-Twist operation in place from the Fed? 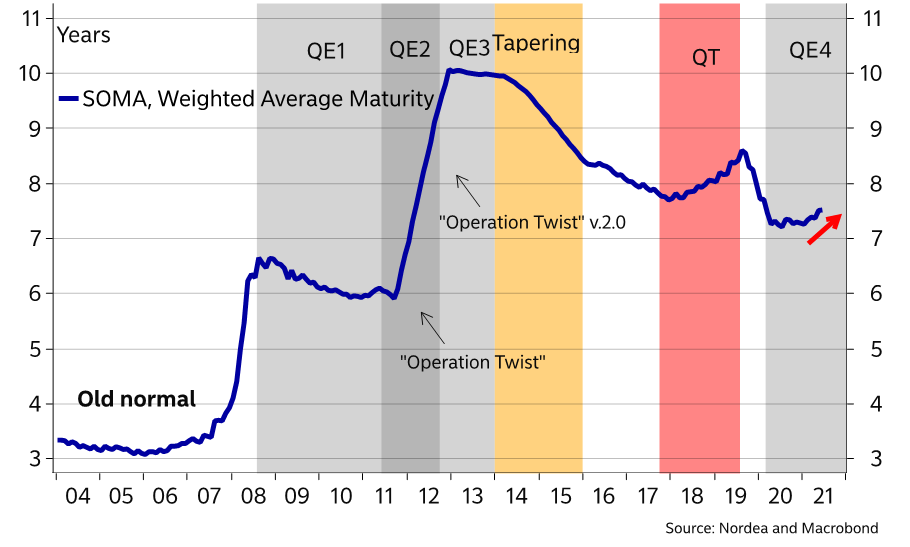 The Chinese credit impulse has played an increasingly important role in the global market. When Chinese credit rolls-overs, it is time to buy USD and longer-dated bonds with a time lag. This may be exactly what is happening currently, potentially sparked by the early tapering process from the Fed.

When the Fed tapers while the global credit cycle is already rolling over, it leads to a weakening nominal growth trend over time, while the current (allegedly transitory) inflation pressures keep break-evens elevated. The bottom-line is that real-rates are back at Covid-19 lows, which seems a bit odd given that the Fed is about to pull the tapering trigger. Risk/reward is starting to favor higher real rates again despite a slowing credit impulse.

Chart 4. The Chinese credit impulse points at lower long bond yields even if the inflationary outlook tells a different story 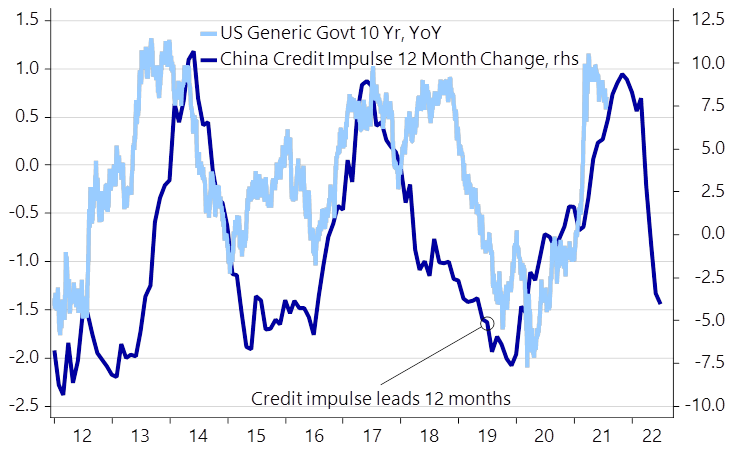 EM as a broad “asset class” is likely to struggle into this kind of environment, why we warrant caution on general carry strategies over the course of August. We keep relative bets in place but find that an earlier than anticipated tapering environment is bad news in general for the EM space as they thrive from cheap USD liquidity and funding. USD liquidity remains unchanged at best as the ON RRP swallows the added liquidity.

Chart 5. EM FX vs. the Chinese credit impulse. Time to underweight EM as an asset class? 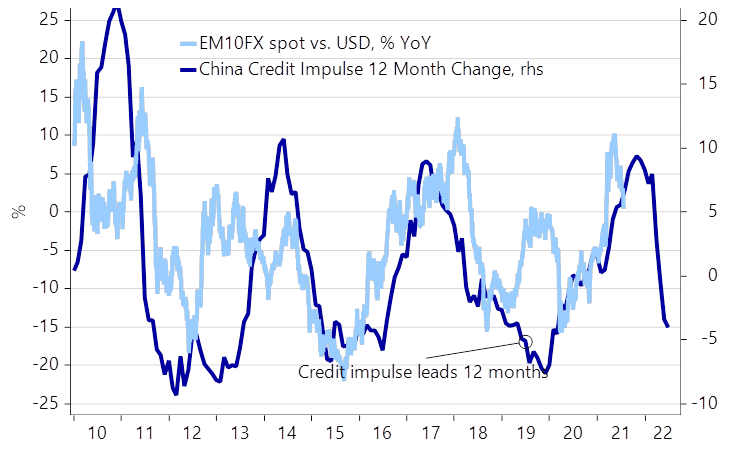 Should the debt ceiling problem turn into a real one, we may be in for an additional 200bn USD in liquidity added from the drawdown of the TGA, but it seems as if the ON RRP will swallow all of it as long as the collateral is as scarce as currently (limited bill issuance).

The ON RRP usage peaked just below 1trn USD before quarter-turn, but we find it likely that the facility will run at a >1 $ trillion size during late July, if the debt ceiling is not resolved. In other words, USD liquidity has already effectively peaked despite QE and a drawdown of the TGA. During Q3 the TGA will likely rebuilt, which could even lead to a negative liquidity impulse.

Chart 6. Will the ON RRP usage surpass 1trn before month-end due to the debt ceiling? USD liquidity remains peakish 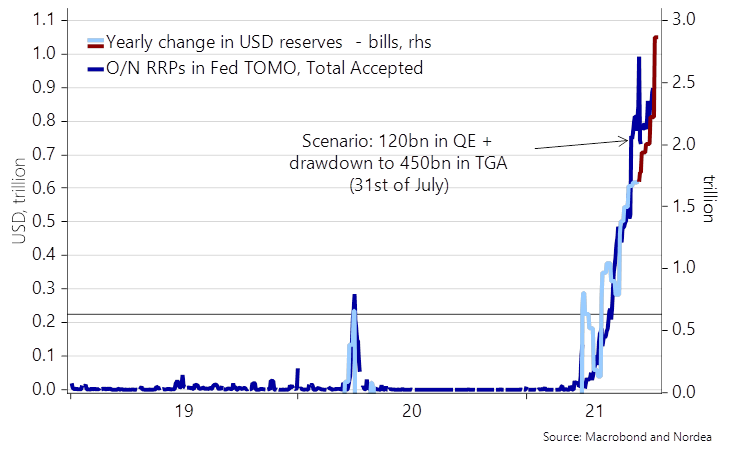 Even if this is technical USD positive news and potentially a story that could make the USD more expensive in the xCcy basis, there are also simpler reasons why the USD may stand strong. The updated projections from the Congressional Budget Office are in line with a positive output gap and record low unemployment already in early 2022, which would usually go hand in hand with a Fed funds rate about to be hiked.

We have probably never seen a positive output gap without a subsequent reaction from the Fed. Will this time be different? We bet not and wouldn’t be overly surprised if a hike is in play already during H1-2022 or during the late summer that year – yes, we said that. 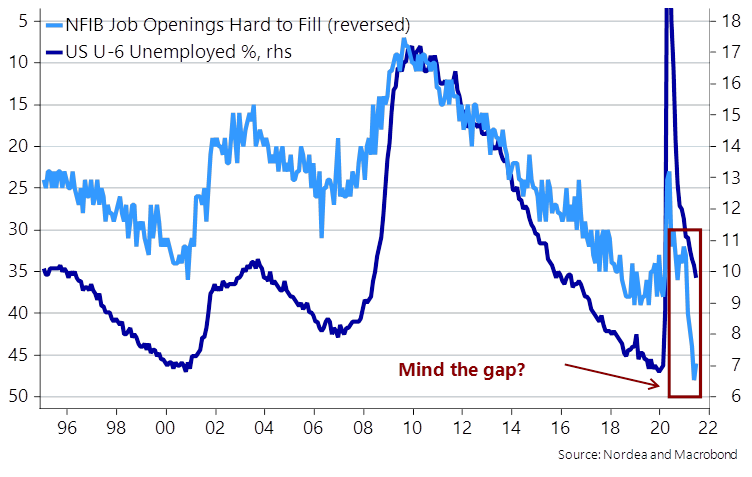 The inflationary outlook remains hotter than seen in a long while as a lagged consequence of the credit creation seen during 2020. Our favourite “real money” measure is M2 – USD reserves (stuck in intrabank activity), and the growth in that exact money printing measure was material in 2020. The inflationary impulse from credit creation is already fading again though, which leaves a less scarry inflation outlook likely for 2022. 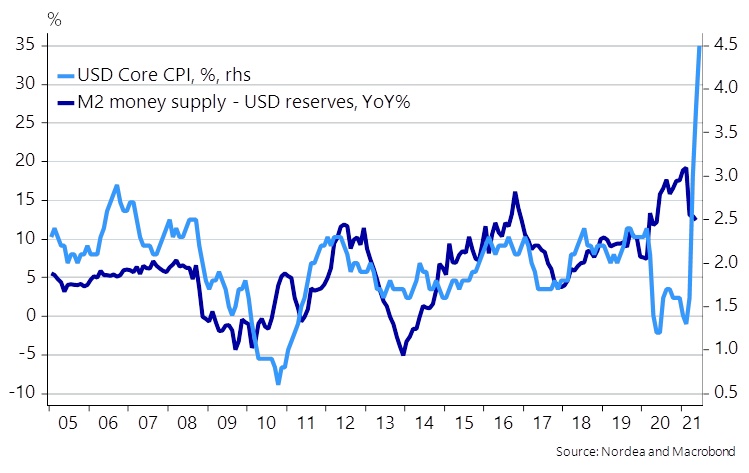 Lastly, the below chart made the rounds over the past week as it shows how China is playing an increasingly important role in global trade. We find (at least) three medium- to long-term consequences of China being the preferred trade partner for most countries worldwide. 1) The renminbi will be increasingly “reservenized” over the coming decades as increasing amounts of global trade will be settled in Yuan, 2) The US – Chinese proxy cold war via trade conflicts will continue to escalate over the coming decades and 3) the USD will be put under increasing pressure structurally. The launch of the Chinese E-Yuan could hence prove to be the most interesting macro story of 2022.

We remain long USD/SEK (and like USD versus all Scandis for now), short AUD/NZD and long MXN/PHP. 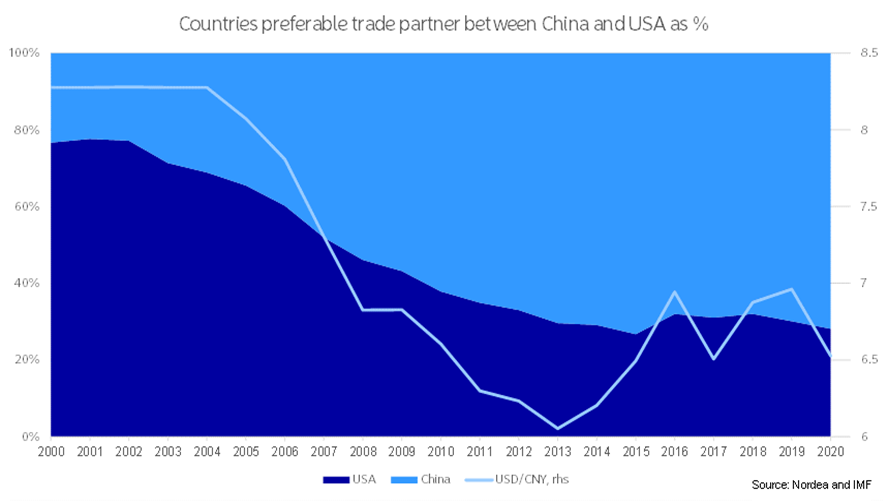 NSW Health has recorded another 961 locally

Victoria has recorded another 779 locally

NSW Health has recorded another 1007 locally

As Melburnians awake to another miserable cold