Nordea with the note. The short answer is nope:

Germany will get a new Chancellor after the September elections and the course of German policies could change materially. The election result will have important consequences for financial markets as well.

Has the German stance on European integration and fiscal discipline changed for good? The answer to that question will to a large extent depend on the results of the parliamentary, or Bundestag, elections on 26 September.

Following years of strict budget discipline, Germany provided one of the largest fiscal stimulus boosts in Europe last year. Another major German red line was crossed when the EU recovery fund was established; it not only finances the initiative with common EU bonds but also distributes the bulk of the aid in the form of grants to members states, that is, fiscal transfers.

Chancellor Merkel, who has led Germany for more than 15 years, will step down later this year, so it is already certain that Germany will get a new leader. Further, current polling strongly suggests that the current coalition government between the conservative Christian Democratic Union, the Christian Social Union (CDU/CSU) and the Social Democrats (SPD) will not continue, so the composition of the government is set to change as well.

The CDU/CSU reportedly continue to favour lower taxes, but only if public finances allow, a return to a balanced budget as soon as possible and a firm rejection of common Euro-area bonds. The Greens, on the other hand, are campaigning for large-scale public spending programmes, modifications to the so-called debt brake (see more below), higher taxes, further European integration and of course aggressive climate targets. The two current front-runners, according to the latest polls, thus have very different policy goals, and the outcome of the election will have consequences for financial markets as well. 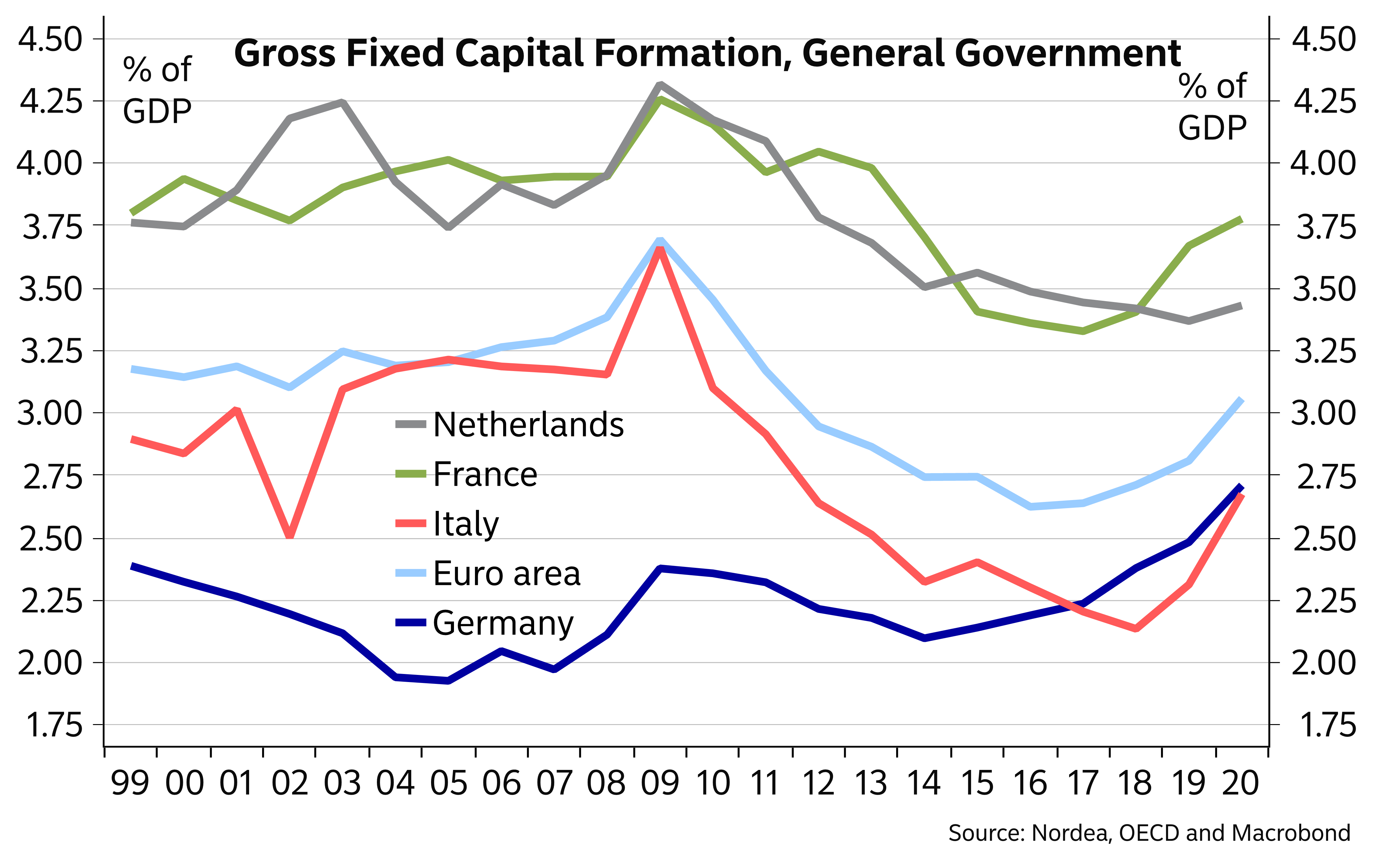 Who will lead the next government?

After the Greens chose Annalena Baerbock as its candidate for chancellor, while the CDU’s candidate Armin Laschet failed to inspire the Germans, the Greens briefly overtook the CDU/CSU as the largest party in the polls. Support for the Greens has since waned, in part because of some gaffes by Baerbock, and the CDU/CSU are back in the lead. Still, the CDU/CSU are currently polling clearly below 30%, far below the around 33% they scored in 2017.

The liberal Free Democratic Party (FDP) has been gaining recently in the polls, gaining on the SPD and opening more options for the post-election coalition.

The other parties have excluded co-operation with the Alternative for Germany (AfD), which is currently polling at just above 10%, while the Left party is unlikely to be high among preferred coalition partners either.

Below, we look at the most likely coalition options and try to estimate how financial markets would react if the chances of such coalitions increased. The longer-term market consequences will naturally depend a lot on what kind of policies will eventually be implemented, which is likely to fall clearly short of what the individual parties are campaigning for ahead of the vote. 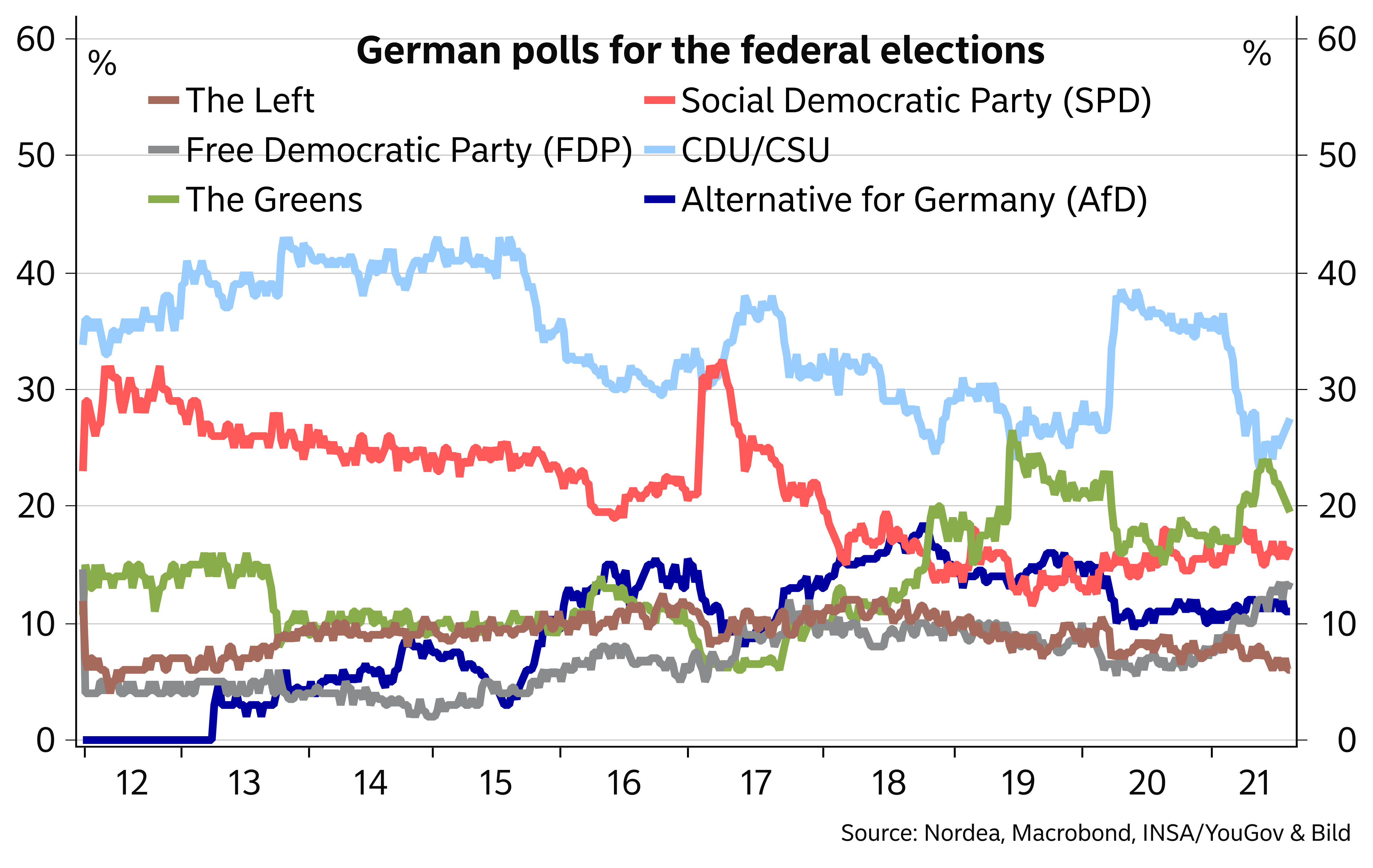 The most likely government after the September vote will be led by the CDU/CSU and include also the Greens and possibly the FDP as well (so-called Jamaica coalition, as the colours of the parties would match the colours in the Jamaican flag). Depending on the exact relative shares of the participating parties, we would expect such a government to commit to relatively strict climate targets and a limited public investment programme (priorities for the Greens), a return to a balanced budget without any significant tax hikes (a priority for the CDU/CSU) and a return to somewhat more flexible EU fiscal rules (compromise between the parties).

Being a baseline scenario, the formation of such a government would probably not have big short-term market consequences. If the Greens were able to persuade the CDU/CSU into supporting even some relaxation of the debt brake, though unlikely, then the result would probably be a larger public spending programme and with that higher bond yields and a stronger euro.

The Greens could seek to build a government with the SPD and FDP instead, even if they were not the largest party (so-called traffic-light coalition). Such a government would make a large public investment programme and further European integration more likely, though by no means sure, as the FDP would be against large-scale spending programmes and European initiatives. In addition, the debt brake could still seriously limit how much debt-financed investment such a government could provide, as changing the Constitution would probably be out of reach.

Rising chances of such a government would probably put upward pressure on bond yields and the EUR and lead to narrower intra-Euro-area bond spreads due to the higher likelihood of a more supportive German stance towards Euro-area or EU level support mechanisms. Equities would likely record gains on the back of easy fiscal policies.

Even if the election outcome allowed for the formation of such a government, the FDP would clearly rather enter a government with the CDU/CSU, as its ideology is much more closely aligned with them. In fact, there are already signs that the CDU/CSU want to buy allegiance from the FDP by including issues important to the FDP in their agenda.

A majority government could probably also be formed between the CDU/CSU, the SPD and the FDP (so-called Germany coalition). We would expect such a coalition to favour rather strict fiscal policies, a strong commitment towards the debt brake and a return to relatively firm EU fiscal rules.

The outlook for such a government being formed could put weakening pressure on the EUR due to higher chances of less stimulative fiscal policies and higher risks towards the future of the Euro area, downward pressure on German bond yields and equities and upward pressure on intra-Euro-area bond spreads.

The likelihood of such a government is limited by the probable reluctance of the SPD to enter into another coalition with the CDU/CSU, as their support has not exactly been boosted by their past co-operation with the CDU/CSU. However, if the talks between other parties to form a government failed, as happened after the 2017 elections, the SPD could reconsider its stance.

The Greens + SPD + the Left

The Greens could also seek to build a government with the SPD and the Left, arguably a government that could lead to a major change in the course of German politics. Such a government would probably seek a large-scale public investment programme, financed as much as possible with new debt. The debt brake could again put some limits to such plans and force financing with sizable tax hikes instead. Such a government could also seek more investment spending on EU level financed by more joint EU borrowing, and could even call for more help from the ECB to finance such spending, but would probably also favour more labour market regulation.

We would expect an increasing probability of such a government to be associated with higher uncertainty and higher market volatility. The higher public investment programmes would support the euro and higher bond yields, but the burden of increased regulation and higher taxes would work in the other direction. More EU-level support measures would support narrower spreads, but such moves could be limited by an increase in general uncertainty due to market concerns that such a government could venture too much to the left. The equity market could also be hit by the higher uncertainty, at least initially.

The Left party has had many controversial ideas, such as a hostile stance towards NATO, which limits its chances of entering a coalition government. Further, current polling does not support the formation of such a government. 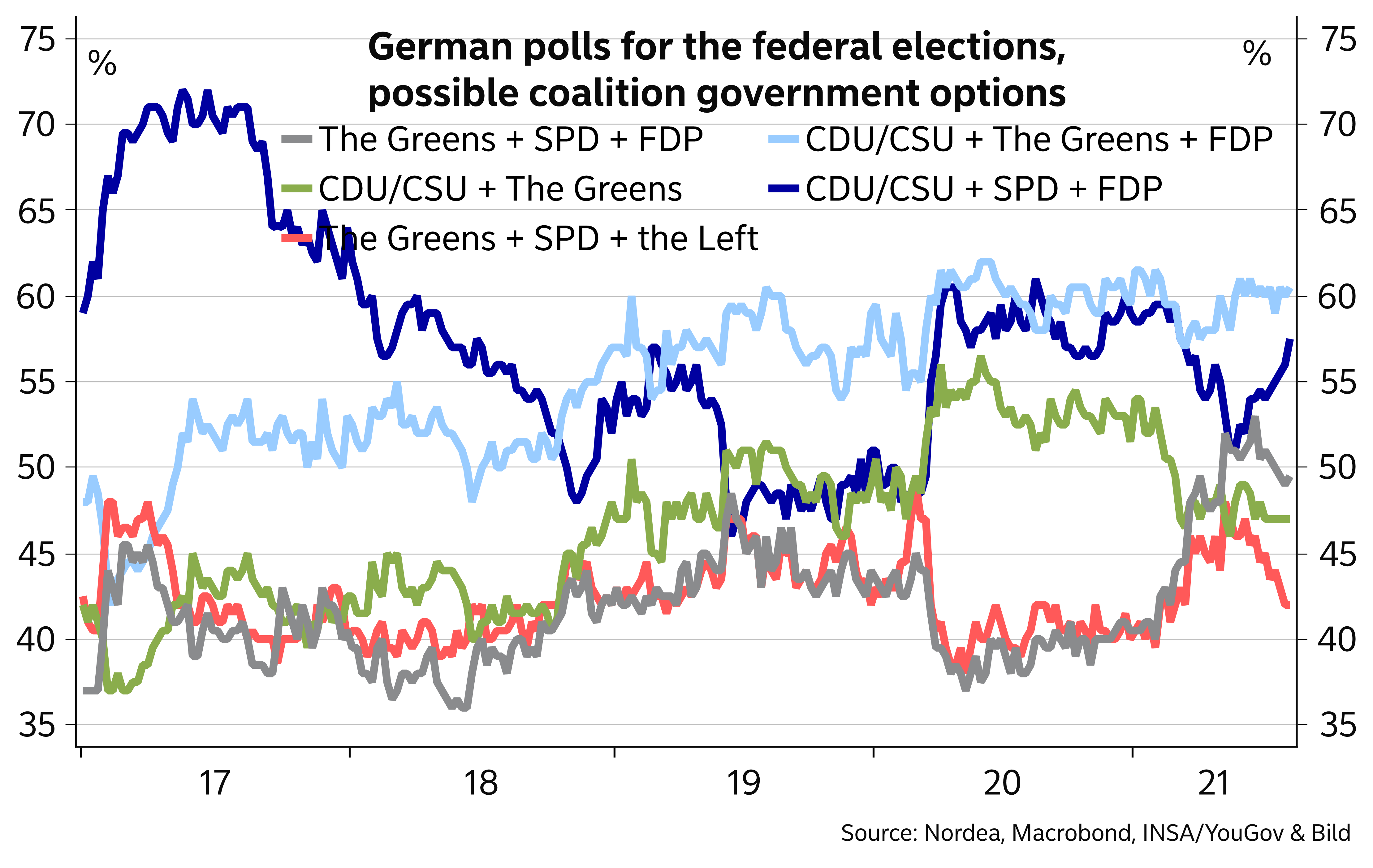 How big an obstacle is the debt brake?

The German Constitution includes a so-called debt brake, which limits the structural federal government deficit to 0.35% of GDP and prohibits the states from running any structural deficits. There is an escape clause stating that the borrowing limit may be exceeded in emergency situations that are outside the control of the government and have a major impact on the financial position of the government, such as natural disasters. Normal cyclical downturns do not qualify, but the Covid-19 crisis obviously did, and the debt brake is currently suspended.

However, the debt brake also requires a repayment plan for the excess debt accumulated in the emergency situations, which limits the room for fiscal measures in the future. The suspension of the debt brake could be continued for longer, but the current government stance has been to return to the debt brake limitations relatively swiftly, which could mean a relatively rapid fiscal consolidation going forward.

The German stability plan foresees a general government deficit of 9% of GDP for this year, falling to 3% next year and a balanced budget in 2025. Some forecasters expect a much more rapid fiscal consolidation, with e.g. the IMF forecasting a general government surplus as early as 2023, a much stronger move compared to the other large Euro-area countries.

Again, much will depend on the outcome of the autumn elections. The Greens and the Left are the only ones openly calling for changes to the debt brake. As the brake is part of the Constitution, changing it would require a majority of two-thirds in both the Bundestag and the Bundesrat (see more below on the role of the Bundesrat), which is a tall order.

The CDU/CSU have been big supporters of the debt brake and are highly unlikely to support change to the debt brake at least outside the government. They might, however, be persuaded to limited changes, such as excluding certain investment spending from the rule, as part of a coalition government agreement, especially if they would otherwise be threatened with exclusion from the government.

The FDP and SPD have not argued in favour of changing the debt brake, but both are likely to show some flexibility on the matter in potential government negotiations, while especially the SPD might support changes also in opposition.

There is also some leeway with the debt brake. The federal government has various special purpose-vehicle type funds, which could be tapped for some spending. In addition, investing in such vehicles could be possible without breaching the debt brake. However, it looks doubtful that such loopholes would be used on a large scale to bypass the debt brake. 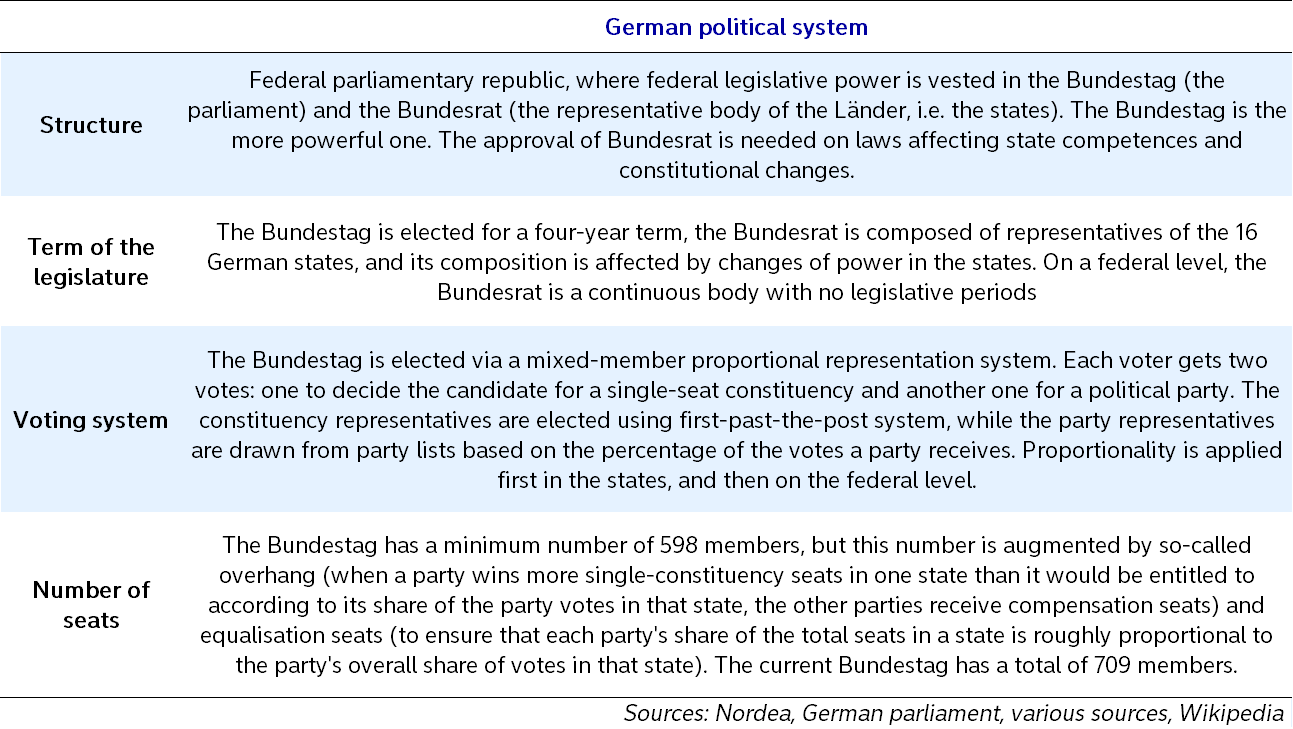